Life in the Extreme: Hydrothermal Vents

Somewhere below the sea

Deep in the dark waters of Earth’s oceans and seas are bubbling chimneys and cauldrons of energy that support diverse ecosystems unlike anything we see at the surface of our home planet.

When traveling down below the Earth’s surface, we find a layer of molten material known as magma. Heat from this searing hot material can affect layers of the planet above it, warming subsurface water. At some locations deep below the seas and oceans of Earth this water can escape, venting out into the surrounding environment to form what we call hydrothermal vents. 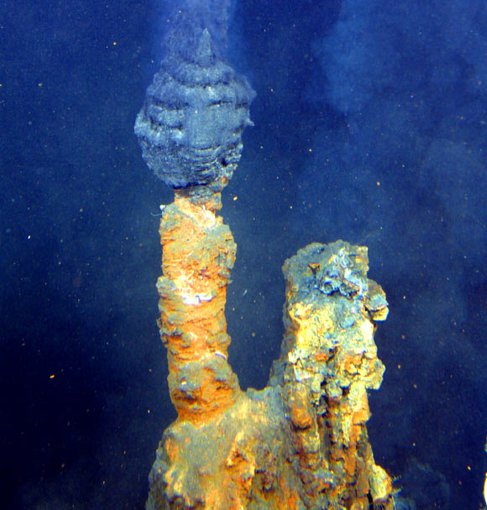 Image of a hydrothermal vent. 'Hydro' is for water, 'thermal' is for temperature, and 'vent' is for the release of matter.Image credit: NOAA.

Hydrothermal vents bear some similarities to terrestrial hot springs, where geothermally heated water seeps up from deep below the ground. However, hydrothermal vents are found underwater and in the dark. Sunlight can only travel so far through water (depending, of course, on how clear the water is). In crystal-clear water, light might reach around 1,000 meters at most. This is important for life because most life on Earth is dependent upon energy from the Sun. Photosynthetic organisms (like plants) utilize sunlight to produce molecules (like sugars and carbohydrates) that are the basis of food chains for the surface biosphere. It’s a different story for life around hydrothermal vents.

The first hydrothermal vent was discovered in 1977, when a team of researchers traced spikes in water temperature around a mid-ocean ridge known as the Galapagos Rift. They sent a camera underwater and captured intriguing photos on 35 millimeter film. The next day, the robotic submersible Alvin was deployed and provided phenomenal views of a never-before-seen ecosystem. Hydrothermal vents erupted with plumes of dark ‘smoke’, and they were surrounded by diverse communities of organisms large and small. 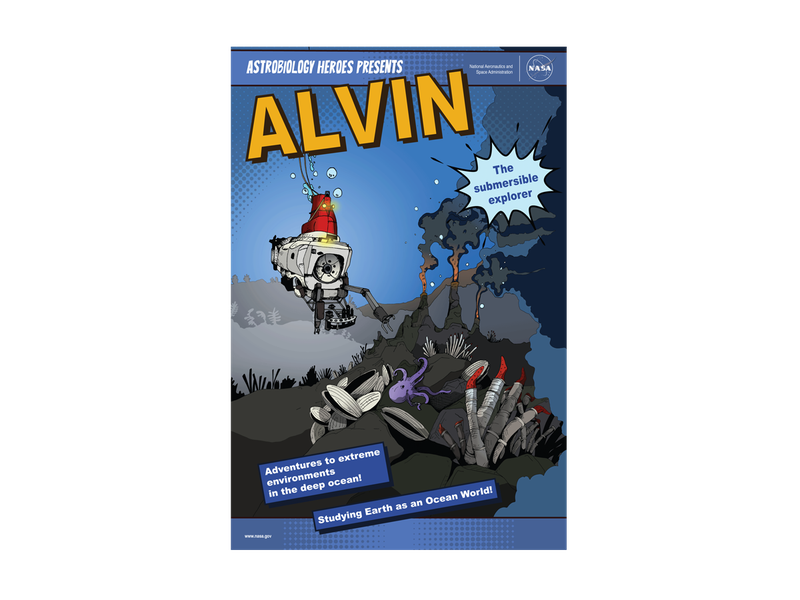 With the discovery of hydrothermal vents on the ocean floor, Alvin helped change theories of habitability in the Solar System. Check out the Astrobiology Hero poster of Alvin at: https://astrobiology.nasa.gov/resources/heroes/Image credit: NASA Astrobiology / Aaron Gronstal.

Up until 1977, scientists believed that all life on Earth was in some way dependent upon sunlight for energy. Organisms like plants utilize sunlight for energy, which is then transferred to other organisms like humans when the plants are eaten. The discovery of hydrothermal vents showed that life could thrive independent of the Sun. Suddenly, scientists had an Earthly example of how life might survive on ocean worlds in the outer Solar System, such as Jupiter’s moon Europa, or Saturn’s moon Enceladus. These moons are thought to harbor oceans of dark, liquid water beneath their icy surfaces. If hydrothermal vents are present, those oceans could be habitable for life as we know it.

Since the 1977 discovery, numerous hydrothermal vents (along with other unique seafloor environments) have been documented. From Hawaii to Japan to the Mediterranean Sea, areas with volcanic activity have been ‘hot spots’ for the identification of hydrothermal vents.

The discovery of hydrothermal vents features in Issue 4 of Astrobiology: The Story of Our Search for Life in the Universe, available at: https://astrobiology.nasa.gov/resources/graphic-histories/Image credit: NASA Astrobiology.

Hydrothermal vents are considered ‘extreme’ habitats for life for a number of reasons. Because some of the vent locations are deep below water, the pressure can be extremely high. When human divers swim to great depths, they must be extremely careful because high pressures can have life-threatening consequences. The organisms at hydrothermal depths must be adapted to withstand the physical stress of high pressures. Organisms that are able to do this are known as barophiles. Some barophilic microorganisms at vents have a waxy layer that helps protect them from crushing pressure.d 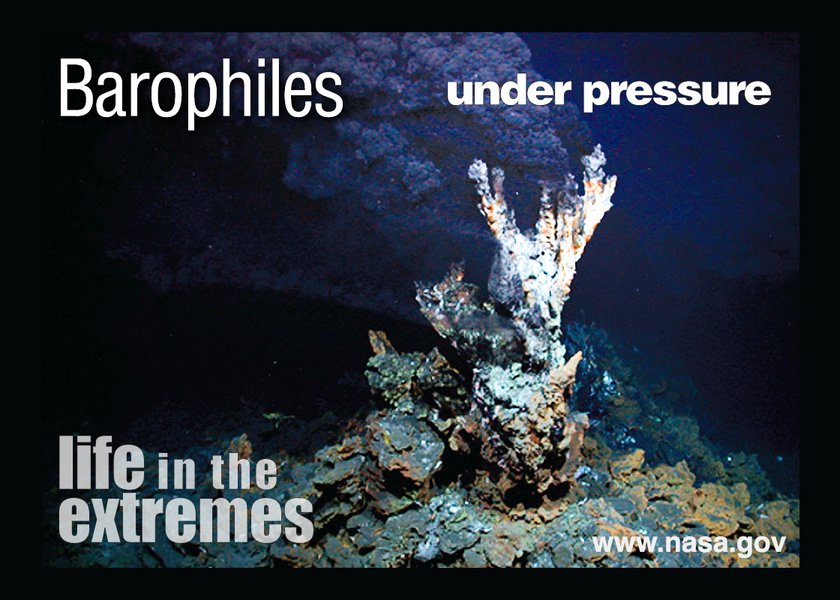 Barophiles can live in highly pressurized places such as the bottom of the ocean floor near hot vents. Whereas most living creatures cannot survive the extreme forces that exist below the Earth’s surface and on the sea floor, these microbes thrive under high pressure. Click the image to see more of Astrobiology Extremophile Trading Cards.Image credit: NASA Astrobiology.

The material spewing out of hydrothermal vents can also be extremely hot, creating niches for thermophilic microorganisms that can withstand the heat. There is a gradient between the hot fluid of the vents and the cold water that surrounds them, and along this temperature gradient is where you find heat-loving microorganisms that serve as the basis of the food chain in hydrothermal vent environments.

Some astrobiologists believe that hydrothermal vents in Earth’s early oceans could have been important in the origins and evolution of life on our planet. The unique environment of hydrothermal vents allows for some natural chemical reactions that can produce molecules that may have played a role in the formation of the first living cells on Earth. For instance, studies have identified minerals known as metal hydrides around alkaline hydrothermal vents. These minerals can act as catalysts for reactions that form small organic compounds. 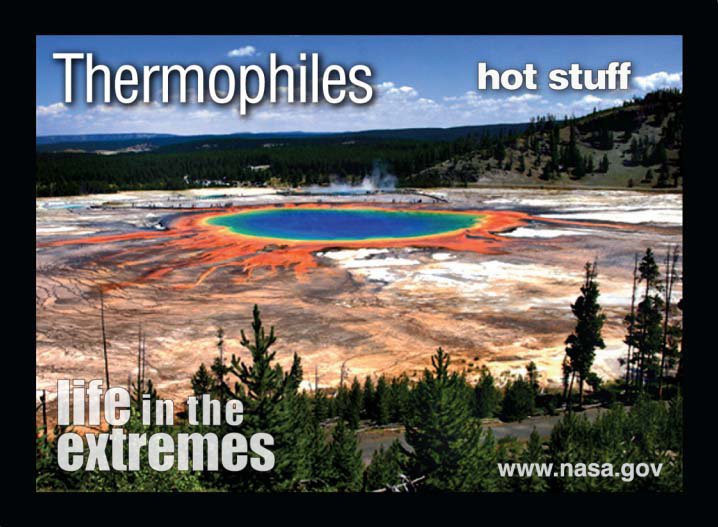 Thermophiles have developed special proteins that allow them to tolerate a broad range of temperatures – some even require temperatures around 140°F to exist at all. Click the image to see more of Astrobiology Extremophile Trading Cards.Image credit: NASA Astrobiology.

Some interesting places around the world where astrobiologists can find hydrothermal vents include:

The Mid Cayman Rise
The Mid-Cayman Spreading Center is a slow-spreading mid-ocean ridge and is found in the Carribean Sea. Hydrothermal vents are found in locations along the roughly 110 kilometer length of the ridge where two of Earth’s tectonic plates are moving apart.

The Gakkel Ridge
The Gakkel Ridge is another slow-spreading mid-ocean ridge which is formed between the North American Plate and the Eurasian Plate. This ridge sits in the Arctic Ocean, one of Earth’s least explored oceans. One location on the Gakkel Ridge is the Aurora vent field found north of Greenland. The Aurora Field is closer to Earth’s north pole than any other hydrothermal vent field documented so far.