Earth's Gakkel Ridge and the Exploration of Icy Worlds

Astrobiologists supported by NASA recently reported the results of an expedition to hydrothermal vents in the Arctic Ocean that could be an excellent analog for similar systems on icy worlds in our solar system. A new publication expands on reports from the unique research site, providing details about the ultra-slow spreading Gakkel Ridge in the Aurora Vent Field and how the site could shape future astrobiology research. This hydrothermal vent system is under permanent ice cover, and could be very useful in planning future missions to search for life on icy ocean worlds.

The Aurora Vent Field is the closest known hydrothermal system to Earth’s northern pole. Scientists first spotted visual evidence of ‘black smokers’ in 2014, but the source of the smoke-like, super-heated liquid wasn’t identified until years later. During an expedition in 2021, a team of multidisciplinary scientists sailed from the island of Svalbard to perform the first survey and sampling of this system using a remotely operated vehicle (ROV). Scientists piloted the Nereid Under Ice (NUI) submersible from the relative safety of a boat at the surface and gathered samples from a number of locations along the hydrothermal vents on the ocean floor. The recent paper includes a preliminary description of what those samples revealed, including the unique organisms that call the Gakkel Ridge home.

Importantly, the study also gives a detailed account of what it took to collect the first deep hydrothermal vent samples from under drifting ice with an ROV. This work provides a baseline for future robotic explorations of the deep Arctic, and could help mission planners identify considerations for future robotic missions to ice-covered ocean worlds like Europa and Enceladus.

Finally, the study describes lessons that can be learned from studying samples of arctic sea ice and how the ice cover affects the exchange of gasses between the atmosphere and ocean. Studying sea-ice processes on Earth may provide a useful analog for understanding surface chemistry on ice-covered ocean worlds in our solar system. The scale of ice thickness is much different on a world like Europa, but the fundamental processes by which material, including microbes, can become incorporated into sea-ice on Earth might help scientists develop instruments to search for materials on the surface of other icy worlds. 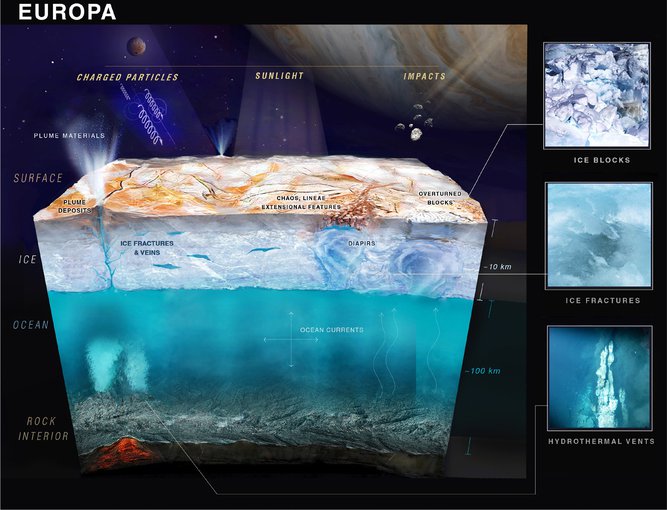 While the physical scale and thickness of the ice differs greatly between Earth’s sea ice and that of Europa’s ice shell, both icy environments serve as a window into the oceans hidden below. On Earth, we can study the ice, ocean, and seafloor to reveal any processes that provide connections across these interfaces. On Europa, we are, at least for the near future, limited to using the surface chemistry of the ice as our primary means for understanding the ocean and seafloor chemistry and geology.Image credit: NASA/JPL and the 2017 Europa Lander Science Definition Team Report (Hand et al., 2017).

The paper, “Hot Vents Beneath an Icy Ocean: The Aurora Vent Field, Gakkel Ridge, Revealed,” was published in the journal Oceanography. The work was supported in part by NASA Astrobiology through the Interdisciplinary Consortia for Astrobiology Research (ICAR) and Planetary Science and Technology from Analog Research (PSTAR), and performed by members of the Network for Ocean Worlds (NOW), a NASA Research Coordination Network.

A further publication, “Compositions of dissolved organic matter in the ice-covered waters above the Aurora hydrothermal vent system, Gakkel Ridge, Arctic Ocean,” in the journal Biogeosciences, includes additional details of findings from the expedition and includes work from members of NOW.