Superflares and the Habitability of Planets 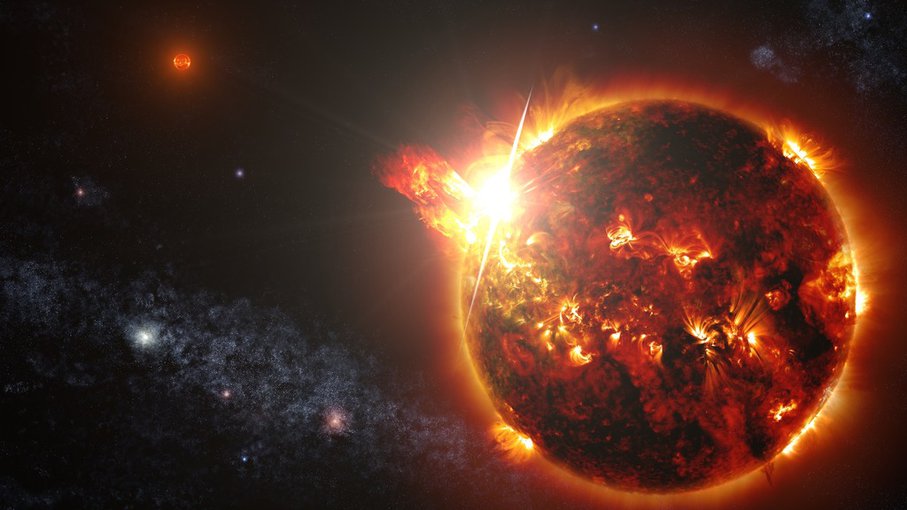 Artist illustration of a red dwarf star as it unleashes a series of powerful flares.Image credit: NASA/GSFC/S. Wiessinger.

Data from NASA’s Transiting Exoplanet Survey Satellite (TESS) is helping researchers understand how stellar flares can affect the habitability of planets. Flares occur when bursts of energy are released from stars, and they can vary greatly in magnitude. The recent study looks at extremely large events known as super flares, which can be 10 to 1000 times larger that any flares we see from the Sun.

The team of researchers utilized data from TESS to better understand how powerful ultraviolet radiation from super flares could affect the atmospheres and surface conditions of rocky planets in the habitable zone of M-dwarf stars. The results could help astrobiologists determine limits to habitability on exoplanets, and will aid in selecting targets of study for future missions like the James Webb Space Telescope (JWST).

The findings were published online ahead of print in the Astrophysical Journal.

A press release concerning the research is available from the University of North Carolina at:
https://uncnews.unc.edu/2020/10/07/new-research-explores-how-super-flares-affect-planets-habitability/

TESS launched aboard a SpaceX Falcon 9 rocket from Cape Canaveral Air Force Station on April 18, 2018. TESS completed its primary mission to survey 75% of the sky on July 4, 2020, and is now in its extended mission.

Related:
Superflares from a Solar-Type Star