A study on early animal mobility

Scientists have evaluated fossils from the Ediacara Member in South Australia to asses whether or not the early animals were capable of mobility. The ability to move was a key step in the evolution of complex life on Earth, providing organisms with a number of advantages over their non-motile counterparts. Movement allows animals to search for food, escape adverse conditions, and to exchange genetic material over large scales. Previously, trace fossils suggesting animal mobility have been found in rocks from the Ediacaran (635-539 million years ago). Evidence suggests that the White Sea assemblage (Ediacara biota from the White Sea in Russia) were able to move around in order to feed. 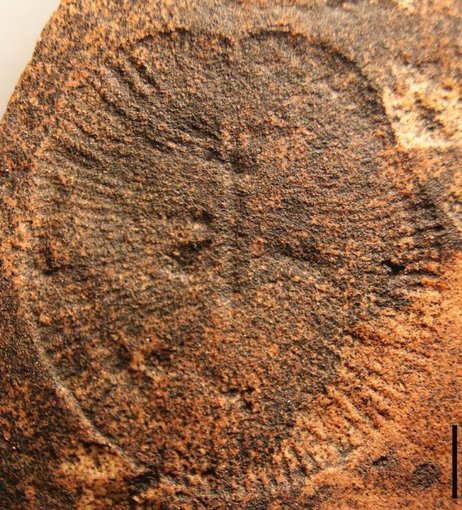 Dickinsonia is a genus of iconic fossils of the Ediacaran biota.Image credit: Jennifer Hoyal Cuthill.

The recent study focused on dickinsoniomorphs from South Australia, and demonstrates that organisms from this research site were also capable of mobility. Bilaterally symmetrical organisms likely moved using muscular peristalsis. This form of movement is used by earthworms today, where the worm constricts its anterior to increase its length. The tracks left behind by this movement left trace fossils in the rock, which provide evidence that a number of bilaterally symmetrical organisms on Earth were capable of mobility during the Ediacaran.

The study, “Slime travelers: Early evidence of animal mobility and feeding in an organic mat world,” was published in the journal Geobiology. The work was supported by NASA Astrobiology through the Exobiology Program.

Related Articles:
Ediacaran Scavenging as a Prelude to Predation
Pond Scum Explains Evolution of First Animals
Ocean Anoxia and the Decline of the Ediacara Biota