Microbial mats that existed on sea floors prior to the “Cambrian explosion” provided the foundation for early animal life to arise, new research looking at trace fossils of that early life has found.

When Charles Darwin wrote On the Origin of Species, and for decades thereafter, scientists ascribed the beginning of animal life to the Cambrian, eventually pinned to about 540 million years ago when trilobites and other multicellular organisms emerged in a relatively short timeframe. 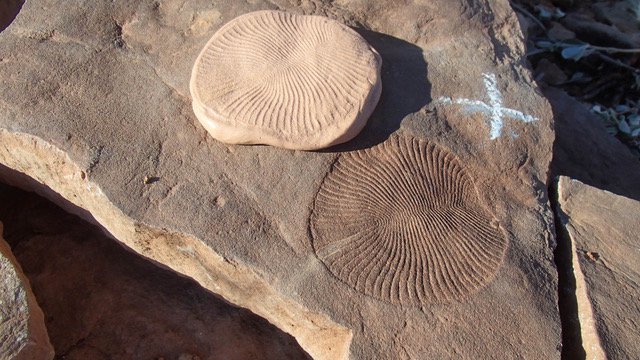 Dickinsonia costata, one of the most common species of the Ediacaran period, moved and fed on seafloor microbe mats. This specimen and its silly putty cast are about 6 centimeters across and from the Nilpena Station of South Australia.Image credit: Mary Droser.

In recent years, however, astonishing complexity has been discovered in the period right before the advent of the Cambrian explosion, revising the scientific view of the origins of the most complex, multicellular life on Earth.

“By the time we get to the Cambrian – which has much more familiar organisms – a lot of the evolution had already happened on Earth,” says paleobiologist Mary Droser at the NASA Astrobiology Institute at the University of California, Riverside.

Droser is the lead author of a recently published paper in the Annual Review of Earth and Planetary Sciences describing the conditions that led to the rise of the earliest animals in the late Ediacaran period (an era that lasted from 635 to 540 million years ago) of the Precambrian, and the stages of evolution that led to their domination. Classification has proven difficult for soft-bodied Ediacara biota, as their remains are encased in some of the oldest rocks on the planet. However, uniting attributes like multicellularity, bilateral body shapes and movement to find food have surfaced in recent years. Droser said it was time to compile and synthesize the published research on the topic.

Although scientists have widely credited the Ediacaran for harboring early animal life, researchers mainly focused on fossil impressions of individual specimens. Droser and her colleagues, James Gehling and Lidya Tarhan, took a different approach by examining microbial textures, evidence of mobility and species associations among fossil beds to gather clues about their ecology and evolution.

By studying how and why early animals settled or moved, scientists can get a glimpse into the lives of these long-gone animals and the adaptions they used to survive, including what kinds of surfaces they colonized and how they traveled and ate.

“One of the things that we look at is evidence of mobility, as opposed to the organism itself,” Droser said. 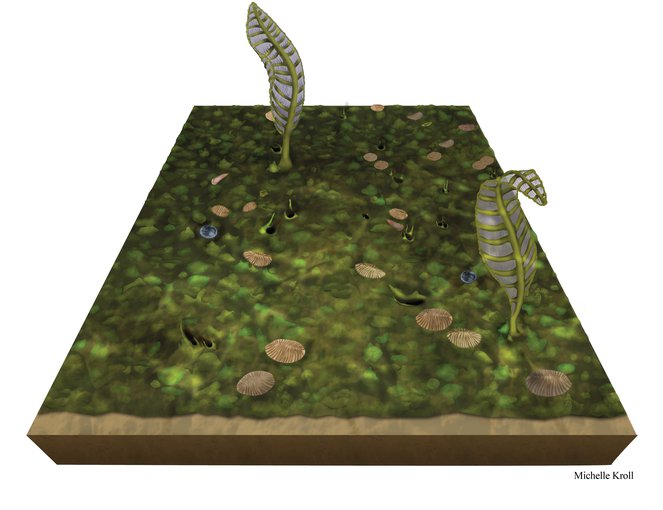 A trove of mobile information can be found about the Ediacaran in trace fossils, in the form of “footprints” left behind by the animals when they moved and interacted with the surrounding environment rather than their actual body parts.

“We’re not just looking at the beautiful fossils but everything that’s there,” Droser says. “It’s looking at the weird and unusual things that actually provide a lot of the insight.”

Root-like anchors that attached sea fan-like organisms to the substrate, scraping marks left by mollusk-like algae eaters, and mining burrows left by worm-like animals are all examples of the traces these extinct creatures left behind.

Before the ubiquity of predators, sediment mixers and decomposers, what accumulated on the seafloor was not only organic material that fell to the seafloor but also mucus-like layers of microbes coating the sandy bottom called microbial mats. “Think pond scum,” says Droser.

The range and diversity of microbial mats that served as the foothold for Ediacara biota would prove even more pivotal to the ecology of these ancient habitats. The mats offered an alternative path from the free-floating lifestyle of microscopic algae and bacteria as something for the new and enterprising species to attach to or feed from on a shifting seafloor. The stability and environmental complexity provided by the sticky mats made the extensive seafloor habitable.

The appearance, diversification, and evolution of Ediacara biota are inextricably linked to these mats. Researchers have found that with the rise of complex animals comes advancements in the microbial mats themselves, revealing the ecological interplay between the species, Droser says. 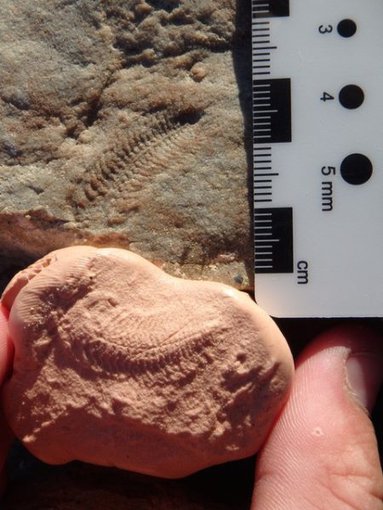 Sprigginia fossils are some of the most complex fossils found in the Ediacaran period. Vaguely resembling soft-bodied trilobites, Sprigginia has a head-like region and repeat-ing segments running the length of its body.Image credit: Mary Droser.

The Ediacaran, replete with explosive diversity, saw the first emergence of successful bilaterial animals that would later give rise to Earth’s first vertebrates, mobility, early mollusks, skeletons, plant-like reproduction and population struggles such as competition over resources and space, which are all vital components of modern animal ecosystems today.

“We would argue that the beginning of animal life as we know it begins in the Precambrian,” says Droser. “By the time that you get to the Cambrian, all of the major groups are established.”

Droser said studying the ecology and evolution before the Cambrian explosion offers key insights into how the early stages of the evolution of complex life may play out on other planets.

“It’s much cheaper and easier to go back in time on our own planet and ask,” Droser says, “‘How did the atmosphere and ocean chemistry interact with the nature of prokaryote, eukaryote and multicellular evolution to produce a planet with this complex green scum around it?”

The review was supported, in part, by NASA Astrobiology through the Exobiology & Evolutionary Biology Program.