Oceans Across the Solar System

The journal Oceanography has published a “Special Issue on Oceans Across the Solar System,” which includes contributions from a number of NASA-supported astrobiologists and members of the NASA Research Coordination Network (RCN), Network for Ocean Worlds (NOW). Oceanography is the official magazine of the Oceanographic Society.

The special issue covers topics ranging from Earth’s oceans to the subsurface oceans on icy moons such as Europa and Enceladus. Ocean science on Earth provides fundamental knowledge on how these bodies of water can become habitable for life as we know it, and whether or not environments for life could persist in the Solar System on worlds other than Earth.

The Special Issue on “Oceans Across the Solar System,” (2022) Oceanography, Volume 35, Number 1, can be found at: https://tos.org/oceanography/issue 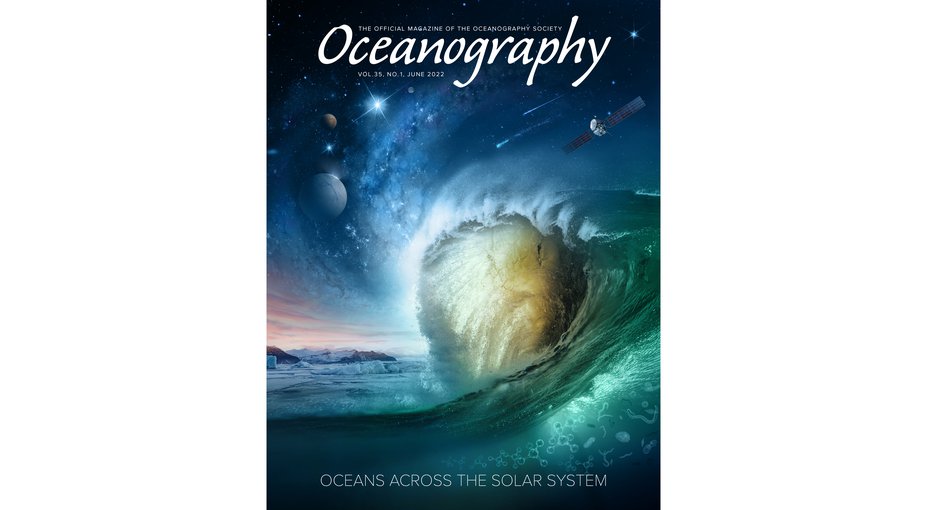 The cover of the Special Issue on Oceans Across the Solar System of the journal Oceanography (Volume 35, Number 1, June 2022). The cover features an artistic rendering of ocean worlds by Jenny Mottar.Image credit: Oceanography/Illustration by Jenny Mottar, NASA.

Ocean Worlds are a focus of research concerning the potential for past or present life in the Solar System, and are some of the main locations of interest for upcoming NASA missions. Jupiter’s moon Europa is covered in an icy shell, but when NASA’s two Voyager spacecraft flew past in 1979, data from the mission gave scientists on Earth the first hint that Europa was hiding an ocean of liquid water beneath its surface. In 1989, the Space Shuttle Atlantis lifted NASA’s Galileo mission off of the Earth. Galileo went on to explore the Jovian system and provided further evidence for a subsurface ocean on Europa. Galileo’s closes approach to Europa came in 2000, when the spacecraft passed within 351 kilometers of the moon’s surface.

Recently, NASA’s Juno mission provided the first close-up view of Europa since Galileo. While studying the planet Jupiter, Juno is also providing astrobiologists with data about Europa’s geology. This data will help in the design of future missions. Currently, NASA’s Europa Clipper is set to launch in 2024 and will study the moon’s atmosphere, surface, and interior.

Other worlds in the Solar System, such as Saturn’s largest moon Titan and sixth-largest moon Enceladus, could also have reservoirs of liquid water beneath their frozen surfaces. In 2005, NASA’s Cassini spacecraft spotted icy water particles and gas erupting from Enceladus’ surface, and that could originate from a subsurface ocean. The eruptions generate an enormous halo of fine ice dust around Enceladus, which supplies material to Saturn’s E-ring.

A selection of additional publications from the Network for Ocean Worlds can be found on the Publications page of the NASA Astrobiology Program website.