About Image
Yellowknife Bay on Mars, where the rover Curiosity first found conditions that were habitable to life. The rover subsequently found many more habitable spots, but no existing or fossil life so far. Credit: NASANASA
This false color photo of water geysers spouting from Saturn’s moon Enceladus was taken by NASA’s Cassini. The geysers establish that there is a subsurface ocean beneath the icy crust of the moon.Cassini Imaging Team, SSI, JPL, ESA, NASA
Dec. 16, 2019
Feature Story

How Long Were the Wet Periods on Early Mars, and Was That Water Chemically Suitable For Life?

There is no doubt that early Mars had long period of warmer and much wetter climates before its atmosphere thinned too much to retain that liquid H20 on the surface.

As we know from the Curiosity mission to Gale Crater and other orbital findings, regions of that warmer and wetter Mars had flowing water and lakes periodically over hundreds of millions of years. That’s one of the great findings of planetary science of our times.

But before approaching the question of whether that water could have supported life, a lot more needs to be known than that water was present. We need answers to questions like how acidic or basic that water likely was? Was it very salty? Did it have mineral and elemental contents that could provide energy to support any potential life?

And most especially, how long did those wet periods last, and the dry periods as well? 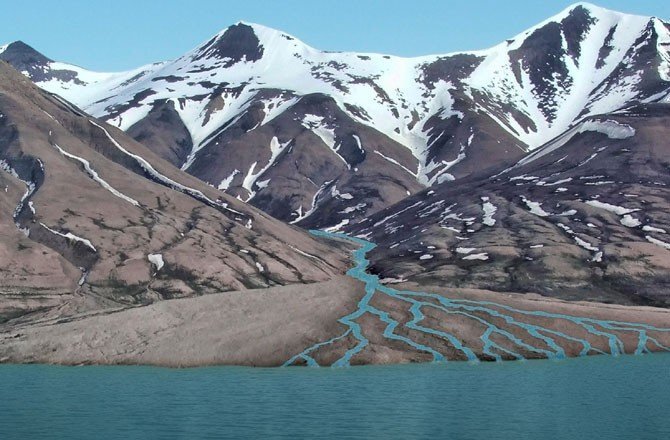 An artist illustration, based on scientific findings, of Gale Crater in Mars during one of its ancient, wet periods.Image credit: NASA.

In a recent paper for Nature Communications, some more precise answers are put forward based on data collected at Gale Crater and interpreted based on geochemical modeling and Earth-based environmental science.

The water, say geochemist Yasuhito Sekine of the Earth-Life Science Institute (ELSI) in Tokyo and colleagues from the U.S. and Japan, had many important characteristics supportive of life. It was only mildly salty, it had a near-neutral pH, it contained essential minerals and elements in state of disequilibrium — meaning that they could give and receive the electrons needed to provide life-supporting energy. The area was hardly lush — more like the semi-arid regions of Central Asia and Utah’s Great Salt Lake — but it contained water that was plausibly life supporting.

Based on an analysis of the patterns and quantities of salt remains, they estimate the water was present numerous times for between 10,000 to one million years each period.

Were those warm eras long enough for life to emerge, and the dry period short enough for it to survive?

“We don’t have a clear answer,” Sekine said. “But it is now more clear that the key question is which is more important: the chemistry of the water or the duration of its presence?”

And the way to address the question, he said, is through a mix of planetary science and environmental science.

“This is a first step in the application of environmental chemistry to Mars,” Sekine said. “It’s really a new research field, Mars environmental science.” 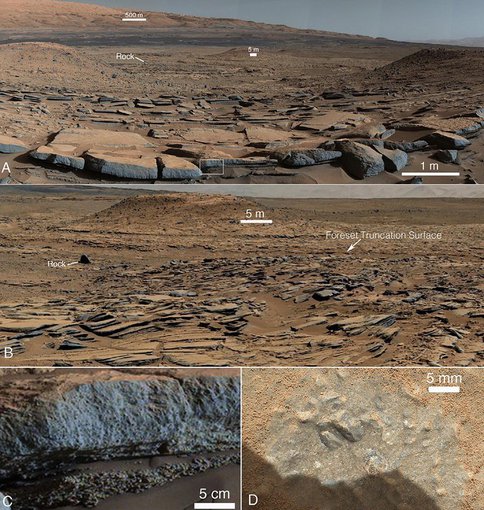 Images from the Curiosity rover from Gale Crater that demonstrate the past presence of significant amounts of water.Image credit: NASA/JPL-Caltech/ John Grotzinger.

To have long-lasting lakes and rivers on Mars, there has to be a water cycle to keep them refreshed. Mars had later “catastrophic” water eruptions that created deep canyons, but researchers say those were likely the result of subsurface ice melting from asteroid impacts or volcanoes or other singular events.

But the presence of an on-going water cycle is a much bigger deal and has more profound implications for understanding Mars and its potential to host life.

One school of thought has been that Mars once had a large ocean over much of its northern hemisphere, and that would be a primary source for the on-going water cycle.

Sekine says that their research points to something significantly more limited: localized systems where snow and ice would collect in the southern highlands of Mars and then would melt when the area warmed, flow downward and collect into lakes.

The question of how Mars could have been warm enough to have flowing water in this early period is a controversial one without a clear consensus.

Sekine et al propose a scenario where the warmth is produced by subsurface releases of methane and hydrogen — both greenhouse gases. The compounds would be contained in methane clathrate — in which a large amount of methane is trapped within a crystal structure of water — forming a solid similar to ice.

Subsurface water ice would also liquefy during warm periods and rise to add to the growing crater lakes.

Sekine said their models shows that this warming likely occurred “10s of times.” 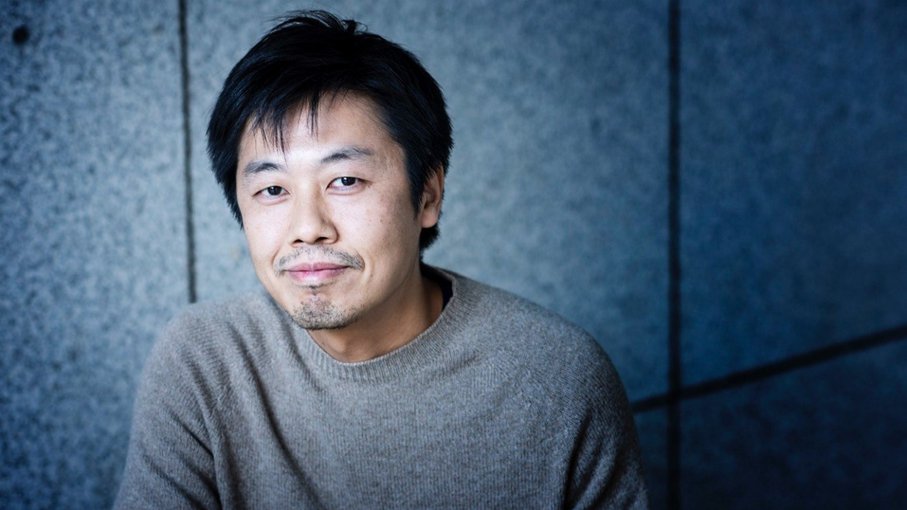 The estimates of how long the lake remained wet are based on analysis of, among other data, the salt accumulations detected by Curiosity, as well as by climate models by collaborator Robin Wordsworth, Associate Professor of Environmental Science and Engineering at Harvard University.

“Our estimates come from the salinity of the lake,” Wordsworth said. “Once we have that number, we can make assumptions based what is left behind when water flows through the rocks. The water coming in is fresh water and the salinity grows in the lake.”

While the wet periods were found to have lasted for tens of thousands to a million years, the dry periods would have been far longer. They are the result of evaporation that is not replenished by new runoff or subsurface water when the planet has become colder.

The long periods of dryness might seem to be foreclose any chance of life emerging, but a robust school of origins of life school now holds that wet and then dry cycles are actually what is needed for that biological emergence. This is because some essential components of a proto-cell need wet conditions to form while others need it to be dry.

Yellowknife Bay in Gale Crater, as photographed by the Curiosity rover on Mars. The data used in Sekine’s paper on Mars water came from holes drillied in this area.Image credit: NASA/JPL-Caltech/MSSS.

Sekine said that their paper provides the first broad quantitative review of the water chemistry of Gale Crater’s ancient lake — a full set of pH, redox, salinity, and dissolved species’ concentrations. While scientists on the Curiosity team made some early assessments of the chemical make-up of that water, Sekine said more needed to be done.

Remarkably, one of their methodologies to reconstruct that water chemistry from clay sediments is based on one developed in the field of radioactive waste disposal — quite a novel approach for Mars research.

Keisuke Fukushi, an associate professor at the University of Kanazawa and a co-author of the Nature paper, introduced the idea to the team.

The background, he said, is that some nations are considering longterm disposal of nuclear waste in clay-rich rocks, which are seen as an environment in which the radioactive atoms can be contained. In order to predict the future migration of the radioactive material in that setting, it will be essential to understand the chemistry in the water between grains of sediment those clay-rich rocks.

Researcher Eric Gaucher of the French Geological Survey has developed methodology to quantitatively predict that water chemistry from the composition of smectite, which is the main constituent of many clay rocks.

“This approach,” Fukushi wrote in an email, “can construct the full water table from the mineralogical information of clay-rich rock.”

Since that mineral information is available from Yellowknife Bay on Mars, Fukushi understood that the Gaucher approach could be useful to reconstruct the past water chemistry in Gale.

And it was very useful, Sekine said. 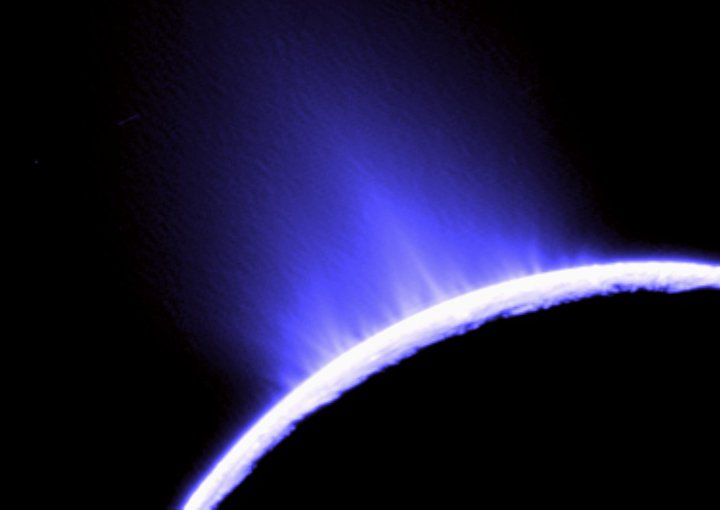 This false color photo of water geysers spouting from Saturn’s moon Enceladus was taken by NASA’s Cassini. The geysers establish that there is a subsurface ocean beneath the icy crust of the moon.Image credit: Cassini Imaging Team, SSI, JPL, ESA, NASA.

This Mars research was done as part of a Japanese government Aqua Planetology project (Grant-in-Aid for Scientific Research on Innovative Areas). Sekine is the principal investigator for a $943,000, five-year Aqua Planetology grant, which aims to create an innovative research field through a fusion of and/or as a application of existing researches

In addition to his Mars work, Sekine is involved with aqua planetology projects looking at ice-covered water worlds such as Jupiter’s moon Europa and Saturn’s moon Enceladus, as well as the theorized ocean beneath the surface of the former planet Pluto and ubiquitous ice on asteroids beyond our solar system’s “snow line “. In addition, he is part of the European Space Agency’s Jupiter Icy Moon Explorer (JUICE) team to the Jupiter system, which will focus on Ganymede — the largest moon orbiting Jupiter, the only moon with a magnetic field and a moon many scientists suspect has a subsurface ocean — and Europa.

“We need to know, and are working to learn, the distribution of water in solar the system,” Sekine said “From Hayabusa2 (a Japanese Aerospace Exploration Agency mission) and OSIRIS-REx (led by NASA,) we hope to learn how much water is in present in the minerals of the asteroids. This will help us understand where the water on Earth and early Mars and elsewhere might have come from, and how it got delivered.”

Both of those asteroid missions are designed to return samples to Earth. Scientists are eager to study the quantity of water in the asteroids as well as the isotopic variety of water, which will help unravel those big question of where planetary water in our solar system came from.

As a specialist in ice-rock interactions, Sekine has also done substantial field work in places like Mongolia, Central Asia and Utah to study the microbiology present, especially in areas of permafrost or past permafrost.

That work forms a base for his planetary science, and now for Mars environmental science as well. Environmental science is a broadly interdisciplinary field that integrates physical, biological and information sciences (including ecology, biology, physics, chemistry, plant science, zoology, mineralogy, oceanography, limnology, soil science, geology and physical geography) to study the processes, cycles, and broad systems at work in the environment.

The field grew up in the 1960s and 1970s with the imperative to find solutions to human pollution and unsustainable practices. But now its techniques and approaches are turning out to be useful in understanding worlds beyond Earth as well.

(This column was based on reporting for an article that ran on the website of the Earth-Life Science Institute (ELSI) in Japan.)