About Image
Some of the researchers, collaborators and staff at ELSI during a workshop last year.Nerissa Escanlar
May 9, 2017
Feature Story

Research Center a Hub for Origins of Life Studies

Research into the origin of life on Earth is notoriously difficult. The field has produced many new insights into how specific chemical building blocks form and the way an organism’s basic architecture is constructed.

But putting together some of the pieces of the puzzle has not led to any breakthrough moment when the process could be described as understood. As a sign of how far away that moment is likely to be, there isn’t even any real consensus view on how to define life.

Despite this sobering reality — or perhaps because of it — a new center for the study of early Earth and the origin of life was formed several years ago with the goal of approaching the issue in new ways.

The sponsor of this substantial effort is the government of Japan and its World Premier International Research Center Initiative (WPI.) In late 2012, the government committed $100 million over 10 years to build and fund an institute that would not only tackle the fundamental questions of life, but would approach it in a way intentionally divergent from how science is conducted in Japan. 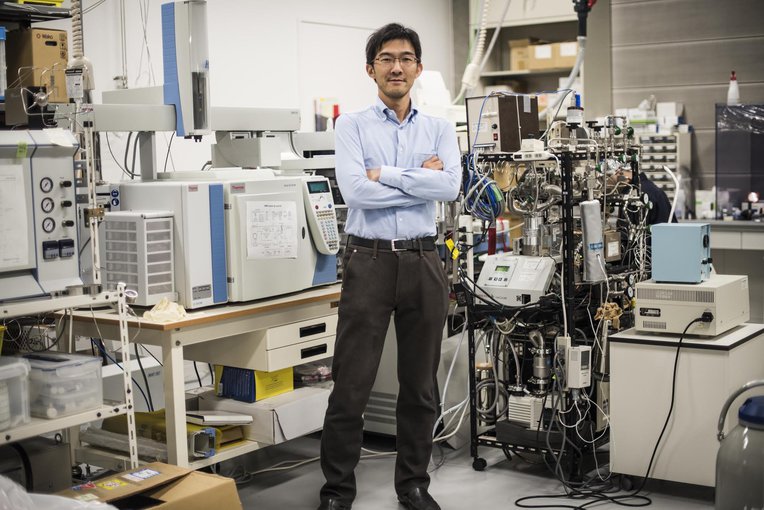 Biogeochemist Yuichiro Ueno in his lab at ELSI built the instrument (to his right) to further his research.Image credit: Nerissa Escanlar.

The institute would recruit and hire dozens of researchers from Japan and abroad (the most interest has come from American, French and British researchers) representing a broad range of disciplines, and would make English the common language of all the institute’s endeavors.

Kei Hirose is the director of ELSI and an expert in the field of deep Earth dynamics and materials with some important discoveries to his name. The overall focus of the institute, he said, is the early Earth’s transition from geochemistry to biochemistry, or from a world of rock and atmosphere and water to one that included biology.

“We strongly hold that progress in understanding the origin of life requires close collaboration between geoscientists and bioscientists,” he said. “There are lots of scenarios about how life might have emerged — the RNA world, metabolism first, hydrothermal vents — but for us they have to link life and the environment to be at all persuasive.” 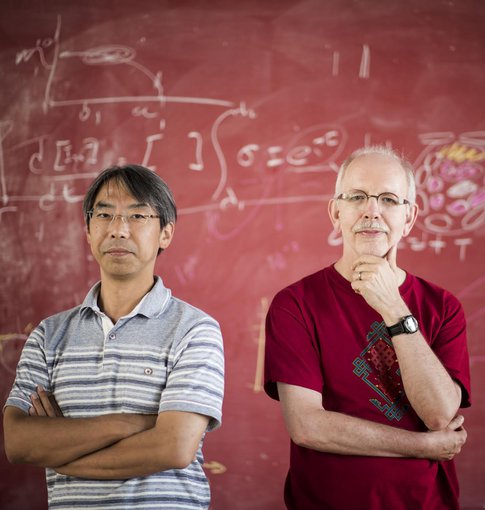 The heart of an origins of life institute is inevitably in its labs, but ELSI also has its “Agora,” named after the central gathering place in early Greek city-states. A large, clean-lined hall with comfortable chairs, chalkboards covering many walls and engaged scientists often grouped around them, it is where the unscripted but invaluable seeds of collaboration are often sown. The phrase “let’s meet at the Agora” is often heard at ELSI.

Piet Hut, a computational astrophysicist and head of the interdisciplinary program at Princeton University’s Institute for Advanced Studies (IAS) was one of the early creators of the ELSI approach and culture. In return for an unusual degree of freedom and support, Hut said, the full-time ELSI scientists were informally asked to honor an unusual request.

“All I asked them to do was for everyone to come to tea for at least fifteen minutes, from 3 pm to 3:15, every day.”

His expectation is for the researchers to approach their work as a shared venture, whereby talking and working with colleagues outside their disciplines becomes a regular part of life. Hut is of the view that questions surrounding the origin of life can be successfully tackled only by scientists who are immersed in them.

It isn’t easy to start an institute from scratch, and harder still to do it in a cross-cultural, inter-disciplinary way. Attempting this approach in a country where science traditionally comes with a strict hierarchy, and deep but narrow focus on subjects means taking on even more. After some inevitable fits and starts the institute as a whole has coalesced generally, but by no means exclusively, around a handful of themes.

ELSI is perhaps best known for its work on the “magma ocean” that covered the still-growing Earth in the late accretion phase, a phase of planetary formation thought to occur on many, or perhaps most, just-formed terrestrial planets and moons.

John Hernlund, an ELSI vice director and a specialist in planetary formation and evolution, said the vast molten rock stew — exceeding temperatures of 2000o F or more and in places possibly as deep as 700 miles — was the kitchen in which all the Earth’s elements and compounds boiled, transformed, bonded and became the material from which all else formed.

More than 20 ELSI researchers regularly study magma ocean dynamics and its role in the evolution of the planet from fiery ball to life’s host, Hernlund said, though some would not yet see their particular speciality as connected to that larger whole. Among the results from the group: models showing that the largely smooth surface of Venus may well be the result of the presence of a 3.5 billion year magma ocean that couldn’t cool down because of all the greenhouse gases in the atmosphere. 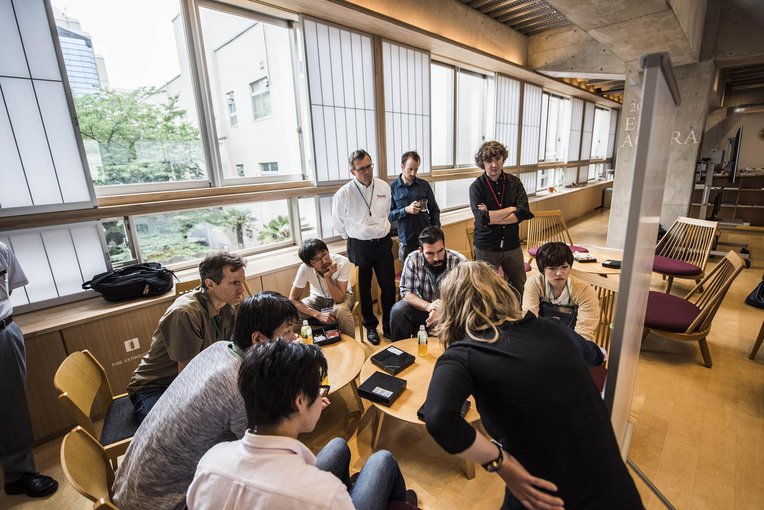 A diverse group of scientists is also pioneering a “messy chemistry” approach to how life might have started. It focuses on the complex tars of early Earth, which have generally been ignored in favor of looking at “cleaner” pathways to explain the emergence of specific building blocks of life. The diversity of life on Earth suggests origins equally as complex, says ELSI chemist Irena Mamajanov, and the “messy chemistry” group is working on how those ungainly macromolecules could straighten into the the building blocks of life.

Additionally, ELSI wants to be a center of efforts to explore the evolutionary pathways of molecules central to biology, and to do it in terms of “paleo-biology.” Several ELSI researchers and outside scientists associated with the institute are pioneering the field as another approach to the origin of life.

ELSI research scientist Masafumi Kameya, for instance, has been studying microbial metabolisms and has undertaken a difficult and painstaking characterization of the enzymes of ancient and universal pathways. Betul Kacar, a organismic and evolutionary biologist at Harvard University and ELSI, trained in resurrecting ancient molecules and is now exploring how her techniques can be adapted to learn about metabolic pathways with ties to the geochemical record. And ELSI’s Shawn McGlynn, a biogeochemist, has studied the molecules that link early sulfur metabolic processes to the flow of energy in living organism.

Earlier this year, the National Science Foundation selected a group including Kacar, McGlynn and ELSI physical chemist Chris Butch (the latter two also associated with the Blue Marble Space Institute) for a grant to study the role of ancient intermediary compounds called thioesters, which are central to the essential-for-life process of transforming inorganic carbon into organic carbon.

As ELSI principal investigator Eric Smith put it: “So either in- house or in our network, we are studying the three most fundamental innovations in carbon fixation, from a molecular systems evolutionary biology perspective.” He said the somewhat disparate group of researchers “found that they were traveling companions, and that ELSI was eager to be a natural home for the community they would form.”

Another emphasis is on adapting some of the insights of the alternative life field to better understand “emergence” in the context of life, complexity and cognition, among other areas of study. ELSI artificial life researcher Nathaniel Virgo, for instance, is using alternative life approaches to test the hypothesis that pre-biotic (i.e. non-living) materials can “evolve” through a kind of natural selection into materials more useful to life.

Some of the researchers, collaborators and staff at ELSI during a workshop last year.Image credit: Nerissa Escanlar.

In the few early years of its existence, director Hirose said ELSI researchers came primarily from Japanese institutions because organizers had limited knowledge and experience in recruiting from abroad. ELSI, he said, had a quite Japanese feel, which was definitely contrary to the goal of creating “a premier international research center,” as outlined by the Japanese government in its initiative.

“By today a transition has happened,” Hirose said. “When our non-Japanese scientists exceeded 20 percent of the total, then they stopped accommodating to Japanese ways and returned to their international ways. And that’s what we have wanted.”

Of the 63 researchers directly at ELSI now, almost half are from abroad. And as a sign of the Institute’s ambitions, it is a prime sponsor of the upcoming Astrobiology Science Conference (Abscicon) in Mesa, Arizona, one of the largest and best attended gatherings in the field.

ELSI is additionally unique in its creation of the ELSI Origins Network (EON,) a program funded by the John Templeton Foundation that brings postdocs from around the world to Tokyo. As part of the effort to spread and encourage origins of life research, EON requires that each of the postdocs split their two year appointment between ELSI and their home institutions.

The goal is to attract self-starting young scientists willing to travel and try something new; people schooled in a particular discipline but intrigued by how their knowledge can help the broader effort shed light on the origin of life and formation of Earth.

Donato Giovannelli, a native of Italy and researcher at Rutgers University, is one of the current 10 EON postdoctoral researchers. He’s an expert on extremophiles and marine biology, and is particularly drawn to understanding what extremophile genomes can reveal about relatively new adaptations from ancient ones. He looks back to the time when an organism survived in extreme conditions using just one electron receptor.

“I am very interested in what extremophiles can tell us about the origin of life, and I think it’s quite a bit,” he said. That has led to work at ELSI with artificial life specialists as well as computer modelers, and is part of the molecular paleontology study area the institute is building up.

Japan has a long history of being alternately tightly closed to the outside world and then eager for reinvigoration from abroad. In the case of ELSI, and several other related institutes, the goal seems to go well beyond catching up to the outside to becoming a visionary and inherently risk-taking pioneer. And if this approach succeeds at ELSI, the origins of life field could be in for some most intriguing surprises.