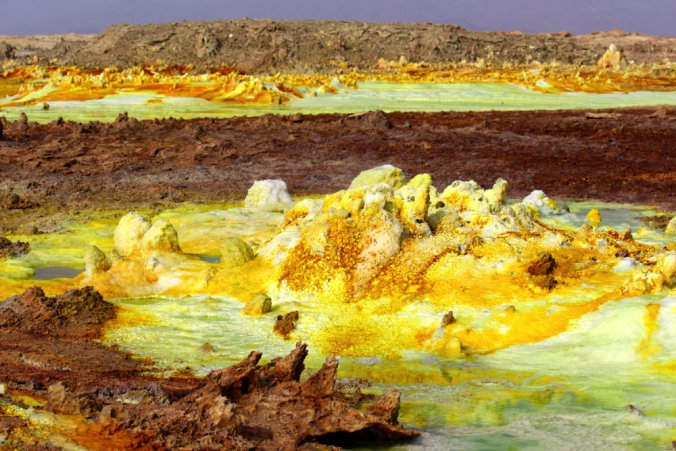 Ethiopia’s Dallol volcano and hot springs have created an environment about as hostile to life as can be imagined.

Temperatures in the supersaturated water reach more than 200 degrees F (94 C) and are reported to approach pure acidity, with an extraordinarily low pH of 0.25. The environment is also highly salty, with salt chimneys common.

Yet researchers have just reported finding ultra-small bacteria living in one of the acidic, super-hot salt chimneys. The bacteria are tiny — up to 20 times smaller than the average bacteria — but they are alive and in their own way thriving.

In the world of extremophiles, these nanohaloarchaeles order bacteria are certainly on the very edge of comprehension. But much the same can be said of organisms that can withstand massive doses of radiation, that survive deep below the Earth’s surface with no hint of life support from the sun and its creations, that keep alive deep in glacier ice and even floating high in the atmosphere. And as we know, spacecraft have to be well sterilized because bacteria (in hibernation) aboard can survive the trip to the moon or Mars.

Not life it is generally understood. But the myriad extremophiles found around the globe in recent decades have brought home the reality that we really don’t know where and how life can survive; indeed, these extremophiles often need their conditions to be super-severe to succeed.

And that’s what makes them so important for the search for life beyond Earth. They are proof of concept that some life may well need planetary and atmospheric conditions that would have been considered utterly uninhabitable not long ago. 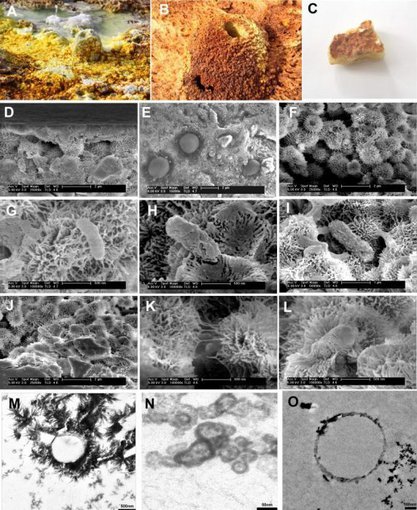 The unusual and extreme life and geochemistry of Dallol has been studied by a team led by Felipe Gómez from Astrobiology Center in Spain.

The samples were collected during a field trip to the Dallol volcano and the Danakil Depression in northern Ethiopia in January 2017, which was funded by the Europlanet 2020 Research Infrastructure (RI). The results were published this week in the journal, Scientific Reports.

The area is consistently one of the hottest in the world, both because of its near-equatorial location, the Dallol volcano and hot springs, and that much of it is below sea level.

The team collected samples of the thin layers of salt deposits from the wall of a yellow chimney stack and a bluish pool of water surrounding the outcrop (above.)

The samples were brought in sterile, sealed vials to state-of-the-art facilities in Spain, where they were analyzed using a range of techniques, including electron microscopy, chemical analysis and DNA sequencing.

The team identified tiny, spherical structures within the salt samples that had a high carbon content, demonstrating an unambiguously biological origin. 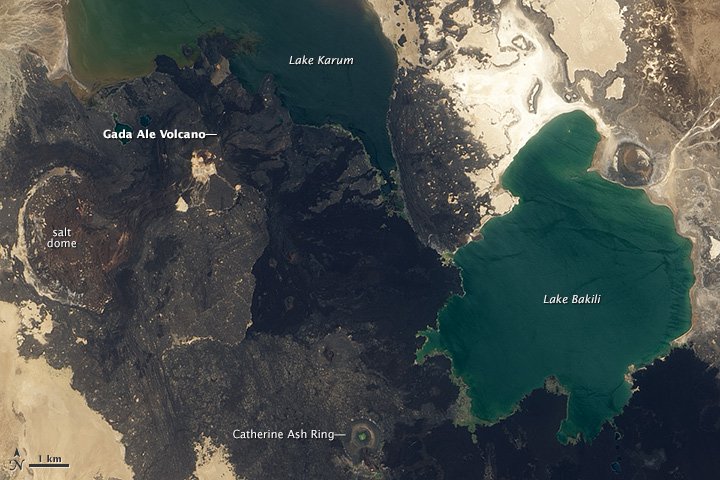 “This is an exotic, multi-extreme environment, with organisms that need to love high temperature, high salt content and very low pH in order to survive,” Gómez said. And love it they do, raising the most interesting question of whether they adapted to the conditions or emerged from them.

Just last month, the same international team published a review in the journal Astrobiology describing the close parallels between the Dallol area and the hydrothermal environments found on Mars — including the Gusev Crater, where NASA’s Spirit Mars Exploration Rover landed in .

As is the norm in the effort to understand life in extreme conditions and astrobiology generally, they focused on the geology and geochemistry of the site that gave rise to the extreme life.

“The physical and compositional features of the Dallol deposits, their mineralogies, sedimentary and alteration features, and their location in a region of basaltic volcanism of planetary-scale importance, are testament to the novelty of this extreme environment and its ability to host life-forms and to preserve biosignatures,” they wrote.

“It is therefore also a reliable analog to ancient martian environments and habitats. Deep investigation of the characteristics of this unique geological site will improve our understanding of the limits of life on Earth and inform the search for life on Mars.”

A view from the “Kimberley” formation of Gale Crater on Mars taken by NASA’s Curiosity rover. The mission has confirmed the long-ago presence of large amounts of water on the planet, as well as organic compounds needed for life. Curiosity was not equipped to be a life detection mission, but the follow-up Mars 2020 rover mission will be. The colors are adjusted so that rocks look approximately as they would if they were on Earth, to help geologists interpret the rocks. day, or sol, of the mission. (NASA/JPL-Caltech/MSSS)Image credit: NASA/JPL-Caltech/MSSS.

While this summation is surely accurate, it is also true that findings like these tell a larger story that goes well beyond Mars. Because the discovery of such a vast number and variety of extremophiles on Earth is one of the key factors that has led many space scientists and astrobiologists to conclude that life beyond Earth is likely.

If life can survive such unusual and extreme conditions on Earth, logic says that this flexibility would no doubt be present on other potentially habitable planets and moons.

Other major factors pointing to the plausibility of life beyond Earth are now broadly accepted:

None of this means any particular planet will support life since there are many other factors at play, such as how circular or elliptical the planet’s orbit might be, as well as the presence and composition of an atmosphere and a protective magnetic field. But our increasingly better understanding of exoplanets, solar systems and extreme life has brought legions of scientists into that hunt for extraterrestrial life — and they have found many ways to move forward as well as to avoid errors. 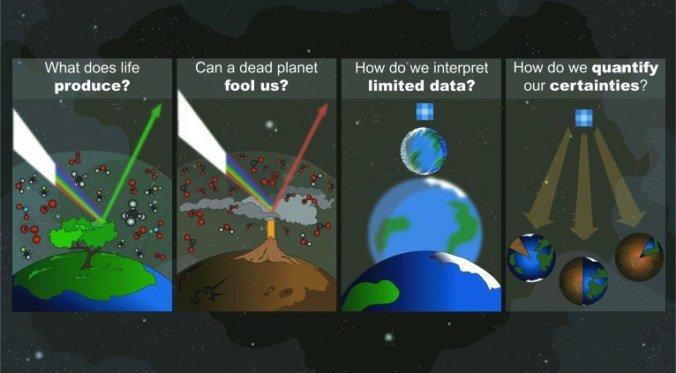 An overview of the past, present, and future of research on remotely detectable biosignatures from an Astrobiology journal paper by NASA NExSS participants.Image credit: Aaron Gronstal.

While the Dallol discoveries (and others like them) are encouraging, they are sobering as well. Finding these creatures here on Earth has been very difficult, so imagine how challenging it will be to detect the presence of comparable microbial life on now desiccated Mars or a distant planet.

Indeed, it would be impossible because their small numbers and limited metabolism don’t provide enough of a chemical biosignature to be detected even by telescopes and spectrographs a million times more powerful than what we have now. In terms of exoplanets, what is needed is a planet where plentiful life is providing a strong global biosignature of some kind.

That ups the ante quite a bit in the search for life beyond Earth. But there are a vast multitude of planets out there, and a logic to the possibility that some have enough life on them for us to some day detect it.