About Image
An artist's illustration shows that the stars in the TOI 1338 system make an eclipsing binary — they circle each other in our plane of view. If you could hover near the planet TOI 1338 b, you would see an eclipse every 15 days.NASA's Goddard Space Flight Center/Chris Smith (USRA)
Illustration of the Transiting Exoplanet Survey Satellite (TESS) in front of a lava planet orbiting its host star. TESS will identify thousands of potential new planets for further study and observation.NASA/GSFC
Jan. 15, 2020
Feature Story

When the the first Star Wars movie came out in 1977, it featured the now-iconic two-sun, “circumbinary” planet Tatooine. At that time astronomers didn’t really know if such solar systems existed, with more than one sun and at least one planet.

But since then, the presence and distribution of circumbinaries has grown to a dozen and some the planets discovered orbiting the two stars have been smaller. The most recent discovery was announced this week and was made using the Transiting Exoplanet Survey Satellite (TESS) space telescope

The new planet, called TOI (TESS Object of Interest)-1338 b, is about 6.9 times larger than Earth. It orbits its pair of host stars every 95 days, while the stars themselves orbit each other in 15 days.

As is common with binary stars, one is more massive and much brighter than the other (5976 K and 3657 K, respectively, with our sun at 5780 K), and as the planet orbits around it blocks some of the light from the brighter star.

This transit allows astronomers to measure the size of the planet. The transit — as scientific luck, or skill, would have it — was first found in the TESS data by a high school student working at NASA with over the summer, Wolf Cukier 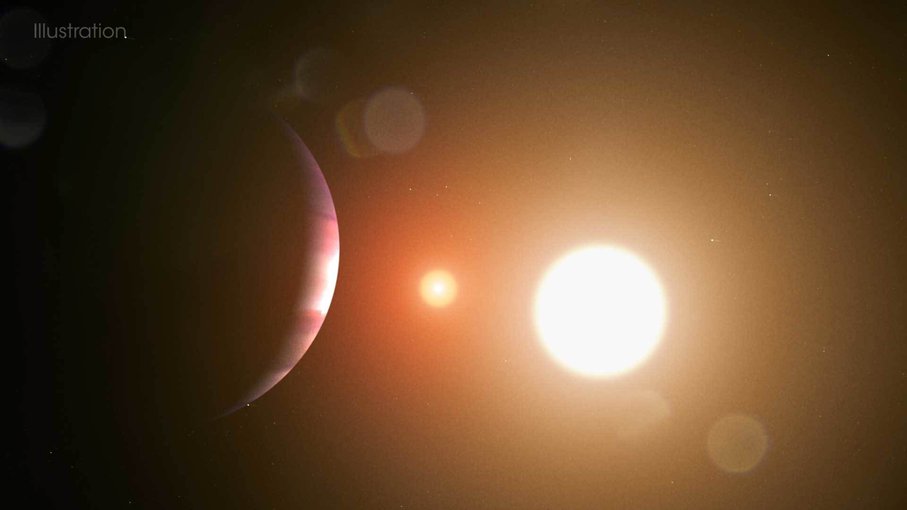 “I was looking through the data for everything the volunteers had flagged as an eclipsing binary, a system where two stars circle around each other and from our view eclipse each other every orbit,” Cukier said. “About three days into my internship, I saw a signal from a system called TOI 1338.”

“At first I thought it was a stellar eclipse, but the timing was wrong. It turned out to be a planet.”

With all of the data available from observations past and current, planet hunting clearly isn’t the scientific Wild West that it used to be — although the results remain often eye-popping and surprising.

Although this most recent circumbinary finding features a planet much smaller than the first one discovered, it is probably gaseous and definitely not habitable, Cukier and his colleagues wrote. (They also presented their findings last week at the American Astronomical Union meeting in Hawaii.) 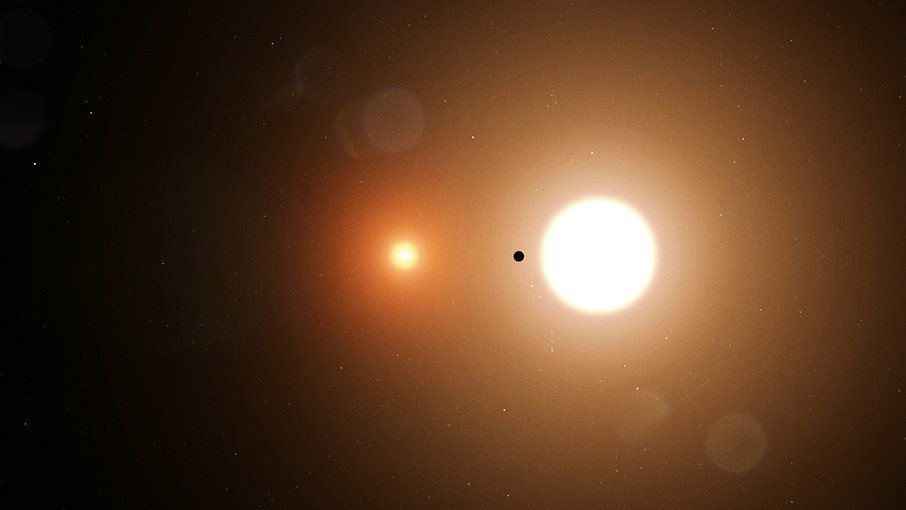 In this illustration, TOI 1338 b is silhouetted by its host stars. TESS only detects transits from the larger star.Image credit: NASA's Goddard Space Flight Center/Chris Smith.

But this doesn’t mean other planets orbiting two suns cannot be habitable.

In 2017, a study in the journal Nature Communications concluded that a planet in a cirmumbinary system could have a habitable planet if it was the right distance from the two stars. It could even be a planet that would remain potentially habitable and wet for a long time.

It turns out, such a planet could be quite hospitable if located at the right distance from its two stars, and wouldn’t necessarily even have deserts. In a particular range of distances from two sun-like host stars, an Earth-like planet covered in water would remain habitable and retain its water for a long time, according to the study.

Max Popp, then an associate research scholar at Princeton University and Siegfried Eggl, a Caltech postdoctoral scholar at NASA’s Jet Propulsion Laboratory, created a model for a planet in the Kepler 35A and B binary star system.

In reality, the stellar pair Kepler 35A and B host a planet called Kepler 35b, a giant planet about eight times the size of Earth, with an orbit of 131.5 Earth days. For their study, researchers disregarded this planet and added a hypothetical water-covered, Earth-size planet around the Kepler 35 AB stars. They used a 3-D General Circulation Model and other tools to determine how this planet’s climate would behave as it orbited the host stars with orbital periods between 341 and 380 days.

The results: “Double-star systems of the type studied here are excellent candidates to host habitable planets, despite the large variations in the amount of starlight hypothetical planets in such a system would receive,” said Popp, now at Sorbonne Université. 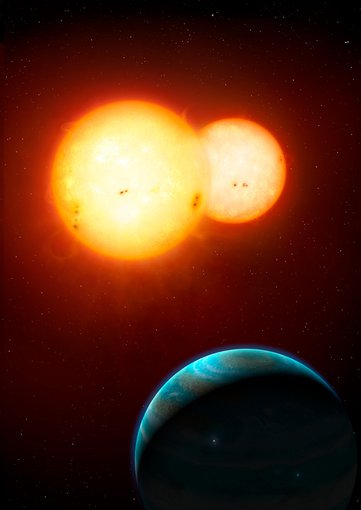 The artistic rendition depicts the Kepler-35 planetary system. In the foreground, Kepler-35b, a Saturn-size world orbits its host stars every 131 days. The discovery of Kepler-34b and Kepler-35b establishes a new class of planets that orbit two stars, and suggests many millions of such systems exist in our galaxy.Image credit: Mark A. Garlick / space-art.co.uk.

This conclusion is based on the fact that the planet, if it had a sufficient concentration of CO2 in its atmosphere, could avoid falling into a complete frozen Snowball or a scalding Runaway Greenhouse state even though the binary stars make its path more complex. There are, of course, many more features beyond having liquid surface water that a planet needs to become habitable, but that is true of all exoplanets.

Said Eggl, “We show that it’s worth targeting double-star systems. Our research is motivated by the fact that searching for potentially habitable planets requires a lot of effort, so it is good to know in advance where to look.”

The science of circumbinary planets, and planets in multi star systems, has been growing fast as scientists understand more about just how ubiquitous binary star systems are. Indeed, Indeed, some contend that all stars began as binaries and the single stars broke away as they evolved.

While the number of circumbinary planets orbiting the two host stars is small as a percentage of the planets out there, the number of planets orbiting a star that also has a stellar companion is quite a bit larger. This is the conclusion of Markus Mugrauer of Friedrich Schiller University in Jena, Germany, in a 2019 article in the Monthly Notices of the Royal Astronomical Society. 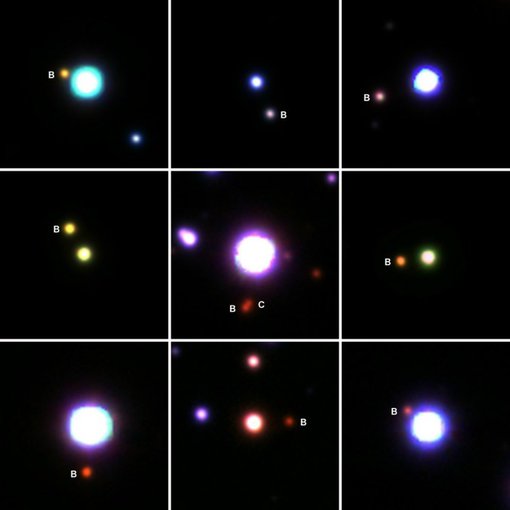 These images show some of the exoplanet host stars with companion stars (B, C) that were found during the project. The images are composite images taken with the Panoramic Survey Telescope and Rapid Response System (PanSTARRS) . The image in the middle shows a hierarchical triple star system.Image credit: Mugrauer, PanSTARRS.

His study, using data from the European Gaia space telescope, led to the characterization (and sometimes discovery) of some 200 multiple star systems that contain exoplanets. These are different from the circumbinary systems, which have what are termed P-type planets which usually have very wide orbits. Mugrauer studied S-type planets, where the exoplanet orbits only one of the binary (or triple) suns.

But the survey does add to the understanding of stellar systems and their planets.

“Multiple star systems are very common in our Milky Way,” explains Mugrauer. “If such systems include planets, they are of particular interest to astrophysics, because the planetary systems in them can differ from our solar system in fundamental ways.”

The companion stars — which must be in rough equidistance with the exoplanet host stars — vary as to their mass, temperature and stage of evolution. The heaviest among them weigh 1.4 times more than our sun, while the lightest have only 8 per cent of the sun’s mass. Most of the companion stars are low-mass, cool dwarf stars that glow faintly red.

However, eight white dwarfs were also identified among the faint stellar companions. A white dwarf is the burnt-out core of a sun-like star, which is only about as big as our Earth, but half as heavy as our sun. These observations show that exoplanets can indeed survive as intact bodies during the final evolutionary stage of a nearby sun-like star. 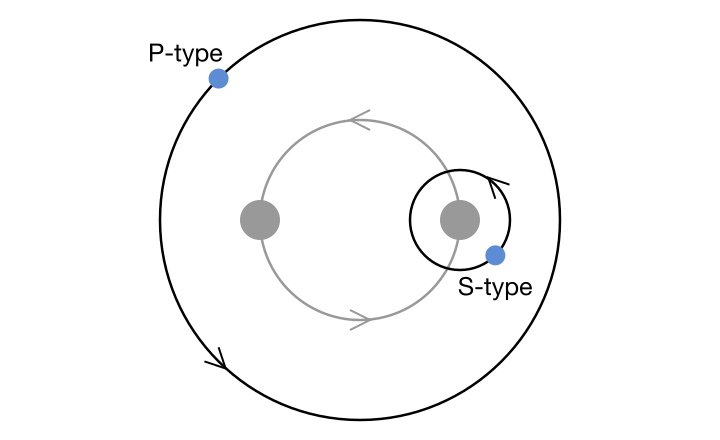 Diagram showing binary star system with “P-type” planets (which orbit both stars) and “S type” (which orbit only one star.Image credit: Wiki Commons.

According to Mugrauer, S and P type planets are quite different astrophysically — in terms in terms of how they formed and their orbital and physical stability. While his focus is on S type planets and their stars, but told me that some of the planets he studied might actually be P type stars when more fully characterized.

“It seems that planet formation in these systems is less likely and/or the stellar companions alter the orbits of the planets throughout their evolution,” he said. “That holds for close but also for wide stellar systems, but due to different mechanisms.”

But since astronomers estimate that up to half of the 100 billion stars in our galaxy are part of a binary system. that’s still a lot of binaries with planets one or both stars.