About Image
This artist’s concept shows the trajectory and configuration of NASA’s OSIRIS-REx spacecraft during Matchpoint rehearsal, which is the final time the mission will practice the initial steps of the sample collection sequence before touching down on asteroid Bennu.NASA/Goddard/University of Arizona
This artist's concept shows the Origins Spectral Interpretation Resource Identification Security - Regolith Explorer (OSIRIS-REx) spacecraft contacting the asteroid Bennu with the Touch-And-Go Sample Arm Mechanism or TAGSAM.NASA's Goddard Space Flight Center
Oct. 9, 2020
Feature Story

Surprising Insights Into the Asteroid Bennu’s Past, as OSIRIS-REx Prepares For a Sample-Collecting “Tag”

Long before there was an Earth, asteroids large and small were orbiting our young sun. Among them was one far enough out from the sun to contain water ice, as well as organic compounds with lots of carbon. In its five billion years or so as an object, the asteroid was hit and broken apart by other larger asteroids, probably grew some more as smaller asteroids hit it, and then was smashed to bits again many millions of years ago. Some of it might have even landed on Earth.

The product of this tumultuous early history is the asteroid now called Bennu, and the destination for NASA’s OSIRIS-REx (Origins, Spectral Interpretation, Resource Identification, Security, Regolith Explorer) mission. On October 20, the spacecraft will make its dramatic final descent, will touch the ground long enough to collect some samples of the surface, and then will in the months ahead return home with its prized catch.

The sample will consist of grains of a surface that have experienced none of the ever-active geology on Earth, no modifications caused by life, and little of the erosion and weathering. In other words, it will be a sample of the very early solar system from which our planet arose. 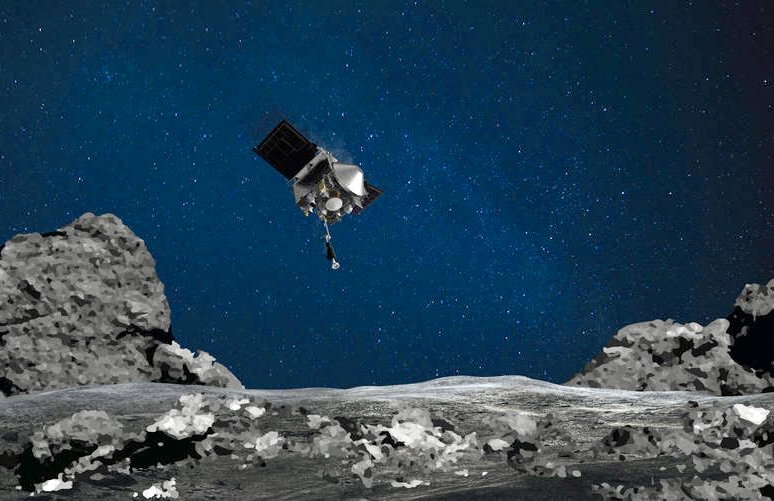 Artist illustration of the OSIRIS-REx spacecraft as it will approach the asteroid Bennu to collect a sample of ancient, pristine solar system material. The pick-up”tag” is scheduled for October 20, 2020.Image credit: NASA Goddard Space Flight Center, University of Arizona.

“This will be our first chance to look at an ancient, carbon-rich environment – the most pristine example of the chemistry of the very early solar system,” said Daniel Glavin, an astrobiologist at NASA’s Space Flight Center and a co-investigator of the OSIRIS-REx team. “Anything as ancient on early Earth would have been modified many times over.”

“But at Bennu we’ll see the solar system, and the Earth, as it was chemically before all those changes took place. This will be the kind of pristine pre-biotic chemistry that life emerged from.” 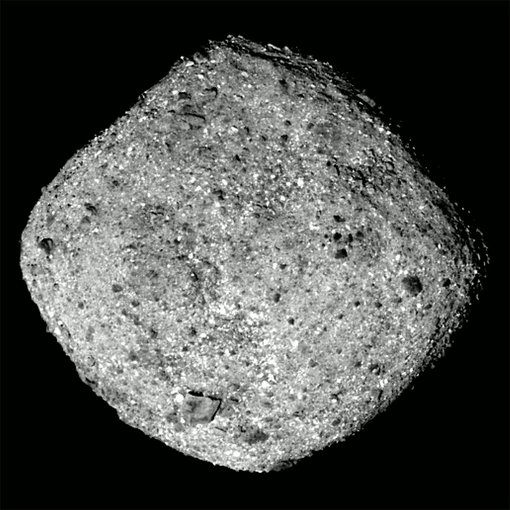 This image of Bennu was taken by the OSIRIS-REx spacecraft from a distance of around 50 miles (80 km).Image credit: NASA/Goddard/University of Arizona.

Bennu is an unusual asteroid. It orbits relatively close to Earth — rather than in the main asteroid belt between Mars and Jupiter — and that’s one of several main reasons why it was selected for a visit. It is also an asteroid with significant amounts of primeval carbon and organics, which is gold for scientists eager to understand the early solar system, planet formation and the origin of life on Earth.

Bennu is thought to be a “rubble pile” asteroid, meaning smaller fragments from the original large asteroid came together some 700 million to 2 billion years ago to form Bennu. 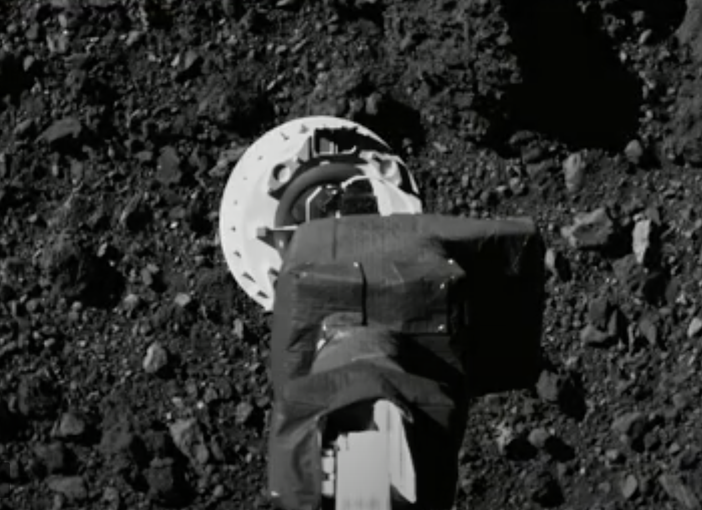 Image from OSIRIS-REx at approximately 420 feet (128 meters) above the surface of Bennu. The spacecraft’s sampling arm – called the Touch-And-Go Sample Acquisition Mechanism (TAGSAM) – is visible in the lower part of the frame.Image credit: NASA/Goddard/University of Arizona.

The small pieces of Bennu stay together because of gravity and another force scientists call “cohesion,” which makes soils and sands stick together. But based on existing measurements, Bennu is about 20 to 40 percent empty space inside. If Bennu were placed on the surface of Earth, our planet’s gravity would cause the whole structure to fall apart.

While OSIRIS-REx is the very first NASA sample return mission to an asteroid, it follows in the footsteps of the Japan Aerospace Exploration Agency’s Hayabusa and Hayabusa2 asteroid sample return missions. The first mission was completed with a small amount of asteroid dust returned and the second is on its way back to Earth now.

OSIRIS-REx reached Bennu almost two years ago and has been orbiting it and sending back data of all kinds. While the first actual touch of Bennu is scheduled for Oct. 20, engineers have performed remote-control test descents to within about 200 feet of the asteroid several times in preparation of the tag.

That final descent will lead to the release of a burst of nitrogen gas to dislodge surface material and then collecting by the sampler on the end of a robotic arm. A timer in the instrument will allow the “tag” to last only five second before the spacecraft begins to drift away from the asteroid.

Three sample collection attempts can be made if the first or second do not succeed.

The spacecraft’s surface “tag” and sample collection will be recorded by a variety of cameras, but will take a day or more to get the data back and process the images and later video before heading home in 2021. There will no doubt be surprises, as there have been already. 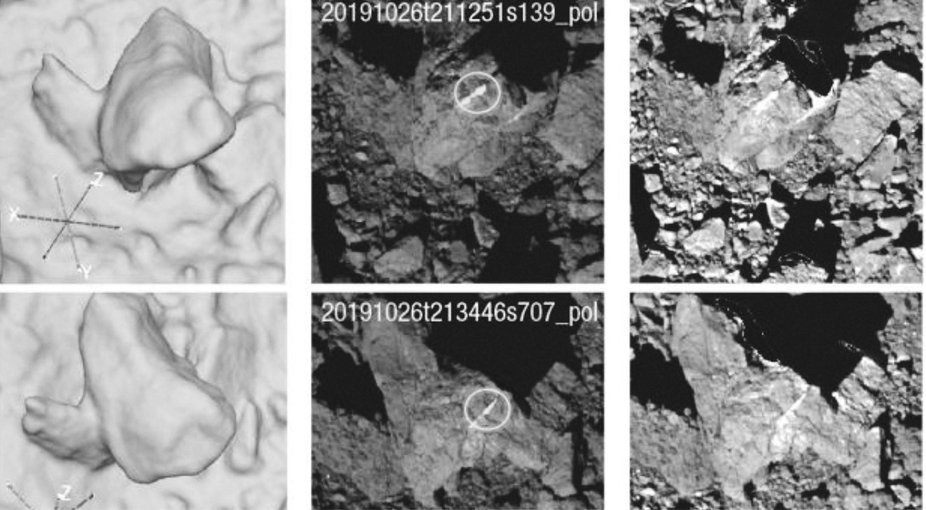 Viens in a Bennu boulder tell of running water on the asteroid’s parent body long, long ago. Orientation information on the far left comes from the OSIRIS-REx Laser Altimeter (OLA), contributed by the Canadian Space Agency. In the center are PolyCam images with the vein marked with a circle The same images on right have be photometrically corrected. The circled vein is ~8 cm wide and 52.5 cm long.Image credit: NASA.

For instance, a set of papers in the journal Science released on Thursday reported that the asteroid — about one-third of a mile in diameter and orbiting the sun only slightly further out than Earth — has been found to have a range of boulder types from different asteroids, some of which have carbonate veins associated with the long-ago presence of running water.

The lead author of the boulder vein finding is Hannah Kaplan, a research scientist at the Goddard Space Flight Center. She said that scientists thought it was possible that some tiny carbonate veins would be found on Bennu, but they could not be detected from Earth and only came into view when the spacecraft neared the asteroid. Some of the veins are as long as a meter (3.3 feet), Kaplan said.

“We were very surprised to find them — they’re larger than any example we have,” she said. “We’re familiar from meteorites on Earth that have some very small-scale veins, but they’re nothing like what we found.”

The veins are filled with carbonate minerals, which would have been in the water that flowed through cracks in the rocks and left behind their signature. Similar kinds of veins on Mars were an important finding of the Curiosity rover.

The veins are part of a larger water story on the asteroid, Kaplan said. Bennu also contains many minerals that can only be formed in the presence of water, suggesting that the amount of water on the Bennu parent asteroid was not insignificant.

And how did that running water exist in such a frozen environment? Kaplan said that the primary heat source was probably not the new sun but rather heat from the radioactive decay of elements on the asteroid. Glavin pointed to radioactive aluminum26 — known to be present in the early solar system and relatively short-lived — as the likely candidate.

Because of the presence of so many of these minerals produced only in a watery environment, Bennu is considered a “wet” asteroid. 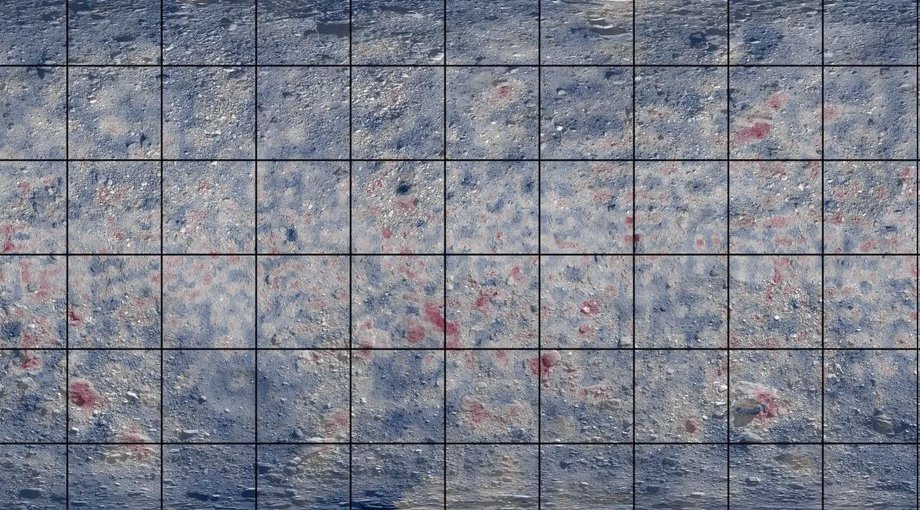 In another surprise, the asteroid is not smooth but rather has 200 large boulders scattered about that could upset the “tag.” The boulder hazard has forced the team to target an area just 16 meters across for sampling, only 1/10th the size of the planned touchdown site.

And every so often, the asteroid ejected coin-size pebbles, probably propelled by meteoroid impacts or solar heating.

“Bennu has not made things easy for us,” says Mike Moreau, the mission’s deputy project manager at NASA’s Goddard Space Flight Center.

Another reason that Bennu was selected for the OSIRIS-REx mission is that it is in a near-Earth orbit that could, potentially, result in a future collision.

“The likelihood is not great, but Bennu has a non-zero chance of hitting Earth,” said Kaplan. “It is circling the sun in an Earth-crossing orbit, which means it could come into contact.”

“Because of that possibility, it is important to know how its orbit might change over time and to know what it’s made of.”

The asteroid will make its potentially hazardous pass of Earth in 2135. 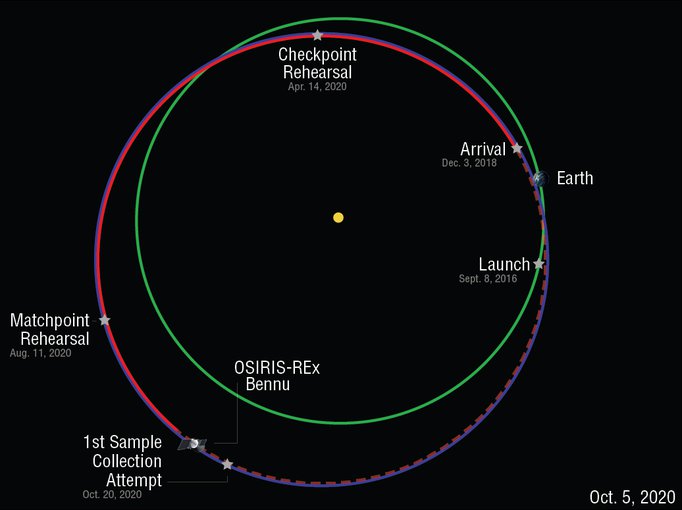