Spotting Exoplanets through the Haze 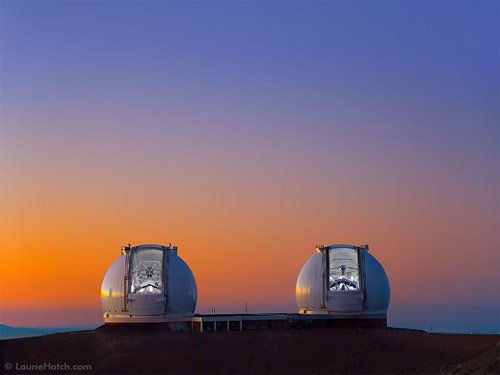 The sun sets on Mauna Kea as the twin Kecks prepare for observing.Image credit: Laurie Hatch.

Researchers supported in part by the NASA Astrobiology Program have tested a method to help ground-based telescopes observe exoplanets despite interference from turbulence in the Earth’s atmosphere. The tests were performed with the Keck II observatory.

When telescopes on Earth’s surface view the sky, they are peering through the planet’s atmosphere. This can sometimes cause interference that makes certain objects, like exoplanets, difficult to study. Adaptive optics can help mitigate atmospheric turbulence. This involves measuring turbulence (wavefront measurement) and then changing to compensate. However, there are millisecond delays in between taking measurements and making adjustments, and this tiny fraction of time can have huge implications for observations.

A method for compensating for the time lag, dubbed predictive wavefront control (pWFC), has been previously tested on the Subaru telescope. The new paper reports the results of testing this method for application in the near-infrared pyramid wavefront sensor (PYWFS) that was recently installed in the Keck II telescope.

The study, “Demonstrating predictive wavefront control with the Keck II near-infrared pyramid wavefront sensor,” was published in SPIE Optical Engineering and Applications. The work was supported by the Nexus for Exoplanet System Science (NExSS).  NExSS is a NASA  research coordination network supported in part by the  NASA Astrobiology Program. This program element is shared between NASA’s Planetary Science Division (PSD) and the Astrophysics Division. This research is a critical part of NASA’s work to understand the Universe, advance human exploration, and inspire the next generation. As NASA’s Artemis program moves forward with human exploration of the Moon, the search for life on other worlds remains a top priority for the agency.