About Image
Future Mars rovers could carry onboard water to perform subcritical water extraction in order to detect amino acids despite the presence of perchlorate in the Martian regolith.
May 7, 2018
Research Highlight

Search for Life on Mars Could Get Water-Enhanced Boost

A new experiment designed to detect amino acids on Mars, in spite of the reactive perchlorate in the Martian soil that typically breaks organic compounds down, could fly on a future mission to Mars to help in the search for life there.

Where there are amino acids, there may be – or once was – life. So naturally, when NASA’s Phoenix Mars Lander collected samples of the red planet’s soil (a.k.a. regolith), scientists looked for these organic compounds. Yet when they tested the regolith for them, they were nowhere to be found. There had to be some organic compounds though, even if they just came from meteorites that landed on Mars.

When a wet chemical analysis was done the problem became obvious. The alkaline soil samples contained almost one percent perchlorate (ClO4), which is a highly reactive chemical. So when the scientists had originally tested for organics using pyrolysis (i.e. using high temperatures to break compounds down), the perchlorate, which is used on Earth as an explosive and fuel propellant, destroyed the very molecules they were looking for. Perchlorate specializes in combusting organics when heated – no wonder there were none in any of the samples.

To get around the problem, a new tool was needed, and not only did it need to deal with the perchlorate issue, it also had to be simple enough to safely make it to Mars on the next lander. A recent paper by Dr Aaron Noell at NASA’s Jet Propulsion Laboratory (JPL) looked at using subcritical water extraction (SCWE – pronounced ‘squee’) as a solution to the pyrolysis/perchlorate problem.

“SCWE sounds more complicated than it is,” Noell tells Astrobiology Magazine. “We jokingly refer to it as making Martian espresso, because basically, you put high-pressure hot water into the soil sample. Pyrolysis is a very good technique for many compounds, but amino acids are preferably soluble in water.” 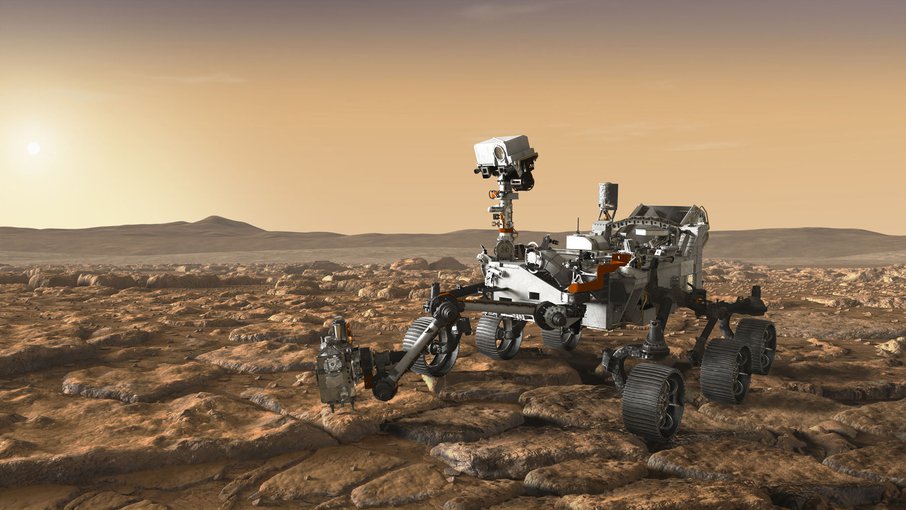 Future Mars rovers could carry onboard water to perform subcritical water extraction in order to detect amino acids despite the presence of perchlorate in the Martian regolith.Image credit: NASA/JPL–Caltech.

In his study, Noell used three different soil analogs (a JSC Mars‐1A simulant, an Atacama desert soil, and an AntarcticaDry Valleys soil) from Earth, as well as a control, to test the SCWE technique. He and his team tested SCWE at temperatures of 185, 200, and 215 degrees Celsius and for various times ranging from ten minutes to two hours. They found “high yields of native amino acids… with minimal disruption of the distribution of those amino acids, even in the presence of a perchlorate salt,” according to the paper’s abstract.

Samuel Kounaves, Professor of Chemistry at Tufts University and Lead Scientist for the Wet Chemistry Lab on NASA’s Phoenix Mars Lander, and who was not involved in the research for this paper, thinks SCWE could be a good way to analyze Martiansoils on future missions.

“With some improvements, SCWE would deliver a lot of advantages to a space mission,” he says, adding that he would like to see future tests try even higher temperatures than 215 degrees, which would make more large organic molecules soluble, and would also help researchers understand the full impact of the perchlorate on the SCWE testing method. He’d also like to see testing on Mars simulant soils that are closer to what’s found on Mars than some of those used in the most recent research.

However, Kounaves liked the simplicity of using water as a solvent. “Transporting water [on a Mars lander] is relatively simple since it is easy to store and non corrosive,” he says. “Other things that are more complex aren’t as easily stored. And once you extract things with water, they are easier to work with.”

Noell calls SCWE a “tantalizing technique” because the properties of the water change as the temperature is raised, so scientists can use it to target other compounds when testing soils. “Amino acids have long been high-priority targets of the astrobiology community,” he says. “We want to move on and start targeting… long-chain fatty acids and potentially even some of the polycyclic aromatic hydrocarbons (PAHs; these are large molecules made from hydrogen and carbon atoms), which are not typically soluble in water, but at the high temperatures of SCWE, they start to be.” This means that if SCWE was part of a future mission’s wet lab, one extraction solvent would work for a wide range of different types of compounds. 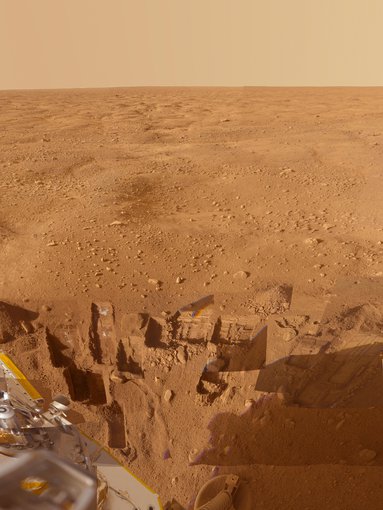 The view of the north polar region of Mars from the Phoenix lander, which discovered perchlorate in the Martian regolith.Image credit: NASA/JPL–Caltech/University of Arizona/Texas A&M University.

Testing soils with SCWE has a third advantage: at higher temperatures the process helps break apart polypeptides (short chains of amino acids linked together) into individual amino acids. This allows researchers to determine where the amino acids came from, which in turn provides clues as to the existence of life versus the building blocks for life. More elaborate chemistry often indicates life, says Noell: “When molecules of greater complexity are more easily found, then scientists can start determining whether past life, present life, or some abiotic Martian process is the most likely culprit,” Then scientists can start asking the next set of questions about life on Mars. Are the polypeptides similar to those found on earth? If so, in what type of organism are they found?

Speaking of which, the perchlorate in the Martian regolith isn’t all bad news. While it did get in the way of finding the signs of life scientists are looking for, its presence is actually a good sign for the possible habitability of Mars. Yes, perchlorate is combustible, but as an anti-freezing agent it also facilitates liquid water on Mars, which would otherwise be impossible at an atmospheric pressure that’s about 0.6 percent that of Earth. And since perchlorate can be broken down to release oxygen, it means there’s an on-planet source of what we need to breathe.

As for life on Mars, there may be little evidence to be found on the surface, no matter what the chemistry or techniques used to detail it.

“At this point, all the evidence that I have seen points to the surface of Mars being bad for life – but we may find [life] underground,” saysKounaves. “There could be some chemotropic bacteria that uses perchlorate as an energy source – there could be a whole ecosystem that even had liquid water available to it .”

So to find life on Mars, Kounaves says, “We are going to need to drill.”

The study, “Subcritical water extraction of amino acids from Mars analog soils,” was published in the journal Electrophoresis. The work was supported by the NASA Astrobiology Science and Technology Instrument Development (ASTID) program. From 1998 – 2013, ASTID supported astrobiology related instrumentation development. Proposals formerly competed under ASTID are now covered by the instrument development programs restructured to the current PICASSO and MatISSE programs. NASA Astrobiology provides resources for this and other Research and Analysis programs within the NASA Science Mission Directorate (SMD) that solicit proposals relevant to astrobiology research.