RNA-DNA Chimeras and the Transition to an RNA/DNA World 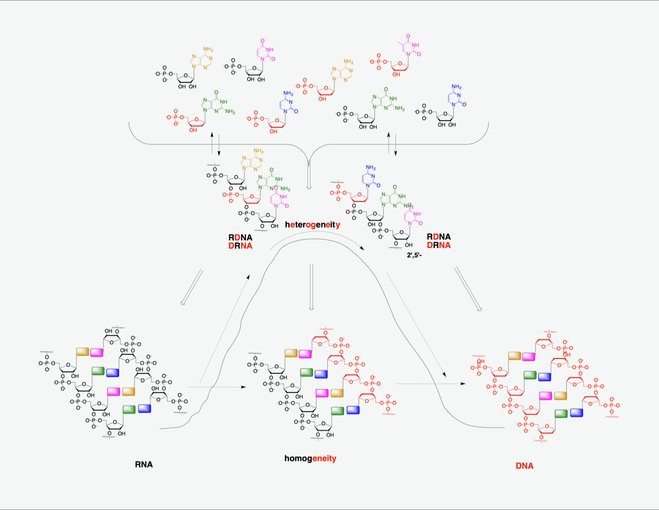 Heterogeneity to Homogeneity: Homogeneous backbone RNA and DNA systems could accumulate and emerge from a heterogeneous pool of compounds and intermediates based on increasing thermal and thermodynamic duplex stability. Credit: Gavette et al. (2016)

One theory concerning the origin of life on Earth is that proteins and DNA were preceded by an RNA-world, where RNA performed functions in cells ranging from information storage to the catalysis of chemical reactions. Understanding how life could have transitioned from an RNA-world to the RNA/DNA/Protein-world we know today is an important aspect of astrobiology research.

A new study examines the possibility that the emergence of DNA was not a smooth transition from RNA due to ‘clutter’ in a protobiological world. It is possible that a molecule with a heterogeneous RNA-DNA backbone existed at some point in life’s history, and contained chimeric sequences of RNA and DNA fused together. There are some examples of RNA-DNA heterogeneity in nature today, but the possibility that heterogeneous RNA-DNA structures were part of life’s evolutionary process has not been fully considered before.

The new study shows that heterogeneous backbones made up of chimeric-duplexes are less stable than homogenous backbones of RNA or DNA. This instability would have made the transition from a homogeneous RNA-world to an RNA/DNA world difficult. The results point to an alternative scenario for how homogeneous RNA and DNA systems might have accumulated and co-evolved starting from a heterogeneous mixture of ribo- and deoxyribonucleotides and sequences.

The paper, “RNA-DNA Chimeras in the Context of an RNA-world Transition to an RNA/DNA-world,” was published in the journal Angewandte Chemie. The study was supported by the Exobiology element of the NASA Astrobiology Program and the National Science Foundation through the Center for Chemical Evolution (CCE).