About Image
Artist impression of a strand of DNA.GA Tech/CCE
The Center for Chemical Evolution (CCE) is a collaborative program studying the chemical origins of life and is based at the Georgia Institute of Technology in Atlanta.GA Tech/CCE
A model of a long helix similar to RNA. After chemists produced momoners closely resembling the building blocks of RNA in easy, highly productive reactions, the resulting proto-nucleotides spontaneously joined up into long polymers that look like RNA.GA Tech
Stanley Miller appears in the Astrobiology Graphic Histories, carrying out landmark research into the origins of life. Available at: https://astrobiology.nasa.gov/resources/graphic-histories/Astrobiology Program
Artist's concept of Kepler-62f, a super-Earth. Scientists are trying to understand the origin of life and generalize the results to other potentially habitable planets in the Universe.NASA/Ames/JPL-Caltech
May 6, 2016
Feature Story

The Center for Chemical Evolution

The Center for Chemical Evolution (CCE) aims to make headway in our understanding of the chemical origin of life.

The Center for Chemical Evolution (CCE) aims to make headway in our understanding of the chemical origin of life by demonstrating how small molecules can assemble into RNA-like and protein-like polymers. In modeling prebiotic chemistry, this collaborative program, based at the Georgia Institute of Technology in Atlanta, uses advanced analytical techniques such as mass spectrometry, gas chromatography, high-performance liquid chromatography, and nuclear magnetic resonance spectroscopy. When origin of life experimental studies began, back in the 1950s, simple paper chromatography was the go-to method. One big advantage of these newer technologies is that they can identify unexpected products of prebiotic reactions.

The Center for Chemical Evolution (CCE) is a collaborative program studying the chemical origins of life and is based at the Georgia Institute of Technology in Atlanta.Image credit: GA Tech/CCE.

The CCE is primarily funded by the chemistry division at the National Science Foundation (NSF) as a part of its Center for Chemical Innovation (CCI) program, a network of nine centers each focused on a major research challenge in chemistry. Unlike the other members of the CCI network, the CCE is also co-funded by the NASA Astrobiology Program, whose interest lies in furthering research into prebiotic chemistry as it relates to understanding the origin of life on Earth and the potential for life elsewhere in the Universe. NASA also participates in ongoing oversight and management of the CCE. Funding commenced in 2007 under Phase I and, in 2010, the program moved into Phase II with an annual budget of $4 million and an expanded collaboration that includes researchers from other institutions. Phase II funding was renewed in 2015 for an additional five years.

The CCE’s astrobiology-related research at Georgia Tech dates to the early 2000s, when Nicholas Hud and Thomas Orlando, who had both recently joined the chemistry faculty, began research projects relevant to understanding the chemical origins of life. In concert with other researchers, Hud and Orlando focused the first round of funding by looking into the way early life progressed from small molecules to the first nucleic acids and onto the first peptides, Covert said. 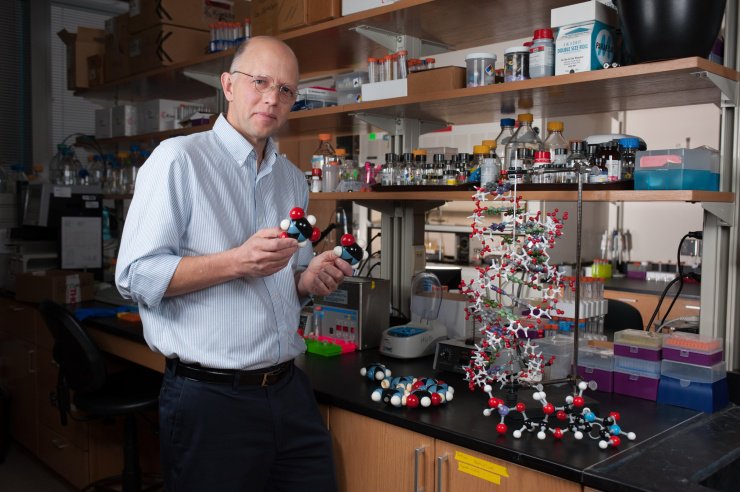 Hud, who had been funded by a NASA Astrobiology grant for research on prebiotic chemistry, knew the space agency had an interest in the origins of life.

“In 2009 we were already mapping out a Phase II Center,” said Hud, the current director of the CCE. “We were gathering the people to work together in the bigger center when NASA approached me and said ‘You’re putting together a center with a number of the people we were already thinking should be working together. You are already formulating it the way we want.’ ”

As Hud continued plans for Phase II, NSF and NASA met to discuss a possible collaboration. It was recognized that NASA had more access to astrobiology researchers and more experience in the origin of life field than the NSF. NASA therefore joined the NSF in supporting the CCE when the Center moved to Phase II funding in 2010. The agencies remain active partners today.

“NASA knows the reviewers and the history of the field,” Hud said. “It felt great to hear that NASA would like to step up and help support our Phase II Center.” 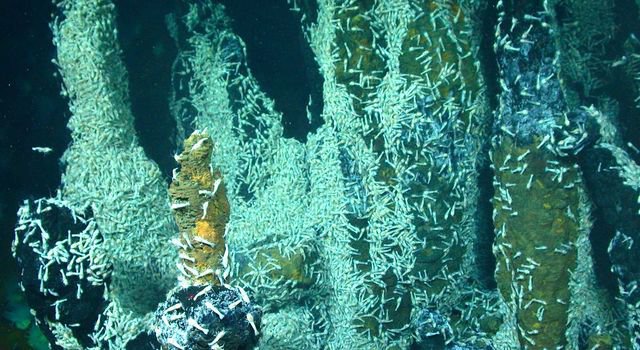 The CCE made several key discoveries in the early Phase II funding cycle (2010-2015). Hud stated that specifically, the Center hypothesized that the polymers of life started with chemical building blocks that were distinct from those found in life today. In considering the origins of RNA and DNA, which are connected to sugar-phosphate backbones, the Center’s researchers have looked at precursor molecules for each component of these RNA and DNA. CCE members have shown that some possible precursors readily react with one another to form structures that resemble RNA.

Several research groups are studying how amino acids could have originally formed peptides, but CCE’s unique contribution is identifying that very similar hydroxy acids mixed together with amino acids can more efficiently create peptides. Through this groundwork, the Center is providing fresh insight into which molecules on the prebiotic Earth may have helped life get started. The current Phase II funding (starting in 2015) will determine if these monomers can demonstrate rudimentary evolution.

“We’re trying understand how inanimate chemistry made this transition towards life-like polymers, and how these polymers then evolved,” Hud said. “There’s a top-down approach in which biologists look at the sequence of genes and genomes to understand the tree of life and how it evolved. On the other side, we want to understand the chemistry of the molecules that became life: if you have these small molecules, like amino acids and the bases of RNA, how did these come together and make the polymers that are the forerunners of proteins and RNA. It’s an unresolved gap in our understanding of chemical evolution.” 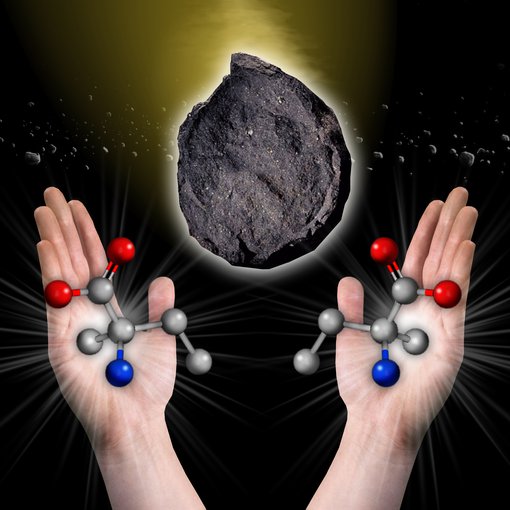 Artist's impression of amino acids (the building blocks of peptides) and an asteroid, symbolizing an alternative method by which amino acids could have arrived on Earth. Image credit: NASA/Mary Pat Hrybyk-Keith .

For the NASA Astrobiology Program, key results from the CCE so far have been this work in self-assembly, changes in the understanding of polymer folding, and advances in mass spectrometry to push forward the science.

“They’re doing great science, which would not have been possible without the CCI,” said Michael New, the program officer of the Exobiology and Evolutionary Biology element of the NASA Astrobiology Program. “It’s a very successful collaboration between NASA and NSF, hopefully the start of many.”

New called the Center’s work on self-assembly of molecules “ground-breaking” and noted that the line of inquiry began decades ago with crystalline sugars. Innovative self-assembly study is now possible at the CCE using room-temperature ionic liquids, which are believed to be closer to the origins of life. 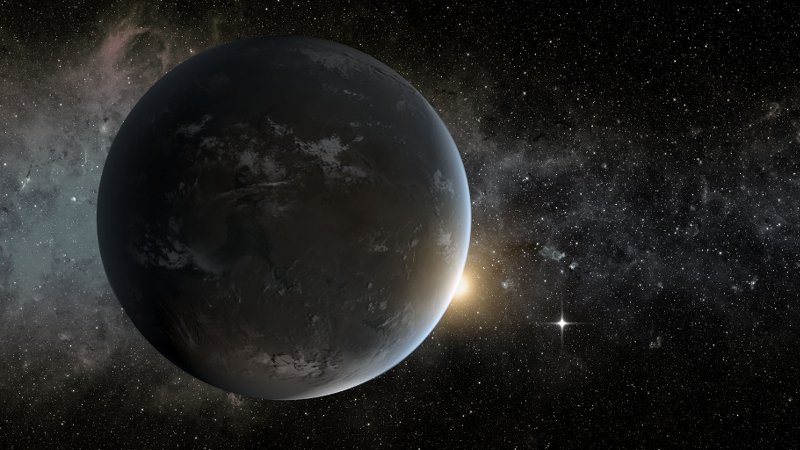 Artist's concept of Kepler-62f, a super-Earth. Scientists are trying to understand the origin of life and generalize the results to other potentially habitable planets in the Universe.Image credit: NASA/Ames/JPL-Caltech.

“They’ve been able to see changes in how things fold, and getting some things to fold. They have potentially a new set of solids to use — that’s all interesting stuff from a utility point of view,” New said.

Some of the key researchers in the center include:

Facundo Fernandez, Vasser Woolley Foundation chair in bio-analytical chemistry, Georgia Tech: In the first Phase II funding, Fernandez’s team reinvestigated the famous Miller-Urey experiment that was meant to simulate conditions found on early Earth. They confirmed that a viable chemistry was in place to synthesize proto-peptides and they developed surface analysis tools to map chemicals on the surface of heterogeneous relations occurring on minerals. In this next Phase II, Fernandez’s team plans to further push forward spectroscopic techniques to investigate more complex chemical mixtures, such as examining hundreds of sequences of proto-peptides (depsipeptides). “We are now in the process of developing a proto-peptidomic approach to identify and quantify those peptides with high throughput. I find this challenge nothing short of fascinating,” he said.

Ramanarayanan Krishnamurthy, associate professor of chemistry, Scripps Research Institute: The first Phase II funding showed that ribulose, an isomer of ribose, can be converted to an RNA isomer. The team also examined ribulose’s base-pairing properties and found that natural selection for RNA can take place at the oligomer level (riboseNA vs. ribuloseNA), if not at the level of a sugar (ribose or ribulose). “That means there are different levels of selections and each one is a refinement of the other,” he said. “We need not have one defining selection that determines the outcome of RNA or not. Such a realization allows for a gradual and continual selection process that is conducive to chemical evolution.” In the next Phase II, his team aims to demonstrate that self-assembly and chemical evolution of a proto-biopolymer can happen at the same time. 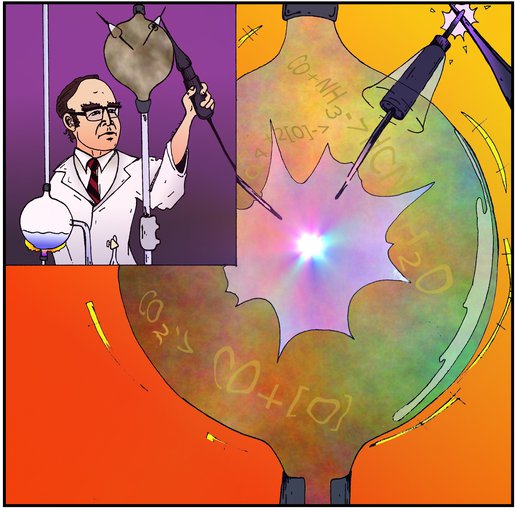 Stanley Miller appears in the Astrobiology Graphic Histories, carrying out landmark research into the origins of life. Available at: https://astrobiology.nasa.gov/resources/graphic-histories/Image credit: Astrobiology Program.

Thomas Orlando, chemistry professor, Georgia Tech: His main contributions to the Center are developing instrumentation and approaches to study interfacial processes and complex systems, with a goal to bring new tools from surface science (physical and chemical phenomena where two phases intersect, such as liquid and solid) and concepts (mostly from chemical physics) to better understand the origins of life. “I am not a pre-biotic chemist, though I do care about the physics and chemistry governing interfacial reactions that may have occurred under plausible pre-biotic scenarios,” he said. In the next Phase II grant, Orlando’s team will aim to model experimentally and theoretically complex interface reactions that could have occurred on the early Earth.

Martha Grover, associate professor of chemical and biomolecule engineering, Georgia Tech: During the past five years at the CCE, she has worked on system level modeling and analysis of biopolymer evolution. This included a theoretical study to identify reaction and diffusion constants that would allow a replicating biopolymer to take hold in a diverse population, based on a simple catalytic function. Her team also modeled the polymerization kinetics and mass transfer of a protopeptide candidate. Going forward and building on this work, her team is focusing on the design of a protopeptide system that can undergo selection and demonstrate rudimentary evolution.