About Image
Combining more than 400 images, NASA's Phoenix Mars Lander views its surroundings in the Red Planet's northernmost region. The full-circle panorama in approximately true color shows the polygonal patterning of ground at the landing area, similar to patterns in permafrost areas on Earth.NASA/JPL-Caltech/University of Arizona/Texas A&M University
This mosaic of images from the Surface Stereo Imager camera on NASA's Phoenix Mars Lander shows several trenches dug by Phoenix, plus a corner of the spacecraft's deck.NASA/JPL-Caltech/University of Arizona/Texas A&M University
Oct. 31, 2019
Research Highlight

Researchers have provided new calibrations for the humidity sensor on NASA’s Phoenix lander on Mars (the Phoenix Thermal and Electrical Conductivity Probe (TECP) relative humidity sensor). Both the Phoenix lander and the Mars Science Laboratory (MSL) have returned measurements of relative humidity at the martian surface. Understanding water vapor pressure at different locations on Mars can help astrobiologists interpret the data being returned by these and future missions. Humidity measurements are necessary to interpret the global water cycle on Mars and, ultimately, to better understand the potential for habitable environments in the planet’s past or present.

The research team placed a replica of the TECP into the Michigan Mars Environmental Chamber, where the instrument was then subjected to the full range of environmental conditions experienced at the Phoenix landing site. The new calibrations include extremes that were not previously covered in calibrations of the Phoenix data, including the warmest and driest conditions experienced at the site during the martian daytime. The results for nighttime were in agreement with previous findings. However, the team found that water content values during the daytime were an order of magnitude larger than previous calibrations. These higher numbers are consistent with measurements from orbit by the Mars Reconnaissance Orbiter (MRO).

The Phoenix landing site rests in the martian arctic, and can provide a contrast to the lower latitudes on the planet being explored by NASA’s Mars Science Laboratory (MSL). When comparing results from the two missions, it appears that there is a stronger atmosphere-soil interchange in the arctic. The data also indicates that the formation of saline solution (brine) at the Phoenix site might only occur between midnight and 6 am on a handful of days (sols) in the martian year. 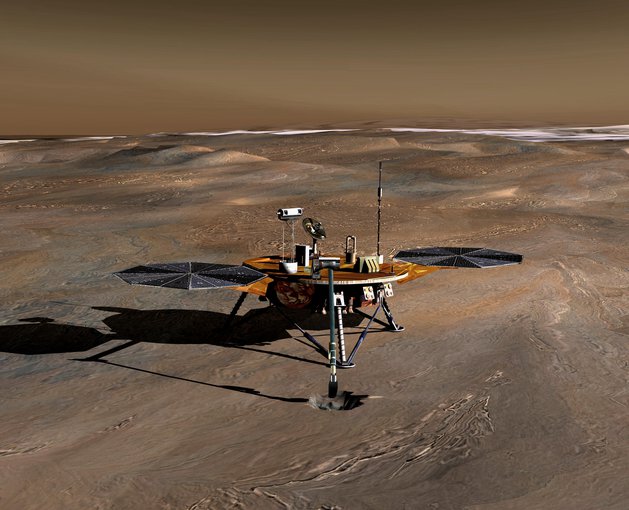 An artist concept of Phoenix on Mars.Image credit: NASA.

The study, “Relative Humidity on Mars: New Results from the Phoenix TECP Sensor,” was published in the journal JGR Planets.The work was supported in part by NASA Astrobiology through the Exobiology Program. This newly-revealed science is also a critical part of NASA’s work to understand the Universe, advance human exploration, and inspire the next generation. As NASA’s Artemis program moves forward with human exploration of the Moon, the search for life on other worlds remains a top priority for the agency.