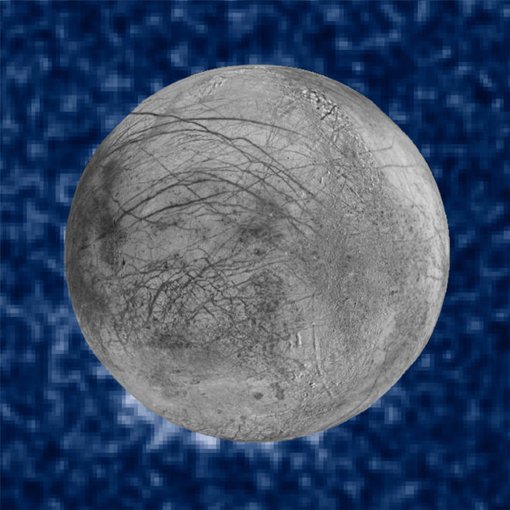 This composite image shows suspected plumes of water vapor erupting at the 7 o’clock position off the limb of Jupiter’s moon Europa. The Hubble data were taken on January 2014, and appear to show plumes that spit out as much as 125 miles. The image of Europa, superimposed on the Hubble data, is assembled from data from the Galileo and Voyager missions. (NASA/ESA/W. Sparks (STScI)/USGS Astrogeology Science Center)

Europa is a moon no bigger than our own and is covered by deep layers of icer, but it brings with it a world of promise. Science fiction master and sometimes space visionary Arthur C. Clarke, after all, named it as the most likely spot in our solar system to harbor life, and wrote a “2001: A Space Odyssey” follow-up based in part on that premise.

Many in the planetary science and astrobiology communities are similarly inclined and have supported a specifically Europa mission geared to learning more about what is generally considered to be a large ocean beneath that ice.

Along the way, Europa became the only object deemed by Congress to be an obligatory NASA destination, and formal plans for such a voyage have been under way — however slowly — for several years. Formal development of the “Europa Clipper” flyby project began last year, after a half decade of conceptual work.

The logic for the flyby got a major boost on September 26, 2016 when a team using the Hubble Space Telescope reported that they had most likely detected plumes of water erupting out of Europa on three separate occasions.

Because of the difficulty of the observation — and the fact that plumes were found on 3 out of 10 passes — nobody was willing to claim that the finding was definitive. But coupled with an earlier identification of a Europa plume by a different team using a different technique, the probability that the plumes are real is getting pretty high.

And if there really are plumes of water vapor or ice crystals being pushed through Europa’s thick surface of ice, then the implications for the search for signs of habitability and of life on Europa are enormous.

“Europa is surely one of the most compelling astrobiological targets in solar system with its apparent saline oceans,” said William Sparks, an astronomer with Space Telescope Science Institute in Baltimore and lead author of a paper on the plumes.

“And now there’s the real possibility that we can explore for organics or even signs of life without drilling into the ice.” In other words, the plumes could allow NASA to collect material once in the oceans of Europa via a flyby, rather than requiring a landing and a subsequent piercing through miles of ice.