About Image
The angrite parent body was likely similar in size to the asteroid Vesta, which has been studied up close by NASA’s Dawn mission. Vesta is roughly 525 kilometers (326 miles) in diameter.NASA/JPL-Caltech/UCLA/MPS/DLR/IDA
Feb. 14, 2018
Research Highlight

Study suggests that volatiles could have been brought to our planet by meteorites during the first two million years of the Solar System.

A new study of a rare basaltic meteorites called angrites suggests that volatiles, which are compounds with relatively low boiling points such as water, could have been brought to our planet by meteorites during the first two million years of the Solar System.

Since components such as water and carbon are essential ingredients to life on Earth, researchers are keen to know when they arrived on our planet.

“We’re looking at as many meteorite parent bodies as possible right now to figure out where they were in the early Solar System and how much water they had,” says Adam Sarafian, a recent doctoral graduate in the department of Earth, Atmospheric, and Planetary science at Massachusetts Institute of Technology. “We’re trying to build a map of the very early inner Solar System. Where was the water, where was it going and where did it come from?”

Sarafian is the lead author of a paper describing the findings of the angrite study in the journal Geochimica and Cosmochimica Acta. 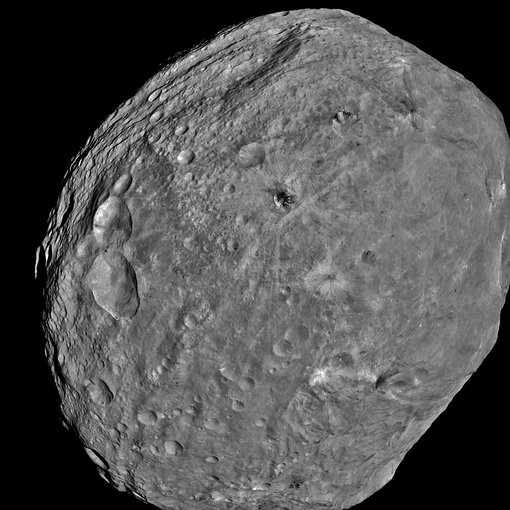 The angrite parent body was likely similar in size to the asteroid Vesta, which has been studied up close by NASA’s Dawn mission. Vesta is roughly 525 kilometers (326 miles) in diameter.Image credit: NASA/JPL-Caltech/UCLA/MPS/DLR/IDA.

The story of water

Angrite meteorites formed in the inner Solar System extremely early, roughly 4.56 billion years ago. At that point, the Earth was likely still just 20 percent of its current size, while Mars, which formed more quickly, was probably close to its current size. Scientists aren’t sure how quickly Mercury and Venus were formed.

During this time, the inner Solar System was a hot and dry place. Protoplanets and asteroids had molten surfaces and, when in magma, even an element such as carbon, which has a boiling point of 4,800 degrees Celsius (8672 degrees Fahrenheit), is considered to be a volatile. It has therefore been unclear when delicate, low-boiling-point elements such as water came aboard, particularly as the hydrogen required to make water molecules would have been boiled away by the high temperatures.

“Was hydrogen basically devoid in these rocks and in the early Inner Solar System?” asked Sarafian.

Sarafian and his colleagues measured a common mineral in basaltic meteorites, called olivine, for the volatile elements hydrogen, carbon, fluorine and chlorine. Since basalt is formed during the cooling of igneous (molten) rock, converting the volatile element content of olivine easily translates to the composition of the basaltic melt.

“Once we know the melt composition, we can then calculate what a planetary body’s water content was,” Sarafian said.

The team discovered that the parent asteroid of angrites likely had about 20 percent of the Earth’s current water content. While the percentage is low by modern terms, this amount of water in the early Solar System indicates that water was fairly abundant 4.56 billion years ago, even when the inner Solar System was still hot. (Researchers have not yet identified the specific asteroid that birthed all angrites, but the search is ongoing.) 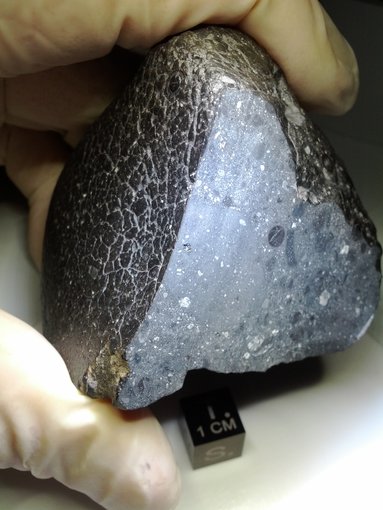 Basaltic meteorites are common in the Solar System. This example from Mars – called North-West Africa (NWA) 7034, nicknamed “Black Beauty” – has a relatively large amount of water in it.Image credit: NASA.

The origin of Earth’s water

Different sources of water in the Solar System are commonly compared to Earth’s water by measuring the ratio of the hydrogen isotope deuterium to hydrogen (D to H). While this specific study did not measure that ratio, a study Sarafian published earlier in 2017 in the journal Philosophical Transactions of the Royal Society A showed that the angrite parent body’s water matches the Earth’s water composition perfectly. This suggests that both the water found in angrites and early Earth’s water came from the same source.

“It’s a fairly simple assumption to say that Earth’s water at least started accreting to Earth extremely early, before the planet was even fully formed,” says Sarafian. “This means that when the planet cooled enough so that liquid water could be stable at the surface, there was already water here.”

By the time Earth was fully-formed 4.54 billion years ago, Mars already had a 20 million year head start as a stable mass with water and other volatiles on its surface, such as carbon, fluorine, and chlorine, adds Sarafian. Other research has shown abundant evidence of water on Mars’ surface in the ancient past, through features including ancient river beds and minerals formed in water, such as hematite.

Sarafian’s team also estimated how big the angrite parent body was, using the water and carbon content found in angrites. Water and carbon content is pressure dependent, so by estimating the pressure the researchers could then deduce the size. The angrite asteroid was likely about as big as the asteroid Vesta, which is roughly 525 kilometers (326 miles) in diameter. Earth is about 25 times larger in diameter than Vesta.