About Image
Extremophiles, such as the thermophiles that give the microbial mats such vivid colors in the hot springs in Yellowstone National Park, are a hot topic of study amongst astrobiologists in the UK.Jim Peaco/National Park Service
Sulfur chemistry was vital for early anaerobic life in the Archean eon, over 2.5 billion years ago.Peter Sawyer/Smithsonian Institution
June 4, 2019
Research Highlight

How Sulfur Helped Make Earth Habitable Before the Rise of Oxygen

Mapping the bonds and vibrational modes of molecules containing sulfur isotopes is helping to shed light on the chemical reactions that took place in Earth’s atmosphere during the Archean era, before the atmosphere became oxygenated about 2.5 billion years ago.

The Archean is a geological eon that lasted from 4 billion years to 2.5 billion years ago. It saw the emergence of the first life on Earth, but these microbes were anaerobic, meaning they did not breath oxygen. In fact, during this time, Earth’s atmosphere did not contain any molecular oxygen. Instead, the atmosphere was rich with the likes of carbon and, particularly, sulfur. 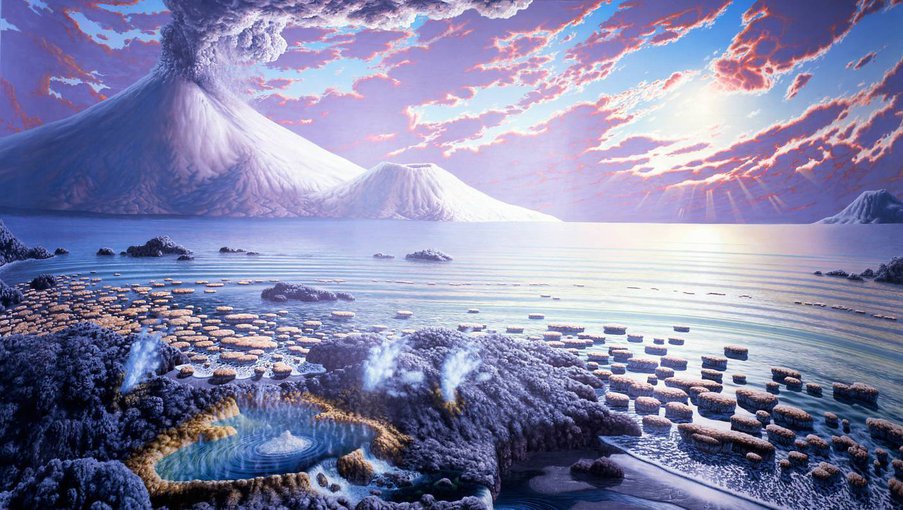 The sulfur in the Archean Earth’s atmosphere was emitted by volcanic activity, and through a process called mass independent fractionation, sulfur’s various isotopes (sulfur atoms containing the same number of protons but different numbers of neutrons) became enriched in a manner that does not correlate with their mass. Evidence that this occurred is found in surface deposits dating back to the Archean, and it was these sulfur isotopes, as part of molecules such as hydrogen sulfide (H2S) and sulfur dioxide (SO2), which microbes metabolized, releasing oxygen in the process and beginning the process of oxygenating Earth’s atmosphere – a development referred to as the Great Oxygenation Event.

Because sulfur is quickly oxidized in an oxygen-rich environment, and then removed from the atmosphere by precipitation and run-off into the ocean, the sulfur chemistry of early Archean life was phased out and lost to time. However, by understanding the mass independent fractionation process, it should be possible to learn more about the atmosphere of the pre-oxygenated Earth and the conditions in which the first life on Earth lived.

The process behind the mass independent fractionation of sulfur remains uncertain, but the two most popular hypotheses are either photolysis (the breaking apart of molecules) by ultraviolet light from the Sun, or reactions between elemental sulfur. “However, the actual phenomenon, reaction or mechanism is still to be identified,” says Dmitri Babikov, a Professor of Physical Chemistry and Molecular Physics at Marquette University in Milwaukee, Wisconsin.

Babikov, along with his Marquette colleagues Igor Gayday and Alexander Teplukhin, have published a new paper in the journal Molecular Physics that explores some of the molecular bonds of a sulfur-4 (S4) molecule, and how these bonds affect the vibrational modes of the molecule, which in turn may influence the mass independent fractionation process.

They identified a second, previously unknown, bond that joins together S2 molecules (containing two sulfur atoms) to form S4. “This second bond holds the molecule tight in a [trapezoid-shaped] arrangement and does not allow easy rotation of the two S2 molecules within S4,” says Babikov. In turn, this arrangement of sulfur atoms then determines how they move as the S4 molecule vibrates. 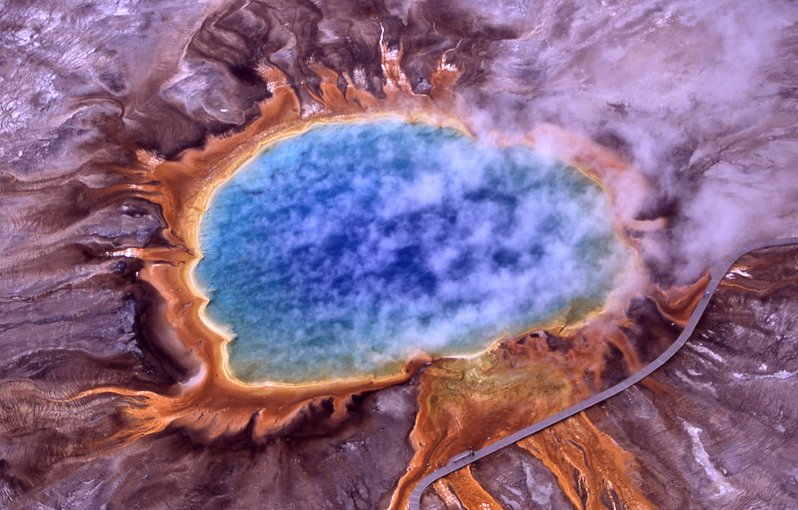 Extremophiles, such as the thermophiles that give the microbial mats such vivid colors in the hot springs in Yellowstone National Park, are a hot topic of study amongst astrobiologists in the UK.Image credit: Jim Peaco/National Park Service.

The vibrational states, or frequencies, of the S4 molecule are determined by both the shape of the molecule’s ‘potential energy surface’, which describes the energy of the isotopes in the trapezoid arrangement of the S4 molecule, and how chemical reactions change the potential energy of that system. Not only do the number of vibrational modes, involving stretching and compression of the bonds between the S2 molecules, have a bearing on the reaction rate, but they could also be sensitive to a given isotope, which could help identify the chemical reaction behind mass independent fractionation. “But at this point this is still a hypothesis,” says Babikov.

A better understanding of the role of mass independent fractionation in the sulfur chemistry of Archean Earth not only gives us a picture of the environment on Earth before oxygenation, but it also tells us about the potential biosignatures a similar environment on an exoplanet could create.

“[Sulfur isotopes] could potentially serve as a signature of the environment that created life on Earth,” says Babikov. However, he says, our current level of telescopic technology means it would be very difficult to determine the isotopic composition of an exoplanet’s atmosphere to the required level of detail.

The study, “Computational analysis of vibrational modes in tetra-sulfur using dimensionally reduced potential energy surface,” was published in the journal Molecular Physics. The work was supported in part by NASA Astrobiology through the Exobiology Program.