About Image
Drill core samples from the Tsumeb mine in the Hüttenberg Formation in north-eastern Namibia. A carbon anomaly found in the samples holds clues as to the early oxygenation of Earth’s oceans.Huan Cui
Sept. 5, 2018
Research Highlight

Did Earth's Oxygen Increased in Gradual Steps Rather than Big Bursts?

A carbon cycle anomalydiscovered in carbonate rocks of the Neoproterozoic Hüttenberg Formation of north-eastern Namibia follows a pattern similar to that found right after the Great Oxygenation Event, hinting at new evidence for how Earth’s atmosphere became fully oxygenated.

By using the Hüttenberg Formation, which formed between a billion and half a billion years ago, to study the time between Earth’s change from an anoxic environment (i.e. one lacking oxygen) to a more hospitable environment that heralded the animal kingdom, a team of researchers led by Dr. Huan Cui of the NASA Astrobiology Institute at the University of Wisconsin–Madison discovered a sustained, high level of carbon. This influx of carbon, coupled with changes in other elements, indicates how changing levels of oceanic oxygen may have lent a helping hand to early animal evolution. 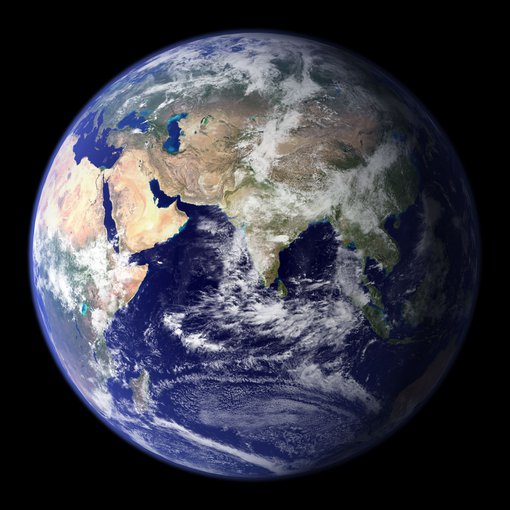 An oxygenated Earth is vital for the evolution of complex life.Image credit: NASA.

The study, published in the journal Precambrian Research, paired new oxygen, sulfur, and strontium isotope data, with carbon isotope data published in 2009, obtained from drill core samples from the Hüttenberg Formation. Together, the data provides further evidence that Earth’s oxygen increased in a stepwise fashion, as opposed to being constrained to two major events capping the Proterozoic (a geological epoch that lasted between 2.5 billion and 541 million years ago). The resulting pattern of changing redox reactions (i.e. reactions involving oxygenation and reduction via the exchange of electrons) was named the Hüttenberg Anomaly, after the rock formation in which it was found.

The University of Maryland’s Dr. Alan J. Kaufman, who is the second author of the study and the lead author of the 2009 carbon isotope study, says that the paired data “suggest that the rise of oxygen was oscillatory through this 50- to 75-million year intervalassociated with the Hüttenberg Anomaly and the Neoproterozoic Oxidation Event or NOE at the end of the Proterozoic.”

The anomaly shows how the carbon isotope ratios (13C/12C) experienced a sustained 12 to 14 parts per thousand increase in abundance for roughly 15 million years before returning to prior low levels. As oxygen levels in the ocean increased, sulfides were converted to sulfates, which some microbes use in their metabolism to digest and recycle organic carbon on the seafloor. The isotopes of oxygen, carbon, and sulfur moved in tandem during the Hüttenberg Anomaly, convincing the scientists that what they were seeing wasn’t just a coincidence.

Although it has long been accepted that high levels of atmospheric oxygen paved the way for animals to populate the Earth, global carbon and oxygen cycles fluctuated wildly during the Proterozoic, between the time when oxygen first accumulated in the atmosphere during the Great Oxygenation Event (GOE) around 2.4 billion years ago, and the time in which they stabilized near to modern levels once animals took the world stage following the NOE, around 500 million years ago. 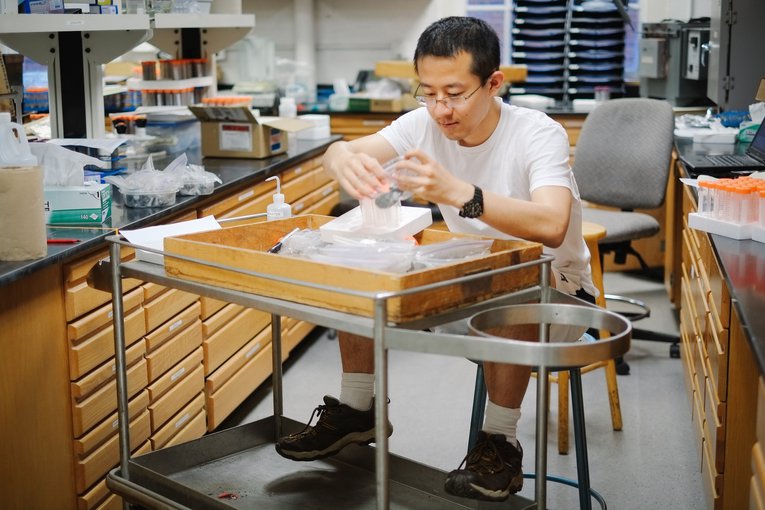 Lead researcher Huan Cui analyzing isotopes in the wet lab at the University of Wisconsin–Madison. Oxygen, carbon, strontium and sulfur isotopes during the Neoproterozoic reveal a step-wise pattern of atmospheric oxygen, crucial to the evolution of compleImage credit: Huan Cui.

During the time between those two events, pulses of unicellular life and variable levels of oxygen in the oceans are thought to have stimulated the evolution of more complex life. These ancient oxygen swings were crucial to the evolution of multicellular life at the Precambrian–Cambrian boundary (541 million years ago; the Cambrian is a geological period that marked the origin and diversification complex animal life on Earth). As pools of oxygenated water grew in the ocean, life was given the opportunity to develop towards a future when oxygen would be at stable and high levels. The Hüttenberg Anomaly represents one such window of opportunity for life.

Kaufman compares the jump in oxygen to another oxygen oasis in time, the Lomagundi event right after the GOE. The Lomagundi event has been described as a false start, when oxygen concentrations rose to levels that could support some life, before decreasing again. It wouldn’t be until the NOE that oxygen would rise to modern-day levels.

“Here’s an isotope anomaly in the Neoproterozoic that is associated broadly in time with the NOE, but which has a rise and fall structure that looks very similar to the GOE,” Kaufman tells Astrobiology Magazine. “At both ends of the Proterozoic Eon there was continental rifting, glaciations, and profound carbon fluctuations; just as the GOE was likely responsible for the evolution of simple eukaryotes, the NOE was involved in the evolution of multicellularity.”

So the GOE ushered in eukaryotes, which are microbes with cells containing a nucleus wrapped by a membrane, and the NOE ushered in even more complex animals. These exceptional events in Earth’s history each harbored an evolutionary test pool that fostered new lifeforms. How exactly the Hüttenberg Anomaly fits into these events or exactly what evolutionary consequence it had still remains to be seen.

During the period between the GOE and the NOE, pockets or bubbles of habitability in a mostly uninhabitable planet would pop up, but these blips on the radar were reversible. Shifting ice sheets or the absence of erosion would decrease elements such as nitrogen and phosphorus required by photosynthesizing life, causing the oxygen and carbon signatures to disappear. The tipping point would appear in the Cambrian Period when the planet was consistently oxygenated. 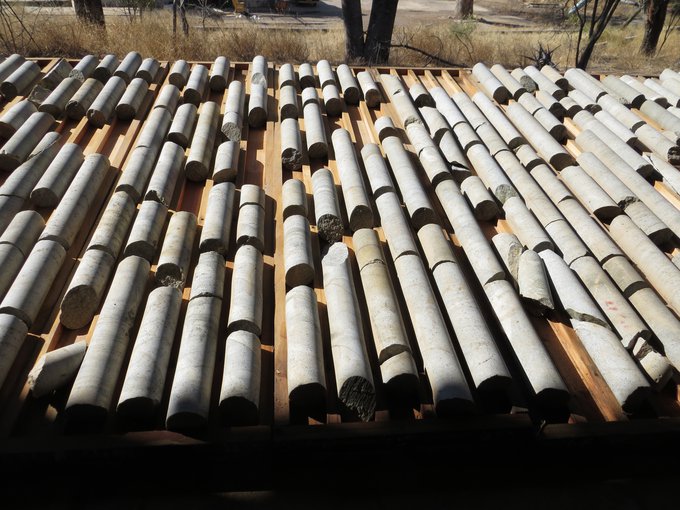 Drill core samples from the Tsumeb mine in the Hüttenberg Formation in north-eastern Namibia. A carbon anomaly found in the samples holds clues as to the early oxygenation of Earth’s oceans.Image credit: Huan Cui.

We see similar effects of anomalies today; in our mostly well-oxygenated atmosphere, there are still oxygen-depleted environments where life struggles to persist or takes an alternative evolutionary pathway: inland seas, underground caves and oceanic dead zones where sulfate- or nitrate-breathers persist while the rest of the world breathes oxygen.

While rocks in other areas of Namibia have been well-studied, the rock strata containing the Hüttenberg Anomaly have been eroded out in many sections, leaving the crucial data piece missing for decades.

Dr. Paul Myrow, a geology professor at Colorado College who was not involved with the study, says that given the time constraints this study provides, more researchers will now take a closer look at other ancient rock formations and re-examine whether this anomaly exists elsewhere on the planet.

Parsing out whether the rise in oxygen was restricted or widespread throughout the ancient ocean or on different ancient continents is something every isotopic study has to take into account.

“One of the ways that we can get that answer is to see if the signal of the Hüttenberg Anomaly can be matched to places around the world,” Myrow, who also studies Precambrian ocean conditions, says. “If there is this shift that took place in different continents at the same time, then we can be more confident about this being global.”

At a time when the planet’s oceanic chemistry, tectonic plates and inhabitants were in such a state of disequilibrium, the Earth’s low-oxygen and unstable atmosphere could be considered wildly dangerous by today’s standards. As the Earth was changing, its teenage awkwardness manifested as smelly, sulfuric pits, hairy living situations, moody shifts in its accommodations, and irreverence towards its co-inhabitants. The Hüttenberg Anomaly is one small step towards the Earth airing out its dirty laundry, cleaning up and becoming presentable for the lifeforms that evolved later.

The study was supported, in part, by NASA Astrobiology through the Exobiology Program.