Two images (Sol 2058 (left); Sol 2084 (right)) of the "Duluth" drill site from the Mast Camera (Mastcam) on NASA's Curiosity rover depict the change in the color of light illuminating the surface since a dust storm engulfed Gale Crater.Image credit: NASA/JPL-Caltech/MSSS.

On the morning of June 19, 2018, what was a local dust storm near the site of the Opportunity Mars Exploration Rover officially became a “planet-encircling” (or “global”) dust event. Because Opportunity relies on solar power, the rover is now in a resting mode to conserve energy. Meanwhile, the Curiosity rover, which runs on a nuclear-powered battery, remains operational.

Dust storms on Mars are a relatively common phenomena, and global dust storms occur roughly every five and a half years (every three martian years). The storms occur when dust is lifted into the air by near-surface winds, and is then circulated through the atmosphere. The storms have caused difficulty for missions in the past because the fine material can affect mechanical and electrical systems. In the future, Mars dust could pose a real threat to human explorers.

Forecasting dust storms on Mars could help ensure the safety of future robotic and human missions. At the 48th International Conference on Environmental Systems, scientists presented a report on the current capabilities of forecasting dust storms on Mars. The study also discusses capabilities that could be available to mission planners and operators in the near future. 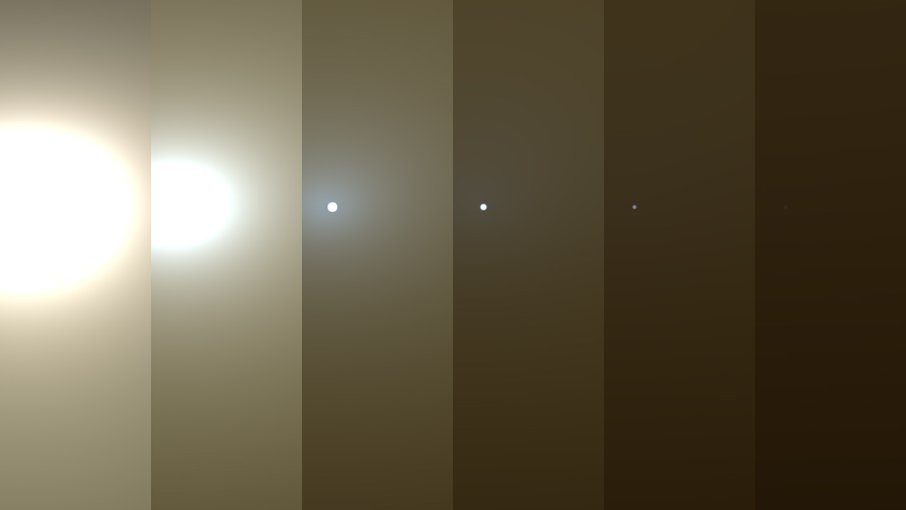 This series of images shows simulated views of a darkening Martian sky blotting out the Sun from NASA’s Opportunity rover’s point of view, with the right side simulating Opportunity’s current view in the global dust storm (June 2018).Image credit: NASA/JPL-Caltech/TAMU.

The study, “On Forecasting Dust Storms on Mars,” was presented at the 48th International Conference on Environmental Systems in Albuquerque, New Mexico. The paper is available in the conference proceedings. The work was supported in part through the Planetary Data Archiving, Restoration, and Tools (PDART) program. The NASA Astrobiology Program provides resources for this and other Research and Analysis programs within the NASA Science Mission Directorate (SMD) that solicit proposals relevant to astrobiology research.