Exposed in a Warm Little Pond

A recent study examines volcanic islands on the ancient Earth as a potential location for Darwin’s ‘warm little pond.’ The origin of life on Earth is a key area of astrobiology research, and numerous theories have been put forward for how it occurred. Many scenarios center around Darwin’s concept of a ‘warm little pond,’ where molecules underwent reactions that led to the formation of prebiotic compounds like amino acids. Over time, these small prebiotic compounds would have undergone further reactions to produce more and more complex molecules. This eventually led to the formation of a molecule capable of information storage, replication, and random mutation. 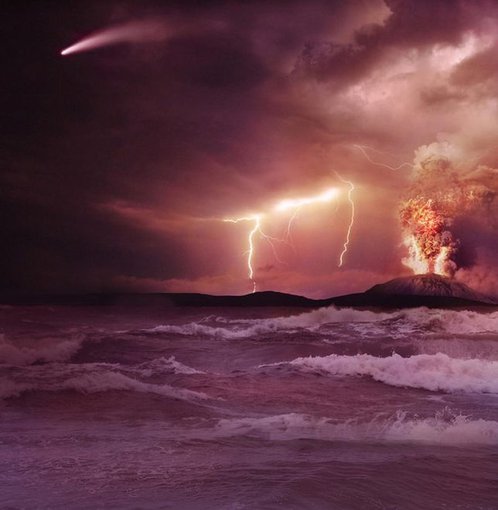 Artist impression of the early Earth, where continental crust was below sea level and the only exposed land was in the form of volcanic islands.Image credit: NASA.

However, the only land exposed above sea level on Earth 3.5 billion years ago was in the form of volcanic islands, similar to the Hawaiian Islands today. The study presents a scenario by which volcanic lightning interacted with gas from the erupting volcanoes to produce small molecules. These molecules then accumulated in warm (or cool) ponds and lakes on the flanks of the volcanoes. Reactions occurred in these bodies of water over time, and possibly through wet-dry cycles. Eventually, as the islands eroded away, the molecules were released into the oceans. The researchers propose that Darwinian evolution then occurred in the oceans, resulting the biochemistry of life as we know it on Earth.

The study, “Exposed Areas Above Sea Level on Earth >3.5 Gyr Ago: Implications for Prebiotic and Primitive Biotic Chemistry,” was published in the journal Life. The work was performed at the NSF/NASA Center for Chemical Evolution (CCE) at the Georgia Institute of Technology in Atlanta, Georgia. The CCE is a collaborative program supported by the National Science Foundation (NSF) and the NASA Astrobiology Program.