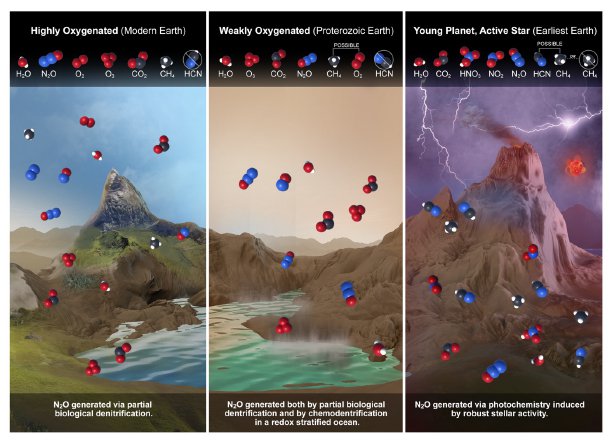 A concept image illustrating the interpretability of N2O as a biosignature given the environmental context.Image credit: Schwieterman et al. (2022), ApJ, 937, 109.

Researchers supported by NASA have used a model to predict the concentration of nitrous oxide (N2O) in the atmosphere of planets over a range of conditions. On Earth, N2O can be released by living organisms. If this gas were to accumulate in a planet’s atmosphere and reach levels that a powerful telescope could detect, it could be a sign that life is present.

The team looked at how N2O concentration is affected by oxygen levels, the type of star that a planet orbits, and fluxes of (N2O) at a planet’s surface due to biology or photochemistry. Based on the predictions of the model, the team generated synthetic transmission and emission spectra (the patterns of light that a telescope might see) to determine whether or not NASA’s Webb Telescope and other future telescopes might be able to detect the gas. They found that large levels of N2O would be needed for Webb to identify it in the atmosphere of a planet like TRAPPIST-1e, yet the high levels are plausible. If the flux of N2O connected to biological activity was twice the modern level of Earth, spectral signatures on an Earth-like planet orbiting a K dwarf star could be comparable to the signal for ozone seen on Earth today.

The presence of N2O in a planet’s atmosphere on its own would not be a definitive sign of life, and would have to be considered in the context of the planet itself. N2O can be generated by processes that do not involve living organisms, but spotting it on a planet with the right conditions for habitability would indicate that researchers should carefully consider the possibility of life on the planet.

The study, “Evaluating the Plausible Range of N2O Biosignatures on Exo-Earths: An Integrated Biogeochemical, Photochemical, and Spectral Modeling Approach,” was published in