Do Intelligent Civilizations Across the Galaxies Self-Destruct? For Better and Worse, We’re the Test Case 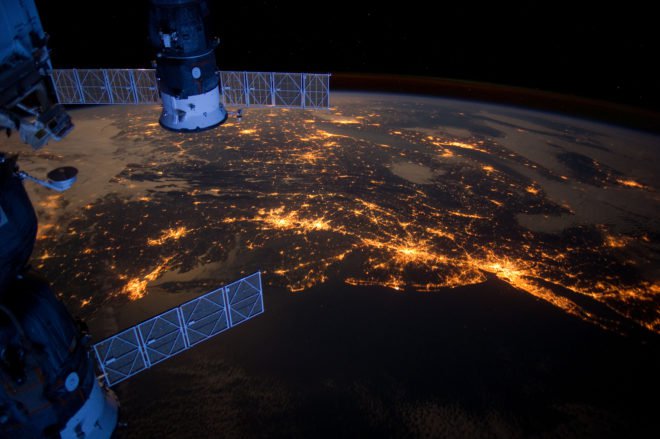 The Eastern Seaboard as seen from the International Space Station in 2012. (NASA)

In 1950, while working at Los Alamos National Laboratory, renowned physicist Enrico Fermi was lunching with colleagues including Edward Teller, Herbert York an Emil Konopinski. The group talked and laughed about a spate of recent UFO reports during the meal, as well as a cartoon about who might be stealing garbage can tops. Was it aliens?

A bit later in the meal Fermi famously asked more seriously, “Where are they?” Sure, there were many bogus reports back then about alien flying saucers, but Fermi was asking what has turned out to be a significant and long-lasting question.

If there are billions of exoplanets out there — as speculated back then but proven now — why have there been no bona fide reports of advanced extraterrestrials visiting Earth, or perhaps leaving behind their handiwork?

Many answers have been offered in the following decades — that we are alone in the universe, that the distances between solar systems are too great to travel, that Earth became home to life early in the galaxy’s history and other planets are only now catching up, that life might be common in the universe but intelligent life is not.

I would like to focus on another response, however, one that came to mind often while reading a new book by the former Astrobiology Chair at the Library of Congress, planetary scientist David Grinspoon.

This potential explanation is among the most unsettling: that intelligent and technologically advanced beings are likely to ultimately destroy themselves. Along with the creativity, the prowess and the gumption, intelligence brings with it an inherent instinct for unsustainable expansion and unintentional self-destruction.

I should say right off that this is not a view shared by Grinspoon. His Earth in Human Hands, in fact, argues with data and conviction that humans are more likely than not to ultimately find ways to work together and avoid looming global threats from climate change, incoming asteroids, depleting the ozone layer, and myriad other potential sources of mass extinction.

But his larger point is the sobering one: that the fate of Earth is, indeed, in our hands. We humans are a force shaping the planet that is as powerful as a ring of volcanoes, a giant impactor from space, the long-ago rise of lifeforms that could, and did, dramatically change our atmosphere and, along the way, caused near global extinction.

It may sound odd, but, as he sees it, we are now the planet’s most powerful and consequential force of nature.