David Grinspoon, astrobiologist and first Baruch S. Blumberg NASA/Library of Congress Chair in Astrobiology, has published a new book. Earth in Human Hands: Shaping Our Planet’s Future, which covers Earth’s history and emergence as a habitable planet and the accelerated changes to Earth introduced by humans. In the trailer for his book, Grinspoon addresses our relationship to our planet and how we can develop a vision for the world we want to create in the future.

From the publisher, Hachette Book Group:
“For the first time in Earth’s history, our planet is experiencing a confluence of rapidly accelerating changes prompted by one species: humans. Climate change is only the most visible of the modifications we’ve made—up until this point, inadvertently—to the planet. And our current behavior threatens not only our own future but that of countless other creatures. By comparing Earth’s story to those of other planets, astrobiologist David Grinspoon shows what a strange and novel development it is for a species to evolve to build machines, and ultimately, global societies with world-shaping influence. Without minimizing the challenges of the next century, Grinspoon suggests that our present moment is not only one of peril, but also great potential, especially when viewed from a 10,000-year perspective. Our species has surmounted the threat of extinction before, thanks to our innate ingenuity and ability to adapt, and there’s every reason to believe we can do so again.”

Details about David Grinspoon’s book tour are posted on the the Earth in Human Hands Facebook page: https://www.facebook.com/earthinhumanhands/ 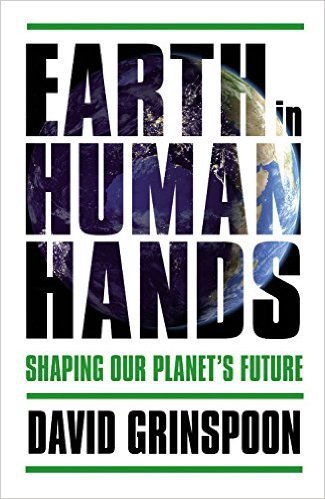