Cooperation between RNA and Proto-Proteins

A recent study supported in part by the NASA&nbspAstrobiology Program has shown that proto-peptides can interact directly with RNA in a way that helps stabilize both types of molecules.

The study has implications for an important question regarding the origin of life as we know it: what came first, proteins or RNA (Ribonucleic acid)? Both molecules are essential in living organisms, and their activities in cells are intricately tied together. Rather than one molecule appearing before the other on the early Earth, the new research shows that RNA and proteins might have evolved together.

One of the most important jobs of RNA (Ribonucleic acid) in cells is to convert the information stored in DNA (deoxyribonucleic acid) into proteins that are synthesized in the ribosome. The ribosome, a machinery made from RNA and protein, makes protein. Conversely, RNA itself is constructed with the help of a molecule called RNA polymerase, which is made of protein. This interaction in modern cells raises important questions about which molecule, RNA or protein, came first. Astrobiologists often refer to this as a ‘chicken or the egg’ problem in origin of life studies.

The ‘RNA World,’ is one attempt to solve this dilemma. In this model, RNA arose before protein and served as both the genetic polymer and as an enzyme. This early RNA would have self-replicated without the use of protein enzymes. Over time, RNA activity led to reactions that began to produce proteins, ultimately leading to the evolution of life’s current complex system of DNA, RNA, and proteins.

Schematic illustration of molecular cooperation between proto-peptides and RNA that could have fostered their co-evolution.Image credit: Moran Frenkel-Pinter et al./GaTech.

RNA is part of a class of molecules known as nucleic acids, a class that also includes DNA. These large molecules are made from smaller pieces called nucleotides, which are linked together to form long chains. Nucleic acids carry the genetic information that makes life as we know it possible, and these molecules are extremely essential in all living cells.

Similarly, proteins are long chains of small molecules called amino acids, which are attached to one another by peptide bonds. These long chains fold in on themselves into three-dimensional structures, which affect how the proteins function inside cells. In living cells, protein is the major polymer that harbors catalytic functions to catalyze (speed up) chemical reactions, and protein is crucial in building structural scaffold components of cells.

Chains of amino acids that are too short to be full proteins (between two and fifty amino acids) are known generally as ‘peptides.’ The new study examines what astrobiologists refer to as ‘proto-peptides.’ These are oligomers that may have formed through linkages between chemical components that were available on the early Earth, using mixtures of amino acids and similar building blocks. These proto-peptides could have been involved in the transition from prebiotic chemistry to biology.

The research team showed in previous work that proto-peptides can form under conditions expected to be present on the early Earth. In the new study, published in the journal Nature Communications, the team found that some of these proto-peptides can interact directly with RNA, and this interaction helps stabilize both molecules. The findings support the theory that nucleic acids and peptides co-evolved, which calls part of the basis for the ‘RNA World’ into question.

According to the study, the findings “support a model in which tightly-intertwined biological dependencies of RNA and protein reflect a long co-evolutionary history that began with rudimentary, mutually-stabilizing interactions at early stages of polypeptide and nucleic acid co-existence.”

This means that both the ‘chicken’ and the ‘egg’ in origin of life studies could have actually originated together, and it wasn’t necessary for either to come first. Instead of an ‘RNA World’ on the early Earth, this co-evolution between nucleic acids and proteins would have led to a “Ribonucleoprotein World.” The recent paper provides experimental support for this idea, outlining specific mechanisms that would have made this co-evolution possible. 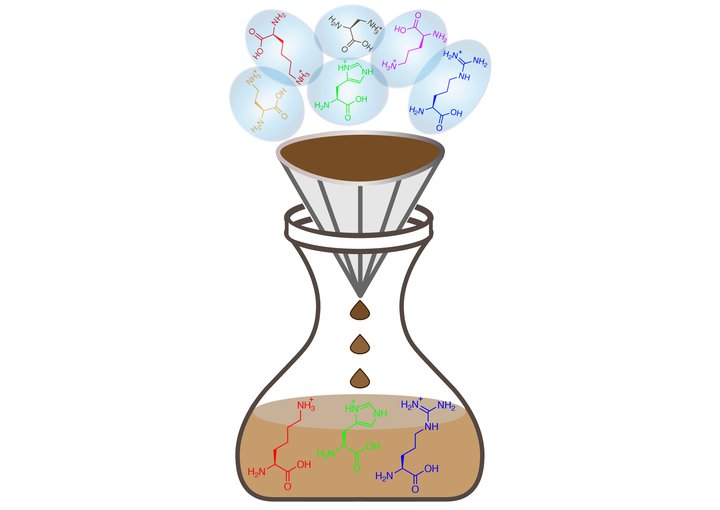 A study finds that nature chose which amino acids to incorporate into proteins by their tendency to cooperate with nucleic acids.Image credit: Moran Frenkel-Pinter et al./GaTech.

“The basic premise of the project was that biopolymer evolution should be considered in terms of co-evolution, rather than thinking about a given type of biopolymer in isolation, and we set out to test this hypothesis experimentally,” said lead author, Dr. Moran Frenkel-Pinter, NASA postdoctoral fellow with the NSF/NASA Center for Chemical Evolution (CCE) at the Georgia Institute of Technology. “Our study supports a model in which the evolution of RNA and proteins was intimately connected from the very beginning (a Ribonucleoprotein World).”

According to co-author Dr. Loren Williams, director of the NASA&nbspCenter for the Origins of Life and co-lead of the Prebiotic Chemistry and Early Earth Environments (PCE3) Consortium, a Research Coordination Network (RCN) of the NASA Astrobiology Program, “The results resolve the chicken and egg dilemma without requiring a specific chronology in polymer origins. We think biopolymers were selected together, via co-evolution. As with acacia ants and acacia plants, co-evolution is common in the biological world and can help us understand the origins of biopolymers.”

A blog post concerning details of this work is available from lead author Moran Frenkel-Pinter, and was selected as the editor’s choice article for the journal Nature’s Organic Chemistry and Chemical Biology page.

The study, “Mutually stabilizing interactions between proto-peptides and RNA,” was published in Nature Communications. The work was performed at the NSF/NASA Center for Chemical Evolution (CCE) at the Georgia Institute of Technology in Atlanta, Georgia. The CCE is a collaborative program supported by the National Science Foundation (NSF) and the NASA Astrobiology Program

This work was supported via the NASA Postdoctoral Program. If you are interested in a postdoctoral fellowship with a NASA Astrobiology Program researcher, please see https://astrobiology.nasa.gov/nasa-astrobiology-postdoctoral-program/

Related:
NASA Astrobiology Postdoctoral Program
Forget the chicken or the egg: It doesn’t matter if RNA or proteins came first, rather that they need each other (Nature)