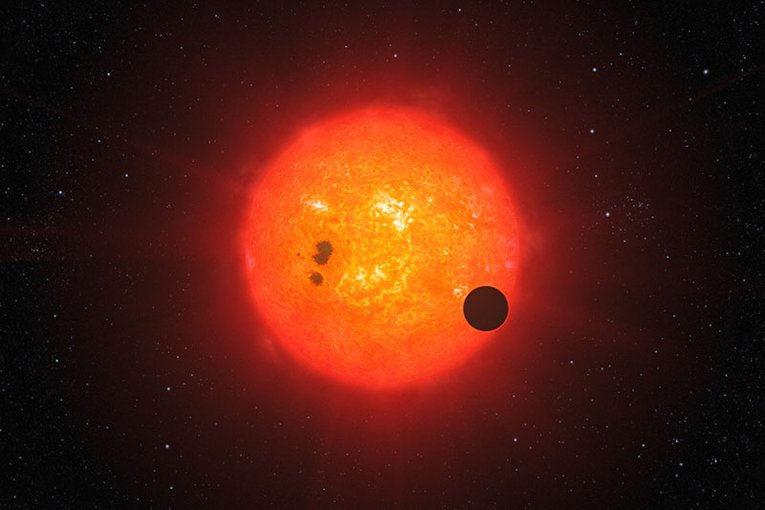 Illustration of a transiting exoplanet similar to GJ1214b. GJ1214b was discovered by the MEarth project and investigated further by the HARPS spectrograph on the European Southern Observatory's (ESO’s) 3.6-metre telescope at La Silla Observatory in Chile.Image credit: ESO/L. Calçada.

Researchers supported in part by the NASA Astrobiology program have reported gray gas general circulation model (GCM) simulations of a tidally locked sub-Neptune planet. Gliese 1214b (GJ 1214b) was discovered in 2009 orbiting the star Gliese 1214, and is located roughly 48 light-years from the Sun. Because GJ 1214b is relatively nearby and transits its star, the planet has been a target for atmospheric studies.

Results of the new study agree with previous work that was performed on timescales of 1000-10,000 Earth days. However, when the timescales of the simulation were increased (50,000 – 250,000 Earth days), significant differences arose in atmospheric circulation and atmospheric features. The authors suggest that previous studies of tidally-locked exoplanets may need to be revisited, taking convergence time into consideration.

Developing and refining techniques for studying the atmospheres of distant planets is important for astrobiologists because certain traits of a planet’s atmosphere could serve as biosignatures for life as we know it.

The study, “Extremely Long Convergence Times in a 3D GCM Simulation of the Sub-Neptune Gliese 1214b” was published in The Astrophysical Journal. The work was supported through NASA’s Habitable Worlds Program and the Nexus for Exoplanet System Science (NExSS). The NASA Astrobiology Program provides resources for Habitable Worlds and other Research and Analysis programs within the NASA Science Mission Directorate (SMD) that solicit proposals relevant to astrobiology research.  NExSS is a NASA  research coordination network supported in part by the  NASA Astrobiology Program. This program element is shared between NASA’s Planetary Science Division (PSD) and the Astrophysics Division. This research is a critical part of NASA’s work to understand the Universe, advance human exploration, and inspire the next generation. As NASA’s Artemis program moves forward with human exploration of the Moon, the search for life on other worlds remains a top priority for the agency.