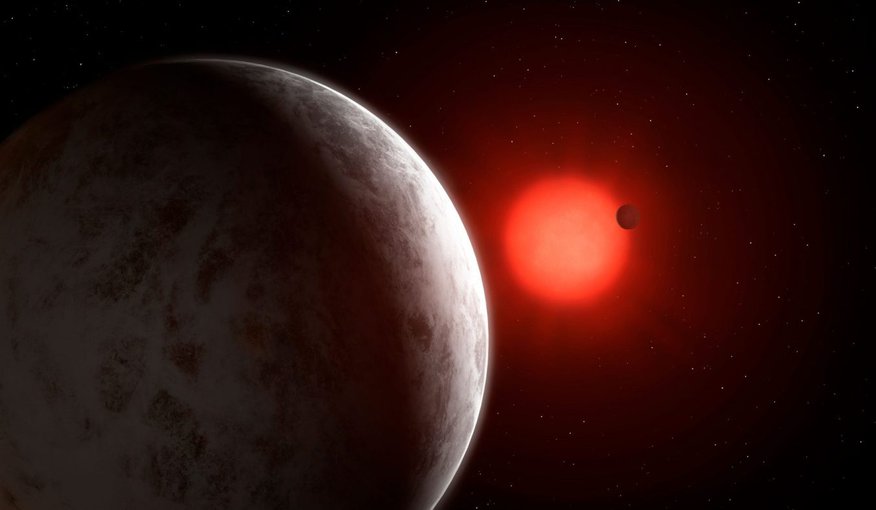 From the perspective of planet hunters and planet characterizers, a desirable solar system to explore is one that is close to ours, that has a planet (or planets) in the star’s habitable zone, and has a host star that is relatively quiet. This is especially important with the very common red dwarf stars, which are far less luminous than stars such as our sun but tend to send out many more powerful — and potentially planet sterilizing — solar flares.

The prolific members of the mostly European and Chilean Red Dots astronomy team believe they have found such a system about 11 light years away from us. The system — GJ 887 — has an unusually quiet red dwarf host, has two planets for sure and another likely that orbits at a life-friendly 50-day orbit. It is the 12th closest planetary system to our sun.

It is that potential third planet, which has shown up in some observations but not others, that would be of great interest. Because it is so (relatively) close to Earth, it would be a planet where the chemical and thermal make-up of its atmosphere would likely be possible to measure.

The Red Dots team — which was responsible for the first detection of a planet orbiting Proxima Centauri and also Barnard’s star — describes the system in an article in the journal Science. Team leader Sandra Jeffers of Goettingen University in Germany said in an email that GJ 887 “will be an ideal target because it is such a quiet star — no starspots or energetic outbursts or flares.”

In an accompanying Perspective article in Science, Melvyn Davies of Lund University in Sweden wrote that “If further observations confirm the presence of the third planet in the habitable zone, then GJ 887 could become one of the most studied planetary systems in the solar neighborhood.” 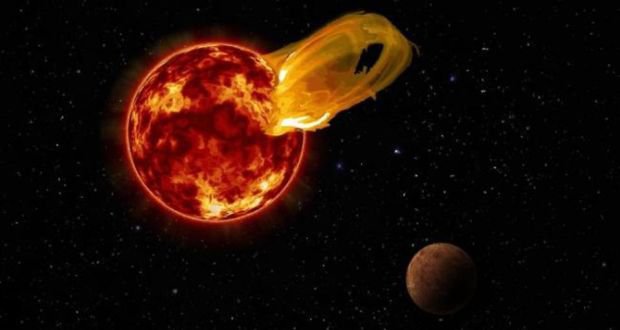 An artist’s impression of a flaring red dwarf star and a nearby planet. Red dwarfs are by far the most common stars in the sky, and most have planetary systems. But scientists are unsure if they can support a habitable planet because many send out more large and powerful flares than other types of stars, especially at the beginnings of their solar lives.Image credit: Roberto Molar Candanosa/Carnegie/NASA.

GJ 877 is roughly half as massive as our sun — large for its type of star — and is the brightest red dwarf in the sky. It was observed each night for three months using the European Southern Observatory’s HARPS spectrograph in La Silla, Chile.

That data, combined with archival data from colleagues going back 20 years, confirmed the presence of two orbiting super-Earths sized planets, i.e., planets which have a mass greater than the Earth’s but substantially below those of our local ice giants Uranus and Neptune.

These two confirmed planets, however, orbit quite close to the star and so would be expected to be far too hot to support life.

But that suspected third planet orbiting in about 50 days is far enough out to be in the star’s habitable zone — at a distance from its host star where water on its surface would be liquid (as opposed to frozen water or water vapor) for some of the time. This is one of the key indicators of planetary habitability, though is certainly not the only one.

This is how the detections occurred, as explained by Jeffers in an email:

“With exoplanet hunting it’s very easy to detect a signal but not so easy to actually determine where the signal is coming from. We’ve been looking at GJ 887 for nearly 20 years with the aim to detect its planets. When we analyzed the data again in 2017 we saw indications that there were planetary signals in GJ 887, however we weren’t 100% certain they came from the planets.”

“With the 50 day signal we only saw this once during the 80-90 nights so we need to go back and look again at GJ887 over at least 60 nights to confirm or refute this signal.” 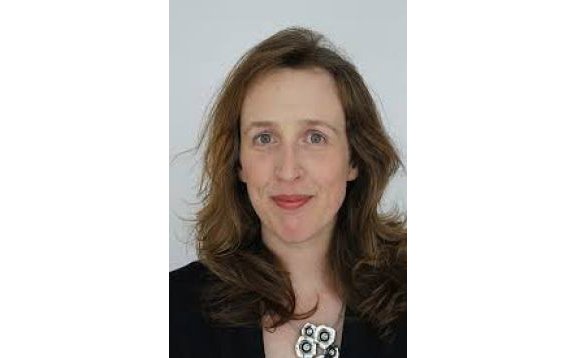 One of the most attractive features of GJ 887 is that it’s a red dwarf has very few starspots and flares. If GJ 887 was as active as our sun, it is likely that a strong, outflowing stellar wind would simply sweep away the planets’ atmospheres. With those starspots and flares absent, the newly discovered planets around GJ 887 have a better chance of keeping their atmospheres and potentially hosting life.

The other interesting feature the team discovered is that the brightness of GJ887 is almost constant. This makes it relatively easy to detect the atmospheres of planets in system, making it a prime target for the long awaited James Webb Space Telescope, scheduled to launch next year. Unlike almost all current space and ground telescopes, JWST will be able to directly image exoplanets rather than identifying and studying them indirectly through the effect of exoplanets on a host star. Scientists using direct imaging technology can far more effectively characterize exoplanet atmospheres. 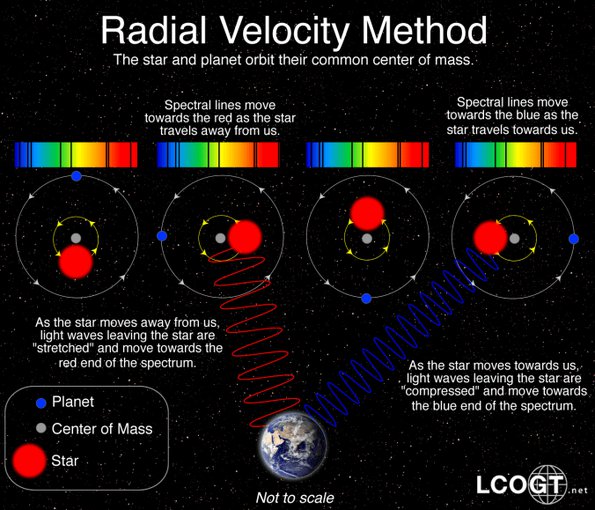 If a third planet in a habitable zone is confirmed, then GJ 887 will likely join the ranks of TRAPPIST-1 as a planetary system of great interest to astronomers and those looking for life beyond Earth. Three Earth-sized rocky planets were identified orbiting TRAPPIST-1 in 2015 and four more terrestrial planets have since been found — making it a prime target for scientists.

The Red Dot team began with Guillem Anglada-Escudé of the Queen Mary University of London, Sandra Jeffers and others. Originally called the “Pale Red Dot” team, their initial focus was on Proxima Centauri, the star closest to our solar system. The name is a nod to the “Pale Blue Dot,” a photograph of planet Earth taken on in 1990, by the Voyager 1 space probe from a record distance of 3.7 billion miles.

In 2016 the team was the first to identify a planet orbiting Proxima (also a red dwarf) and two years later they played a central role in the discovery a planet orbiting Barnard’s Star, another of those closest stars to Earth. Today’s Red Dot campaigns are supported by the European Southern Observatory and universities in Chile, the United Kingdom, Spain and Germany.

Jeffers said that a large group of astronomers join to write proposals for Red Dot telescope time, and that from this group there is a core team of ten to fifteen people who do most of the observing and data analysis. Another ten scientists join in writing the papers when they can contribute.

Jeffers said that the group has observed in a third Red Dots campaign and that “we would have been taking data for Red Dots #4 if it wasn’t for the Covid-19 fallout. “