About Image
The first episode in a new NASA Astrobiology documentary series, all about amazing field sites and the scientists who explore them.Mike Toillion
April 1, 2019
Feature Story

The NASA Astrobiology Program is proud to announce the first episode of a brand new video documentary series, Astrobiology in the Field: Iceland!

In the summer of 2018, I had the pleasure of traveling to Iceland to accompany a fascinating, scientific expedition team, known as FELDSPAR: the Field Exploration and Life Detection Sampling for Planetary and Astrobiology Research. Led by Georgia Institute of Technology’s Dr. Amanda Stockton, and funded by the NASA Astrobiology’s PSTAR program, team FELDSPAR is investigating the distribution of life amongst fresh lava fields in the volcanically active regions of Iceland. 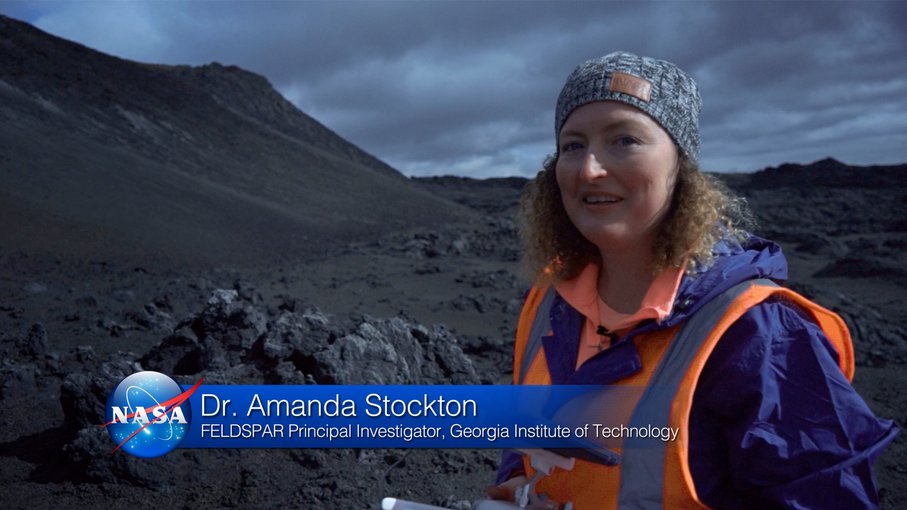 This expedition is the first installment in a brand new NASA Astrobiology video documentary series, entitled Astrobiology in the Field. This series aims to showcase the amazing analogue environments and the interesting field work being conducted all over the world by NASA scientists; work that directly informs NASA missions to discover extraterrestrial life in the Universe.

Team FELDSPAR’s field expeditions are very challenging endeavors, and documenting that journey proved equally challenging. Every sampling mission begins in Akureyri, Iceland, the team’s home base. About half of the team will spend their time in the labs of the University of Akureyri conducting experiments on the samples gathered by the team’s previous sampling runs. The rest of the team will load up an off-road, snorkel-equipped Landcruiser with scientific instruments, sampling gear, and other supplies and begin the six hour-long journey to Holuhraun, a lava field just north of the Vatnajökull ice cap.

Crossing the second river during the journey from Akureyri to the field site. Image by Mike Toillion.
Driving between the forces of a melting glacier and a still-cooling volcano, bouncing around in the cab of a Landcruiser, and chasing the action from the air is one of the biggest highlights of my career.
Mike ToillionNASA Astrobiology Program

As the official filmmaker of the mission, I was given the front passenger seat, an immense privilege that became quite evident once we hit the relentlessly bumpy, dirt roads of eastern Iceland. The scenery, however, was breathtaking. Rivers, mountains, volcanoes, lava fields, and ice shelves; nature’s chaos and harmony playing tug-of-war in all directions. From my coveted seat, I piloted my aerial drone to circle our vehicle as it crossed no less than three rivers, nervously watching as the water level rose up to the window, splashing my two GoPro cameras mounted to the Landcruiser. Even so, none of the cameras were able to capture the huge smile on my face.

In the late afternoon, we arrived at the field campsite: two modest wooden structures without running water or electricity, none of which fazed any member of the team. A lack of electricity meant that I needed to follow a strict plan for each camera’s battery over the next two days, because recharging would be very limited. After a quick dinner cooked over a camping stove, we all turned in for the night, shuttering every window of the building by locking wooden covers to block out the ever-present sunlight, a strange reality of summers on the edge of the Arctic Circle.

At 4am in the morning, it was time to get up and get moving to the field site.

Holuhraun erupted on September 4th, 2014, spreading lava for more than 85 square kilometers over the following six months. Over time, that lava cooled and hardened, providing an excellent analogue for other volcanic environments, namely Mars. Whatever biology inhabited the region was erased by the eruption, but it wouldn’t take long for life to creep back in. This event created an opportunity for Dr. Stockton and her team to study how the probability of detecting life in a seemingly uninhabited area could be distributed geographically; a dataset that would be crucial for deciding where to send multi-billion dollar missions to conduct the search for life on other worlds.

Team FELDSPAR hiking through the lava field of Holuhraun to the main cinder cone. Image by Mike Toillion.

In her studies of this region of Iceland, Dr. Stockton mimics the same procedures NASA uses to understand Mars. It begins with satellite reconnaissance, where Google Earth takes the place of the Mars Reconnaissance Orbiter (MRO). This level of data is comparable to a resolution of 1 pixel equaling about 1 square kilometer. The next level of detail is obtained from automated aerial drone mapping, where hundreds of high-resolution photos are stitched together to create a 3D map of the field site. All of which is used to determine where the sampling team goes to work. 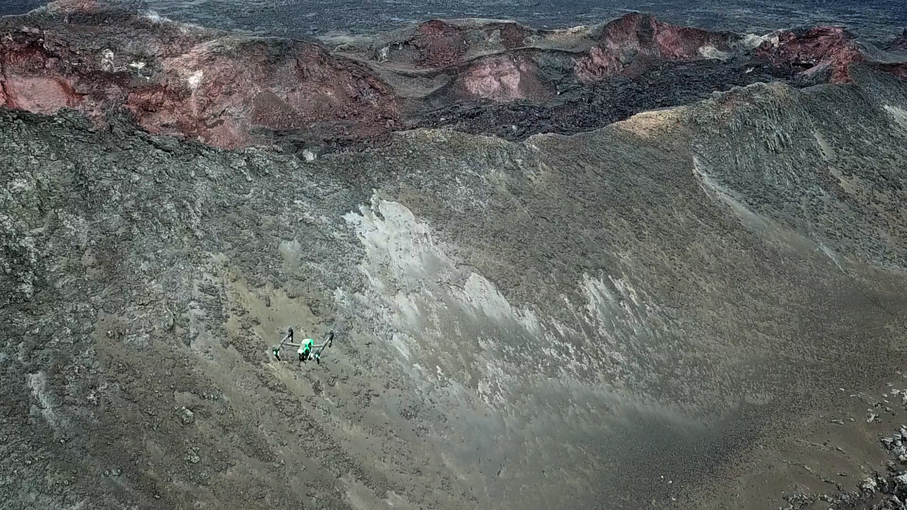 After popping a fresh battery into my aerial drone, I tapped into decades of video game experience and trailed in the wake of team FELDSPAR’s drone to capture its flight. Even with its bright green visage, the FELDSPAR drone was incredibly difficult to track, and I had to resort to my own line-of-sight coupled with Dr. Stockton’s altitude readings to approximate which direction to point my drone’s camera. My worries fluctuated between trying to get the shots I needed and trying not to crash into a NASA scientific instrument!

After the region was fully mapped, the sampling team distributed flags across the site to achieve a dataset that properly represented the area. The team took a number of precautions to prevent contaminating the area with their own microbial data, including wearing protective gear and walking in specific single-file lines throughout the site. At the conclusion of the expedition, the team raked over their tracks to preserve the site; the fewer tracks, the easier the cleanup.

I followed their lines, gingerly tip-toeing around the scientists with my camcorder in order to capture both their sampling and in-situ measurements. Every instrument used by the team is also present on either the Curiosity rover (Mars Science Laboratory) or MRO.

During all of this activity, a sleeping giant was slowly awakening: the Dyngjujökull glacier. The impetus for waking up at 4am was to get to the field site and conduct all the necessary sampling before the glacier melted and flooded our only exit. On this particularly sunny day, we returned to the Landcruiser at 1pm to see our only exit completely submerged in glacier runoff water. Amanda Stockton simply grinned and asked our driver for the keys, and I then realized why she had recommended I save some drone battery for the drive back.

Driving across the Dyngjujökull glacier melt to return to the campsite. Image by Mike Toillion.

With Amanda behind the wheel and myself back in the front passenger seat, the Landcruiser began to plow through the flooded landscape, throwing water left and right. My thumbs pushed the remote control’s joysticks to the edge, accelerating the drone to its full speed of 40 miles per hour. Even at top speed, the drone struggled to keep up in its pursuit. Driving between the forces of a melting glacier and a still-cooling volcano, bouncing around in the cab of a Landcruiser, and chasing the action from the air is one of the biggest highlights of my career.

Dr. Amanda Stockton steering the Landcruiser through the flooded entrance to the field site. Image by Mike Toillion.

The expedition returned to Akureyri, and the team spent the next few days conducting more in-depth experiments on their samples. These samples were then shipped to their home lab at the Georgia Institute of Technology for further analysis, such as DNA extraction, a process best explained by the scientists in the full video.

Dr. Gayathri Mureksesan working in the lab at the University of Akureyri. Image by Mike Toillion.

As for me, I returned to Boulder, Colorado, and began to pull together the story of our trip. 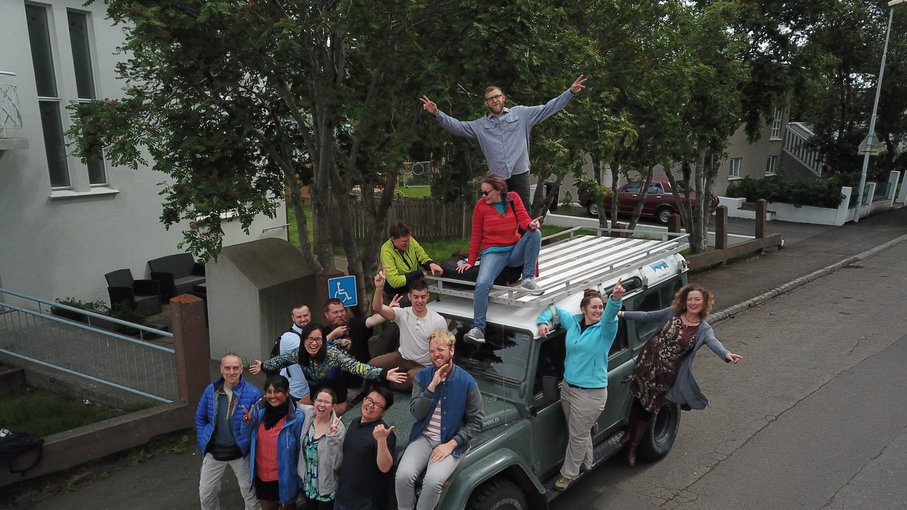 Accompanying Dr. Amanda Stockton and Team FELDSPAR to Iceland was an amazing experience, and has made one of my career-long dreams come true. I want to thank them all for their fantastic support of this project, including George Tan’s amazing team dinners, Morgan Cable’s round of drinks while we watched the World Cup, and Sam Holtzen’s group trip to the geothermal hot springs on our day off.

You can watch the full episode of Astrobiology in the Field: Iceland on the NASA Astrobiology YouTube channel. I hope you enjoy it.

Mike Toillion, producer and director of the Astrobiology in the Field series.

Is your NASA-funded team conducting fieldwork in 2019?

Would you like to participate in the next episode? NASA Astrobiology is looking for the next team to highlight in our Astrobiology in the Field series! If your team is selected, I will accompany your team to your field site and produce a short documentary for the NASA Astrobiology Program. All additional expenses associated with documenting your expedition will be covered.

If your team is looking to conduct field work in the next year and would like to participate in this series, please contact me here: mike.toillion@nasa.gov.