June 30th has been designated “Asteroid Day” to promote awareness of these small members of our solar system. But while asteroids are often discussed in the context of the risk they might pose to the Earth, their chewed up remains around other stars may also reveal the fate of our solar system.

It is 6.5 billion years into our future. The sun has fused hydrogen into a core of heavier helium. Compressed by its own gravity, the helium core releases heat and the sun begins to swell. It is the end of our star’s life, but what will happen to the solar system? 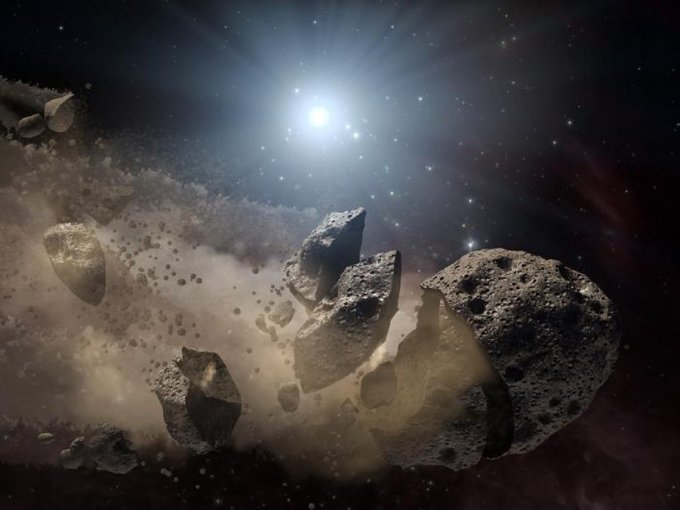 While very massive stars end their element-fusing days in a colossal explosion known as a supernovae, the majority of stars in our galaxy will take a less dramatic exit.

Our sun’s helium core will fuse to form carbon but there is not enough mass to achieve the crushing compression needed for the creation of heavier elements. Instead, the outer layers of the dying star will be blown away to leave a dense remnant with half the mass of our current sun, but squeezed down to the size of the Earth. This is a white dwarf; the most common of all stellar ends.

The life cycle of our sun.Image credit: Many Worlds.

The white dwarf rapidly cools to become a dim twinkle in the sky. Within a few million years, our white dwarf will be less luminous that the sun today. Within 100 million years, it will be dimmer by a factor of 100. But examination of white dwarfs in our galaxy reveals this gentle dimming of the lights is not as peaceful as first appears.

The remnants of stars too light to fuse carbon, white dwarfs have atmospheres that should be thin shells of residue hydrogen and helium. Instead, observations have detected 20 different heavy elements in this envelope of gases that include rock-forming elements such as silicon and iron and volatiles such as carbon and nitrogen.

Infrared observations of over forty white dwarfs have additionally revealed compact dusty discs circling the dead stars. Sitting within the radius of a regular star, these could not have formed before the star shrank into a white dwarf. These must be the remains of what occurred as the star morphed from a regular fusion burner into a white dwarf.

This grizzly tale begins with the star’s expansion. Inflated by the heat from the helium core, our sun will increase to 230 times its current size. The outer layers will cool to emit a red hue that earns this bloated dying star the name “red giant”.

The outer layers of our red giant will sweep outwards and engulf Mercury and Venus, possibly stopping just short of the Earth’s position. But for any life remaining on our planet’s surface, the difference between envelopment and near-envelopment is rather moot.

The sun’s luminosity will peak at about 4000 times its current value, roasting Mars and triggering a whole new set of chemical reactions in Jupiter’s huge atmosphere. As the outer layers blow away and the red giant shrinks in mass, the surviving planets will drift outwards onto longer orbits, circling the white dwarf remnant at around twice their current distance from the sun. 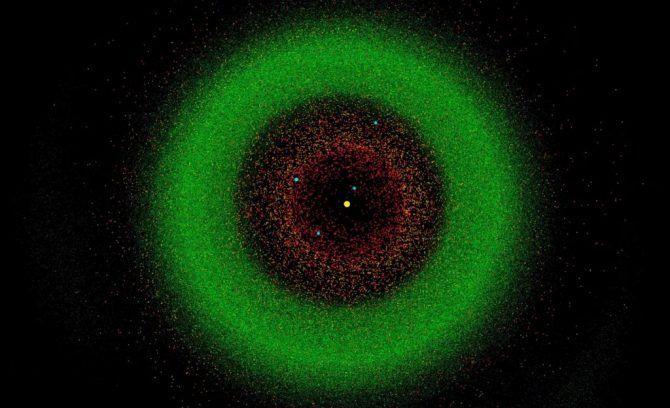 The asteroids in our solar system discovered between 1980 – 2015.Image credit: Scott Manley.

Sitting between Mars and Jupiter, the asteroid belt is a band of rocky rubble left over from the planet formation process.

Occasionally, a kick from Jupiter’s gravity can send these space rocks skittering towards the Earth. These become known as “Near-Earth Objects” (NEOs) and are studied both for the potential threat to our planet should they collide, and also for their scientific value as time capsules from the earliest stages of planet formation.

At the moment, two missions are en-route to bring a sample from two different asteroids back to Earth. Japan’s Hayabusa2 mission has just arrived at asteroid Ryugu, returning stunning images of the asteroid to Earth. The NASAOSIRIS-REx mission is traveling to asteroid Bennu, and will arrive later this year.

But sitting further out than Mars, should not the majority of these small celestial bodies be unaffected by the sun’s demise? The problem turns out to be radiation.

Walk outside on a sunny afternoon and you are likely to notice that the ground beneath your feet is hottest at around 2pm in the afternoon, several hours after the sun has moved from directly overhead. This is because it takes time for the pavement to warm and re-emit the solar radiation as heat.

During that time, the Earth has rotated so that this heat radiation is released in a different direction to the absorbed radiation. Like catching a ball and throwing it away at an angle, this difference in direction gives the planet a small kick.

This kick is too small to make a difference to the Earth, but it can have a much more significant result on the evolution of an asteroid. The result is known as the YORP effect (standing for the Yarkovsky-O’Keefe-Radviesvki-Paddock effect, after the mouthful of researchers who developed the theory) and the related phenomenon named after the same first researcher, the Yarkovsky effect. Stemming from the push due to the uneven absorption and emission of radiation, the YORP effect causes a turning torque on asymmetric bodies while the Yarkovsky effect results in a push. 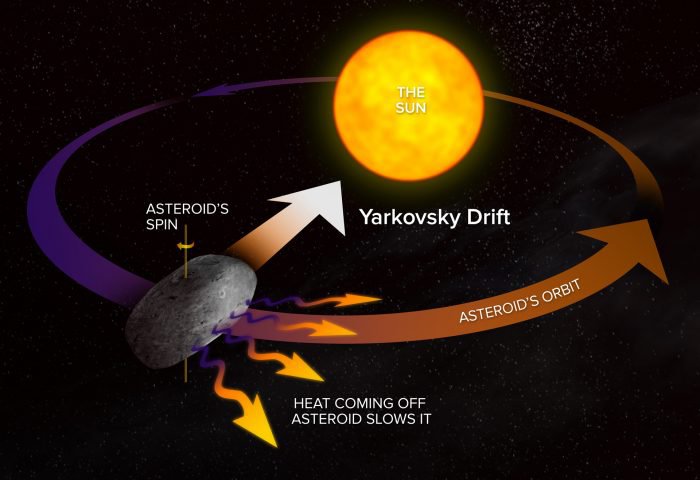 The Yarkovsky Effect describes how outgoing infrared radiation on an asteroid can speed up or slow down its motion, and in time change its orbit.Image credit: A. Angelich, NRAO/AUI/NSF.

As radiation absorption and emission depends on the individual asteroid’s composition and topology, these forces are immensely hard to predict. This point was driven home in February 2013, when the world was primed for the close approach of asteroid Duende.

While everyone watched the sky in one direction, a second asteroid shot towards the Earth and exploded above Russia. This was the Chelyabinsk meteorite whose collisional path had not been anticipated. Studying the changes in an asteroid’s path due to radiation is therefore one of the primary goals of the OSIRIS-REx mission.

Given these challenges at the sun’s current level of radiation, it perhaps is not surprising that the red giant phase has more violent consequences.

Too small for gravity to pull them into a sphere, asteroids are typically lumpy rocks resembling potatoes or dumplings, like the rocky destination of Hayabusa2 and its predecessor which visited asteroid Itokawa. This asymmetry causes differences in the radiative force across the asteroid and creates a torque. This is the YORP effect and it spins the asteroid. As these small bodies typically have a weak tensile strength, the asteroid can self-destruct by spinning itself to pieces.

This effect is seen in our solar system as there is a sharp cut-off in the population for asteroids around 250m in size with rotation periods shorter than 2.33 hours.

As the radiation from our swollen red giant beats down on the asteroid belt, these space rocks will start to spin and fission. The pieces will form a disc of dust around the dying star as it becomes a white dwarf, slowly accreting onto the dead remnant to pollute its atmosphere .

So is this now the end of our tale? A white dwarf surrounded by the fissioned remains of the asteroid belt, orbited by our more distant planets on wide orbits? It could be, depending on the existence of Planet 9.

Proposed by Mike Brown and Konstantin Batygin at the California Institute of Technology, Planet 9 is a possible addition to our solar system that sits on a very distant orbit beyond Neptune. Its presence is suggested by the alignment of six small objects in the Kuiper belt, a second outer band of rocky rubble that includes the dwarf planet, Pluto.

How Planet 9 might have formed remains a subject of debate. A likely scenario is that the planet formed in the neighborhood of the gas giants, but was thrown outwards in a game of gravitational pinball during a chaotic period as our planet-forming disc was evaporating. If this is true, the planet may be able to enact a terrible revenge. 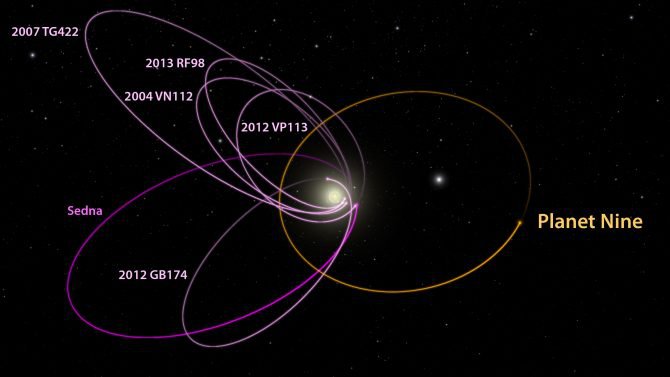 The six most distant objects in the solar system with orbits exclusively beyond Neptune (magenta) all line up in a single direction, indicating the presence of an outside force from an unseen Planet 9.Image credit: Caltech/R. Hurt; IPAC.

Running a set of 300 simulations, Veras discovered that the fate of Planet 9 will depend on the planet mass, the distance of its current orbit and how rapidly the sun loses its mass. In the most benign outcome, Planet 9 meets the same fate as the gas giants and drifts outwards onto an even longer orbit. However, there are two situations in which this expansion causes the orbit of Planet 9 to bend.

If a star loses mass gradually, then the orbiting planets will gently spiral outwards and keep their nearly circular paths. But if the stellar mass loss is more rapid, then very distant planets that are more loosely held by the star’s gravity may undergo a runaway expansion of their orbits. As the planet shoots away, its orbit can become bent into an ellipse. 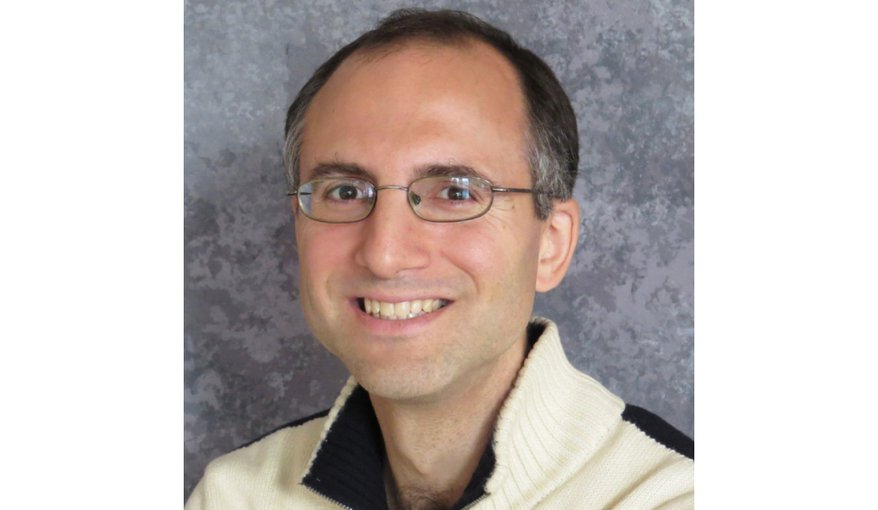 Such distant worlds also risk becoming susceptible to the gravitational tug of the surrounding stars in the galaxy. Known as the “galactic tide”, this force is much too weak to affect the planets in their current positions. Yet if Planet 9 drifts too far outwards, then the tidal forces could become strong enough to bend the planet’s orbit.

On an elliptical path, Planet 9 could move from its distant location to swing into the neighborhood of the gas giants. If the planet is massive enough, this could result in either Uranus or Neptune being ejected from the solar system to become rogue worlds: a fitting, final revenge for Planet 9.

Veras’s calculations suggest the most risky discovery for internal harmony would be a Jupiter-sized Planet 9 on an orbit beyond 300 AU, or 300 times the current distance between the Earth and the sun. For comparison, Neptune sits at 30 AU and the dwarf planet Sedna is three times as far, at about 86 AU. Alternatively, a smaller super-Earth Planet 9 could pose a risk if it was further out than 3000 AU.

Observing the gory remains of this process in other star systems provides us with more than just an eerie snapshot of our future. The crushed up asteroids in the atmosphere of white dwarfs reveal the composition of that planetary system.

“There’s no other way of performing an exoplanet autopsy,” explains Veras.

The results can reveal whether the asteroids and planets that orbited the star have a similar composition to our own or something more exotic. So-called “carbon worlds” have been proposed to orbit stars more carbon-rich than our own, whose rocky base may contain graphite and diamond rather than silicates.

So far, the planet autopsy has shown Earth-like remnants, but this is one area in which we would love to see more dead remains.