About Image
Curiosity Rover's Self Portrait at 'John Klein' Drilling Site. Credit: NASA/JPL-Caltech/MSSSNASA/JPL-Caltech/MSSS
This illustration depicts a lake of water partially filling Mars' Gale Crater, receiving runoff from snow melting on the crater's northern rim. Evidence of ancient streams, deltas and lakes that NASA's Curiosity Mars rover mission has found in the patterns of sedimentary deposits in Gale Crater suggests the crater held a lake such as this more than three billion years ago, filling and drying in multiple cycles over tens of millions of years.NASA/JPL-Caltech/ESA/DLR/FU Berlin/MSSS
This computer-generated view based on multiple orbital observations shows Mars' Gale crater as if seen from an aircraft north of the crater.NASA/JPL-Caltech/ASU/UA
Sept. 18, 2017
Research Highlight

Ancient Lake On Mars Was Hospitable Enough To Support Life

An up-close view of Mars’ rocky deposits by NASA’s Curiosity rover shows a changing climate in the planet’s ancient past that would have left the surface warm and humid enough to support liquid water — and possibly life. Evidence of an ancient lake points to the prospect of two unique habitats within its shores; the lower part of the lake was devoid of oxygen compared to an oxygen-rich upper half.

In a recent paper published in the journal Science, “Redox stratification of an ancient lake in Gale crater,” Stony Brook University geoscientist Joel Hurowitz and his colleagues used more than three years of data retrieved from the rover to paint a picture of ancient conditions at Gale Crater, the lowest point in a thousand kilometers. The site, a 150-mile kilometer crater formed during an impact around 3.8 billion years ago, once flowed with rivers ending in a lake. The sedimentary rocks laid down by these rivers and onto the lakebed tell the story of how the environment changed over time. 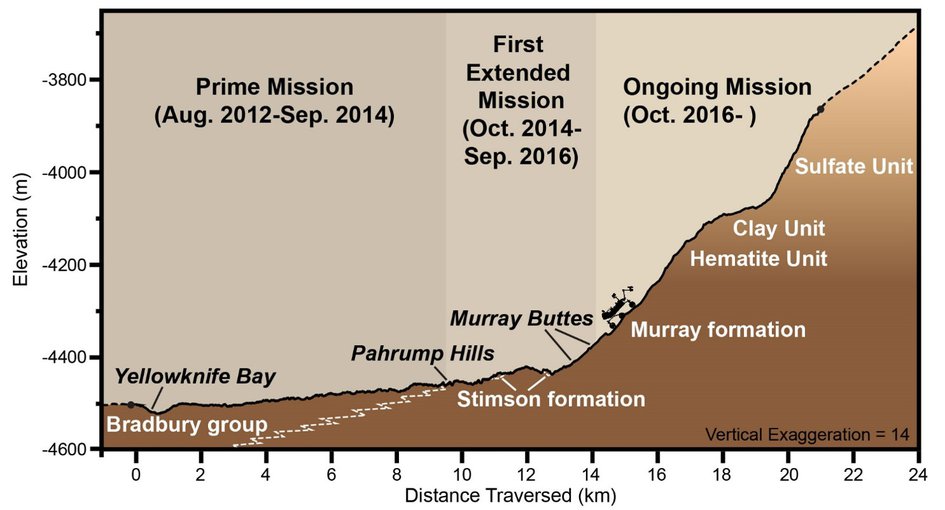 Curiosity landed on rocks known as the Bradbury group. The Murray formation consist of younger rocks at the base of Mount Sharp. The height is exaggerated in the diagram.Image credit: NASA/JPL-Caltech.

Curiosity landed on a group of sedimentary rocks known as the Bradbury group. The rover sampled a part of this group called the Sheepbed mudstones, as well as rocks from the Murray formation at the base of the 5-kilometer high peak at the center of the crater known as Mount Sharp. Both types of rocks were deposited in the ancient lake, but the Sheepbed rocks are older and occur lower in the stratigraphic layers of rocks. Comparing the two types of rocks can lead to interesting revelations about the paleoenvironment.

Rocks that form at the same time in the same area can nevertheless display differences in composition and other characteristics. These different groupings are known as “facies” and the Murray formation is split into two facies. One is comprised mainly of hematite and phyllosilicate, and given the name HP, while the other is the magnetite-silicate facies, known as MS.

“The two Murray facies were probably laid down at about the same time within different parts of the lake,” explained Hurowitz. “The former laid down in shallow water, and the latter in deeper water.”

The near-shore HP facies have thicker layers in the rocks compared to the thin layers of the deeper water MS facies. This difference in layer thickness is because the river flowing into the lake would have slowed down and dumped some of its sedimentary material at the lake shore. The flow would then have spread into the lake and dropped finer material into the deeper parts of the lake. .

The different mineralogy of the two facies was caused by the lake becoming separated into two layers. Ultraviolet (UV) radiation along with low levels of atmospheric oxygen penetrated the upper part of the lake and acted as oxidants on molecules in the water. These ions of iron (Fe2+) and manganese (Mn2+) were brought to the lake via seepage of groundwater through the lake floor. 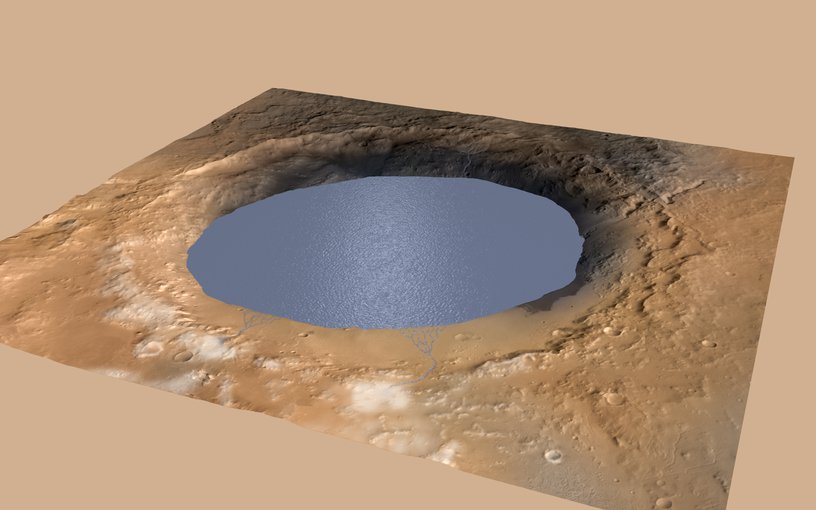 An illustration showing how the lake in the crater might have looked.Image credit: NASA/JPL-Caltech/ESA/DLR/FU Berlin/MSSS.

When the UV and oxygen interacted with these, they lost electrons, meaning that they had become “oxidized.” The oxidized iron and manganese precipitated into minerals — hematite and manganese oxide — that eventually made up the rocks sampled by Curiosity in the HP facies. However, the UV and oxygen didn’t reach all the way to the lake floor, so the iron and manganese wasn’t oxidized in the deeper part of the lake, and instead became the mineral known as magnetite, making up the MS facies.

The difference in oxidation of the two facies in the Murray formation due to differences in layers of the lake is known as redox stratification. Identifying redox stratification in the ancient lake shows that there were two completely different types of potential habitat available to any microbial life that might have been present.

“Curiosity will definitely be able to examine the rocks higher up in the stratigraphy to determine if lake evaporation influenced the rocks deposited in it,” said Hurowitz. “In fact, that’s exactly what the rover is doing as we speak at the area known as Vera Rubin Ridge.”

Thicker material (clastics) are close to the shore. Finer material is towards the deeper part of the lake. UV and O2 oxidize iron and manganese, creating what is known as redox stratification. This is reflected in the mineralogy.Image credit: Hurowitz et al. (2017). Science..

“The timing of this climate shift is not something we can tell for sure because we haven’t seen the Sheepbed member and the Murray formation in contact with each other,” said Hurowitz. “If we had, then we might be able to tell if the change in their chemical and mineralogical properties were abrupt (indicating rapid climate change) or gradual. At best, what we can say is that the rocks that we examined were likely deposited over a timespan of tens of thousands of years to as much as around 10 million years.”

The climate change indicated in the rocks shows that the ancient Martian environment would have been warm and humid enough to sustain liquid water on the surface. The redox stratification of the lake as revealed by the different mineralogy in the Murray formation shows that there would have been two different environments within the lake itself. If microbial life was present on Mars at this time, the different potentially habitable niches could have encouraged diversity with anaerobic forms possibly living in the lower depths of the lake.

The Astrobiology Program was involved in all stages of the MSL mission. This included the development of instruments onboard the Curiosity rover, including Sample Analysis at Mars (SAM) and Chemistry & Mineralogy (CheMin).

The Astrobiology Program currently supports researchers involved in Curiosity mission operations and analysis of data from the rover.