A Network for Ocean Worlds

With the Network for Ocean Worlds (NOW), NASA’s Astrobiology Program is helping to advance studies of the Earth and other ocean worlds by facilitating communication among active research teams funded across the scientific community.

Water is essential for life as we know it, and so far, Earth is the only planet we know of with liquid water on its surface in our galaxy. But there are a number of planets that have atmospheric water vapor, or ice, and there’s likely extraterrestrial subsurface water, too.

That “less-obvious” water can be detected via spectroscopy, gravitational measurements, and geologic indicators, including volcanic activity. “What’s on the surface can tell us what’s going on under the surface,” says Alyssa Rhoden, a planetary scientist at the Southwest Research Institute and Co-Lead for NOW. 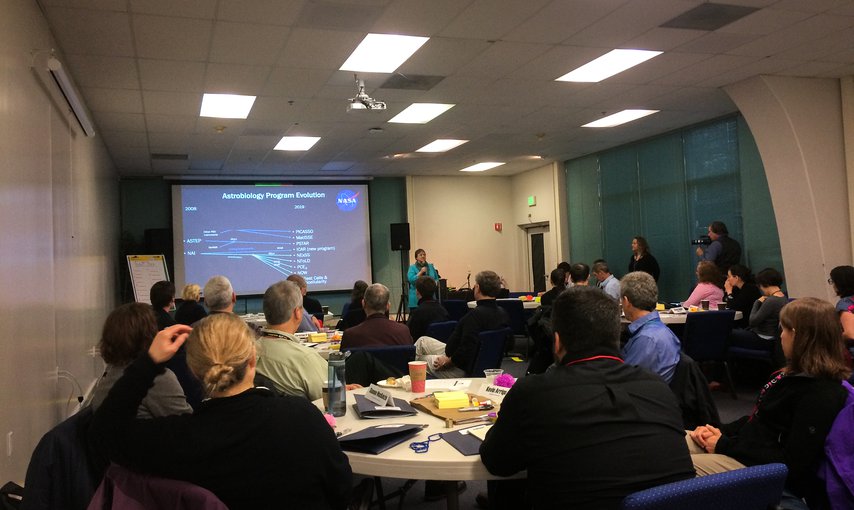 In July, 2018 scientists confirmed a subglacial lake on Mars almost a mile below the planet’s surface. When Cassini flew by Enceladus, one of Saturn’s moons, geysers of water were spotted. Subsequent gravimetric data showed that there was an ocean of subsurface water. Two of Jupiter’s moons, Europa and Ganymede, and the asteroid Ceres also likely have below-ground water.

Knowing how important water is for life, and having identified places in the Universe where some form of water likely or definitely does exist, means that those planets, moons, or asteroids are where astrobiologists can more reliably seek life. Detecting life is the core of astrobiology.

To maximize what Chris German, a marine geochemist at Woods Hole Oceanographic Institute and NOW&nbspCo-Lead, calls the “expanding universe of astrobiology” NASA set up Research Coordination Networks (RCNs). The RCN dedicated to extraterrestrial water is called the Network for Ocean Worlds (NOW).

The Team Comes Together

The idea, says German, a co-lead on the NOW&nbspRCN, is to make it less “bewildering for one person to be abreast of everything that’s going on,” by breaking up the work into four key areas of study. 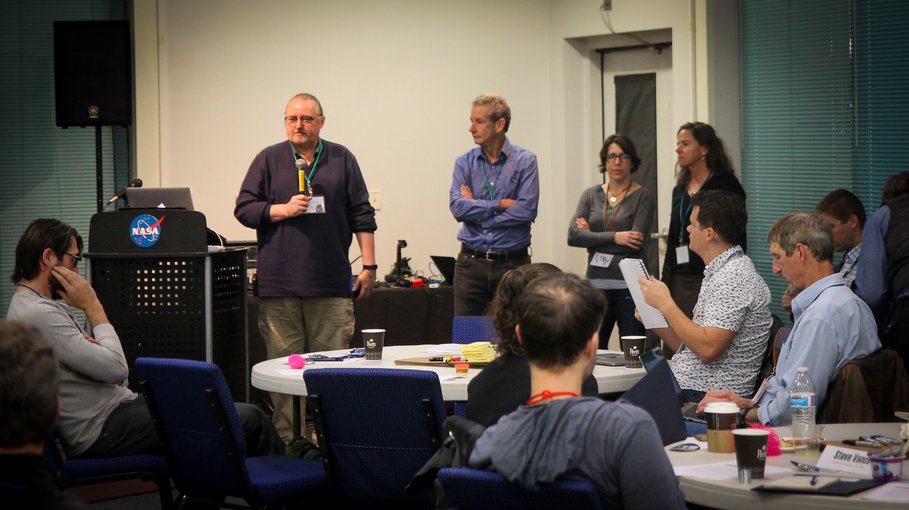 To that end, NOW has gathered a huge range of subject-matter experts. The first meeting of the RCN in December, 2019, brought together about 50 people in relevant fields, each representing the work of entire scientific teams. This wide breadth of research meant that leadership for the network needed to include delegates from varied scientific disciplines, and co-leads were selected to represent the different aspects of ocean world research.

“Alison [Murray] (Desert Research Institution) is our microbiologist and is interested in life detection,” explains German. “Alyssa [Rhoden] (Southwest Research Institute) is a planetary geoscientist, looking at how planets function from a physics perspective. I am coming at it from a geochemistry perspective, the glue that pulls those together.”

The fourth and final co-lead added to the team was Kevin Arrigo (Stanford University), an expert in biogeochemical processes that happen at the interfaces of ice and ocean water.

Life on (or in) Ocean Worlds

As with many areas of research in astrobiology, the Earth serves as the starting point for understanding the potential habitability of worlds that either support liquid water currently, or did at some point in their history. Photosynthesis is a main energy driver of life on Earth, yet there could be other ways that celestial bodies generate power for life. 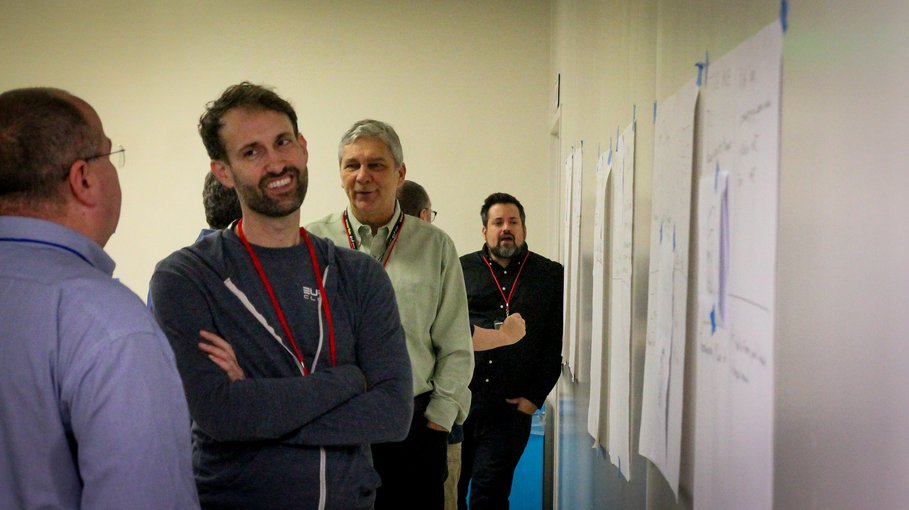 Around fifty researchers representing a wide range of scientific subjects gathered for the first meeting of the Network for Ocean Worlds (NOW) in December, 2019, at the NASA Ames Research Center.Image credit: NASA Astrobiology / Aaron Gronstal.

The Ocean Worlds team is now off and running. At last December’s meeting, four priority subject areas were decided upon via brainstorming with the entire group. Primary to detecting and understanding life is understanding the context of what makes a planet habitable. Those underlying conditions are the bedrock for understanding how the physics and chemistry could make an ocean world habitable and support the development of life. A second priority are questions about the biology of an ocean world—how could that be sustained, what form would that life take, and how to look for it?

Third is how to establish credible analogs for ocean worlds here on Earth. Analogs are useful because they give scientists a place to test ideas and equipment in challenging circumstances without the expense and danger of leaving home. German says that there are many claims that certain locales are great analogs, but, “wouldn’t it be nice to get together as a group and ask: Is it really a credible analog? How about we hammer on some of those ideas and say, ‘what is it we know about Enceladus’, for example, that means a particular site is going to be a good analog?”

“That way we know we are going to the right place and we’re investing the money wisely,” says German.

The fourth area of focus for the NOW&nbspscientists is understanding what new technologies might be needed to better understand ocean worlds.

“It’s one thing to fly past and do remote detection, NASA is good at that,” commented German. “Then, if you want to go and land on site, we can borrow expertise from the moon-landing or rovers.” 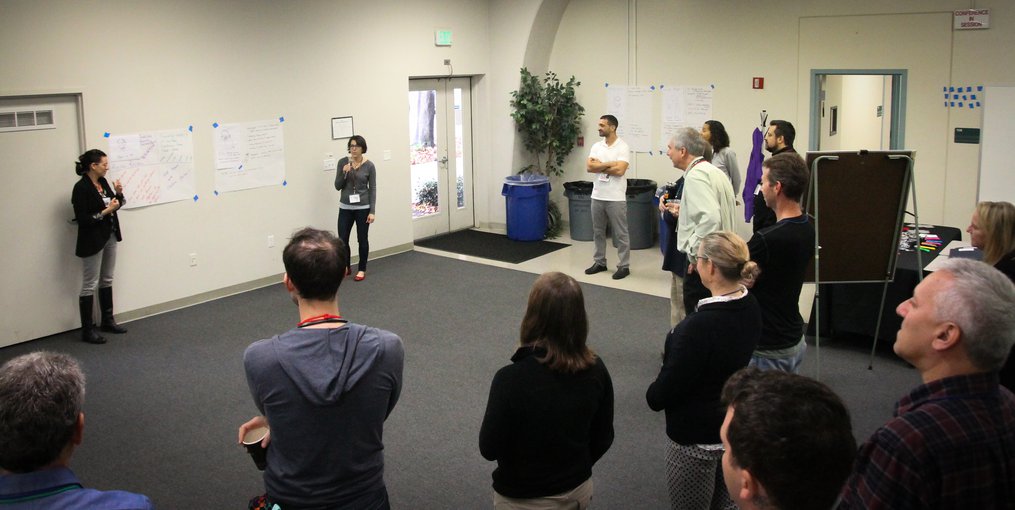 Researchers gathered at the NASA Ames Research Center for the first meeting of the Network for Ocean Worlds (NOW) in December of 2019.Image credit: NASA Astrobiology / Aaron Gronstal.

Space technologies from previous NASA missions can inform future efforts to study ocean worlds in our solar system, but the search for biosignatures on specific locations like Europa or Enceladus will require specific on-the-ground technology.

“If we want to know if there’s life on one of these bodies, we need to go there with robotic spacecraft… something that can land, something that can explore, something that can go into the ocean once landed,” says Rhoden. “Special equipment for drilling through thick ice shelves and autonomous robots that have the ability to gather the most useful evidence will both need to be programmed based on what NOW knows about the planet, moon, or asteroid.”

Some of that information will be coming from the next ocean worlds explorer: The Europa Clipper. 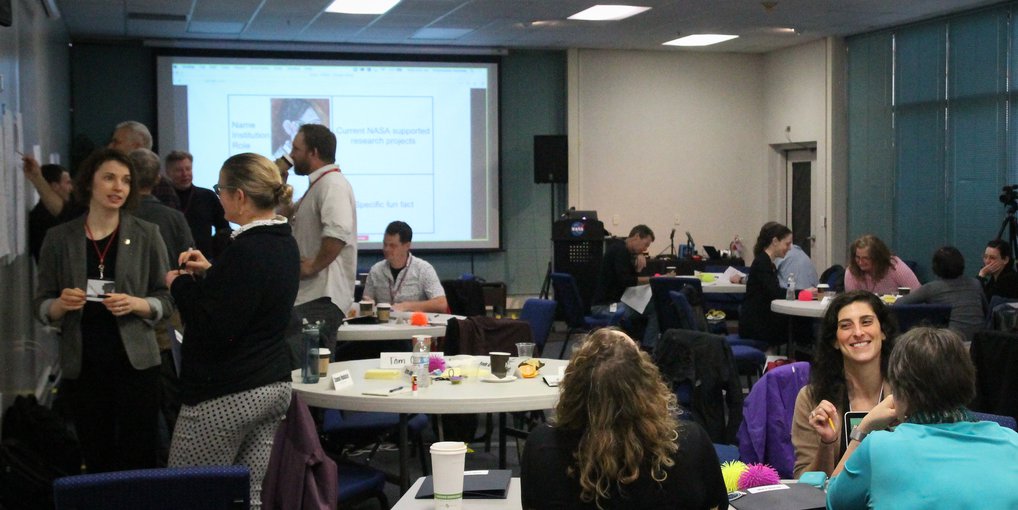 Clipper will also have instruments that will allow the mission to collect data concerning surface chemistry from space.

“That will help us understand if there are exchange processes going on between the ocean and ice shelf,” continues Rhoden. “That’s information we would use to build models and do experiments.”

There are plenty of discoveries to be made on known ice-rich candidate ocean worlds, and of course there are new ones to be discovered.

“If we went to the moons of Uranus, the next big question would be: ‘Can life [emerge] and survive in these oceans?” says Rhoden. “How much liquid is there? How much salt is there? What kind of rock might be in the interior? What is the availability of these things to interact with each other to create the nutrients we need for life?”

NOW’s toolbox stands at the ready to tackle these questions.