Astrobiology for the Incarcerated

The research of NASA’s Astrobiology Program investigates life’s origins on Earth and the distribution of life in the Universe. In concert with that, the Program is committed to sharing its scientific findings and discoveries with public and professional audiences. Understanding life’s potential among the stars and Earth’s place in the Universe are topics that spark the imagination and can inspire minds to engage with broader subject matter in Science, Technology, Engineering, and Math (STEM).

In recent years, one of the Program’s most successful efforts is a series of lectures and hands-on programs for one of the most STEM underserved and underrepresented populations in America, incarcerated adults and youth. The mission of the Astrobiology for the Incarcerated (AfI) initiative is to bring astrobiology lectures and programs into correctional facilities in the United States.

Begun in 2016, AfI is a partnership between NASA’s Astrobiology Program, the Initiative to Bring Science Programs to the Incarcerated (INSPIRE) at the University of Utah, and the Sustainability in Prisons Project (SPP) at The Evergreen State College in Washington. 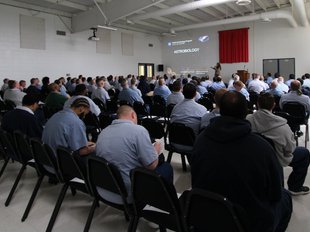 All Learners MatterAstrobiology for the Incarcerated

Using the stories astrobiology tells of our origins and the search for life elsewhere, AfI sparks curiosity and the desire to learn more in one of the most isolated and marginalized populations in America, incarcerated adults and youth.