With the Discovery of Boron on Mars, the Package of Chemicals Needed for Life May Well Be Complete 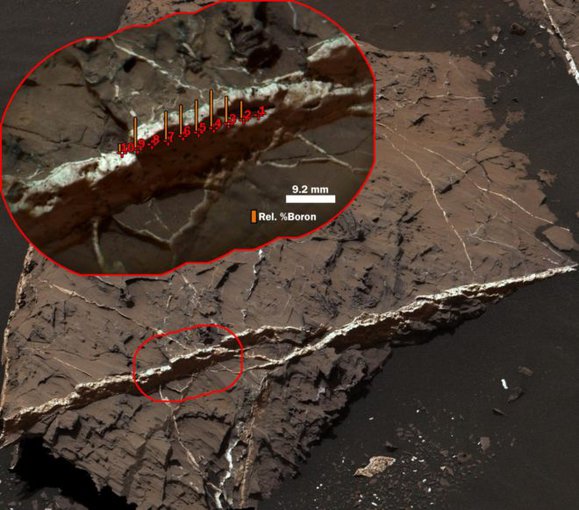 For years, noted chemist and synthetic life researcher Steven Benner has talked about the necessary role of the element boron in the origin of life.

Without boron, he has found, many of the building blocks needed to form the earliest self-replicating ribonucleic acid (RNA) fall apart when they come into contact with water, which is nonetheless needed for the chemistry to succeed. Only in the presence of boron, Benner found and has long argued, can the formation of RNA and later DNA proceed.

Now, to the delight of Benner and many other scientists, the Curiosity team has found boron on Mars. In fact, as Curiosity climbs the mountain at the center of Gale Crater, the presence of boron has become increasingly pronounced.

And to make the discovery all the more meaningful to Benner, the boron is being found in rock veins. So it clearly was carried by water into the fractures, and was deposited there some 3.5 billion years ago.

Combined with earlier detections of phosphates, magnesium, peridots, carbon and other essential elements in Gale Crater, Benner told me, “we have found on Mars an environment entirely consistent with what we consider conducive for the origin of life.