Home

News

What Would Happen If Mars ...

About Image
The thick atmosphere of Venus can be seen in this image captured by the Akatsuki orbiter. This is a synthesized false color image of Venus using 283-nm and 365-nm images.JAXA
In 1970, Venera 7 made the first soft landing on Venus and returned 23 minutes of data. Image from Issue #3 of Astrobiology: The Story of our Search for Life in the Universe. The Astrobiology Graphic Histories are available at: https://astrobiology.nasa.gov/resources/graphic-histories/NASA Astrobiology Program
Artist’s rendering of a solar storm hitting Mars and stripping ions from the planet's upper atmosphere.NASA/GSFC
Nov. 4, 2018
Feature Story

What Would Happen If Mars And Venus Swapped Places?

What would happen if you switched the orbits of Mars and Venus? Would our solar system have more habitable worlds?

It was a question raised at the “Comparative Climatology of Terrestrial Planets III”; a meeting held in Houston at the end of August. It brought together scientists from disciplines that included astronomers, climate science, geophysics and biology to build a picture of what affects the environment on rocky worlds in our solar system and far beyond.

The question regarding Venus and Mars was proposed as a gedankenexperiment or “thought experiment”; a favorite of Albert Einstein to conceptually understand a topic. Dropping such a problem before the interdisciplinary group in Houston was meat before lions: the elements of this question were about to be ripped apart.

The Earth’s orbit is sandwiched between that of Venus and Mars, with Venus orbiting closer to the sun and Mars orbiting further out. While both our neighbors are rocky worlds, neither are top picks for holiday destinations.

Mars has a mass of just one-tenth that of Earth, with a thin atmosphere that is being stripped by the solar wind; a stream of high energy particles that flows from the sun. Without a significant blanket of gases to trap heat, temperatures on the Martian surface average at -80°F (-60°C). Notably, Mars orbits within the boundaries of the classical habitable zone (where an Earth-like planet could maintain surface water) but the tiny planet is not able to regulate its temperature as well as the Earth might in the same location. 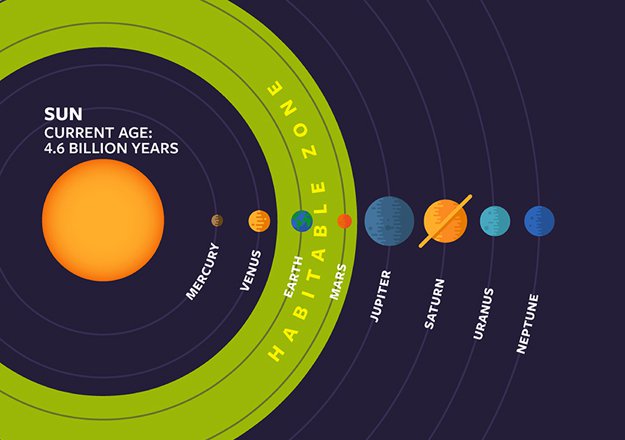 The classical habitable zone around our sun marks where an Earth-like planet could support liquid water on the surface.Image credit: Cornell University.

Unlike Mars, Venus has nearly the same mass as the Earth. However, the planet is suffocated by a thick atmosphere consisting principally of carbon dioxide. The heat-trapping abilities of these gases soar surface temperatures to above a lead-melting 860°F (460°C).

But what if we could switch the orbits of these planets to put Mars on a warmer path and Venus on a cooler one? Would we find that we were no longer the only habitable world in the solar system?

“Modern Mars at Venus’s orbit would be fairly toasty by Earth standards,” suggests Chris Colose, a climate scientist based at the NASA Goddard Institute for Space Studies and who proposed the topic for discussion.

Dragging the current Mars into Venus’s orbit would increase the amount of sunlight hitting the red planet. As the thin atmosphere does little to affect the surface temperature, average conditions should rise to about 90°F (32°C), similar to the Earth’s tropics. However, Mars’s thin atmosphere continues to present a problem.

Colose noted that without a thicker atmosphere or ocean, heat would not be transported efficiently around Mars. This would lead to extreme seasons and temperature gradients between the day and night. Mars’s thin atmosphere produces a surface pressure of just 6 millibars, compared to 1 bar on Earth. At such low pressures, the boiling point of water plummets to leave all pure surface water frozen or vaporized.

Mars does have have ice caps consisting of frozen carbon dioxide, with more of the greenhouse gas sunk into the soils. A brief glimmer of hope for the small world arose in the discussion with the suggestion these would be released at the higher temperatures in Venus’s orbit, providing Mars with a thicker atmosphere. 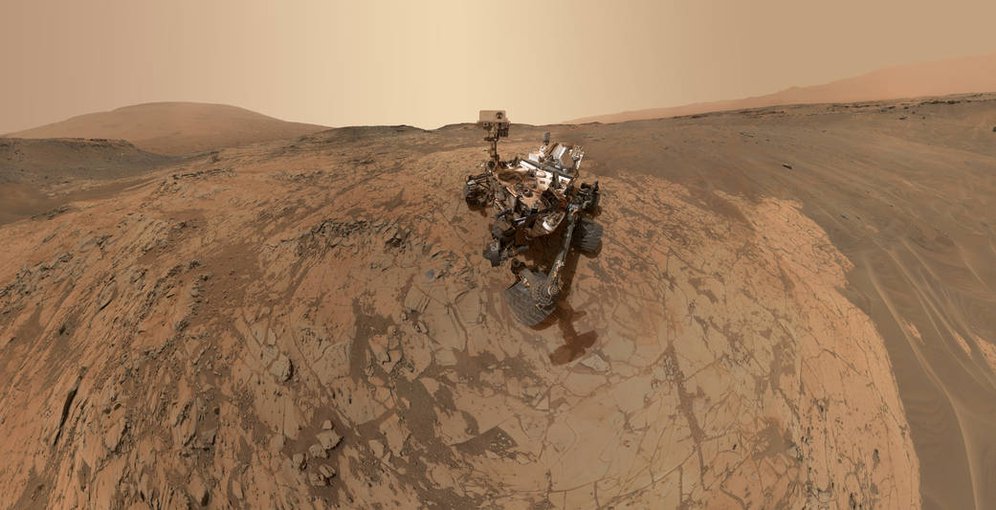 The surface of Mars captured by a selfie taken by the Curiosity rover at a site named Mojave. (NASA/JPL-Caltech/MSSS.)

However, recent research suggests there is not enough trapped carbon dioxide to provide a substantial atmosphere on Mars. In an article published in Nature Astronomy, Bruce Jakosky from the University of Colorado and Christopher Edwards at Northern Arizona University estimate that melting the ice caps would offer a maximum of a 15 millibars atmosphere.

The carbon dioxide trapped in the Martian rocks would require temperatures exceeding 300°C to be liberated, a value too high for Mars even at Venus’s orbit. 15 millibars doubles the pressure of the current atmosphere on Mars and surpasses the so-called “triple point” of water that should permit liquid water to exist. However, Jakosky and Edwards note that evaporation would be rapid in the dry martian air. Then we hit another problem: Mars is not good at holding onto atmosphere.

Orbiting Mars is NASA’s Mars Atmosphere and Volatile Evolution Mission (MAVEN). Data from MAVEN has revealed that Mars’s atmosphere has been stripped away by the solar wind. It is a problem that would be exacerbated at Venus’s orbit.

“Atmospheric loss would be faster at Venus’s current position as the solar wind dynamic pressure would increase,” said Chuanfei Dong from Princeton University, who had modeled atmospheric loss on Mars and extrasolar planets. 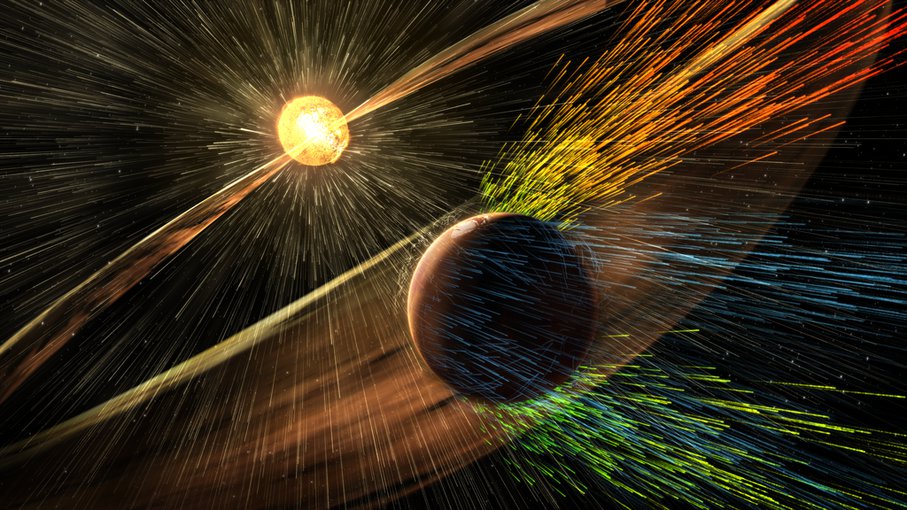 This “dynamic pressure” is the combination of the density of particles from the solar wind and their velocity. The velocity does not change greatly between Mars and Venus —explained Dong— but Venus’s closer proximity to the sun boosts the density by almost a factor of 4.5. This would mean that atmosphere on Mars would be lost even more rapidly than at its current position.

“I suspect it would just be a warmer rock,” Colose concluded.

While Mars seems to fare no better at Venus’s location, what if Venus were to be towed outwards to Mars’s current orbit? Situated in the habitable zone, would this Earth-sized planet cool-off to become a second habitable world?

Surprisingly, cooling Venus might not be as simple as reducing the sunlight. Venus has a very high albedo, meaning that the planet reflects roughly 75% of the radiation it receives. The stifling temperatures at the planet surface are due not to a high level of sunlight but to the thickness of the atmosphere. Conditions on the planet may therefore not be immediately affected if Venus orbited in Mars’s cooler location.

“Venus’s atmosphere is in equilibrium,” pointed out Kevin McGouldrick from the University of Colorado and contributing scientist to Japan’s Akatsuki mission to explore Venus’s atmosphere. “Meaning that its current structure does depend on the radiation from the sun. If you change that radiation then the atmosphere will eventually adjust but it’s not likely to be quick.”

The surface of Venus captured from the former Soviet Union’s Venera 13 spacecraft, which touched down in March 1982.Image credit: NASA.

Exactly what would happen to Venus’s 90 bar atmosphere in the long term is not obvious. It may be that the planet would slowly cool to more temperate conditions. Alternatively, the planet’s shiny albedo may decrease as the upper atmosphere cools. This would allow Venus to absorb a larger fraction of the radiation that reached its new orbit and help maintain the stifling surface conditions. To really cool the planet down, Venus may have to be dragged out beyond the habitable zone.

“Past about 1.3 au, carbon dioxide will begin to condense into clouds and also onto the surface as ice,” said Ramses Ramirez from the Earth-Life Sciences Institute (ELSI) in Tokyo, who specializes in modelling the edges of the habitable zone. (An “au” is an astronomical unit, which is the distance from our sun to Earth.)

Once carbon dioxide condenses, it can no longer act as a greenhouse gas and trap heat. Instead, the ice and clouds typically reflect heat away from the surface. This defines the outer edge of the classical habitable zone when the carbon dioxide should have mainly condensed out of the atmosphere at about 1.7 au. The result should be a rapid cooling for Venus. However, this outer limit for the habitable zone was calculated for an Earth-like atmosphere. 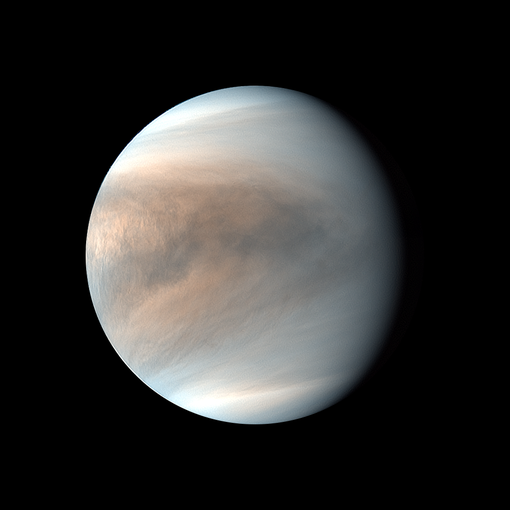 The thick atmosphere of Venus can be seen in this image captured by the Akatsuki orbiter. This is a synthesized false color image of Venus using 283-nm and 365-nm images.Image credit: JAXA.

“Venus has other things going on in its atmosphere compared to Earth, such as sulphuric acid clouds,” noted Ramirez. “and it is much drier, so this point (where carbon dioxide condenses) may be different for Venus.”

If Venus was continually dragged outwards, even the planet’s considerable heat supply would become exhausted.

“If you flung Venus out of the solar system as a rogue planet, it would eventually cool-off!” pointed out Max Parks, a research assistant at NASA Goddard.

It seems that simply switching the orbits of the current Venus and Mars would not produce a second habitable world. But what if the two planets formed in opposite locations? Mars is unlikely to have fared any better, but would Venus have avoided forming its lead-melting atmosphere and become a second Earth?

At first glance, this seems very probable. If the Earth was pushed inwards to Venus’s orbit, then water would start to rapidly evaporate. Like carbon dioxide, water vapour is a greenhouse gas and helps trap heat. The planet’s temperature would therefore keep increasing in a runaway cycle until all water had evaporated. This “runaway greenhouse effect” is a possible history for Venus, explaining its horrifying surface conditions. If the planet had instead formed within the habitable zone, this runaway process should be avoided as it had been for the Earth.

“When I suggested this topic, I wondered whether two inhabited planets would exist (the Earth and Venus) if Mars and Venus formed in opposite locations,” Colose said. “Being at Mars’s orbit would avoid the runaway greenhouse and a Venus-sized planet wouldn’t have its atmosphere stripped as easily as Mars.” 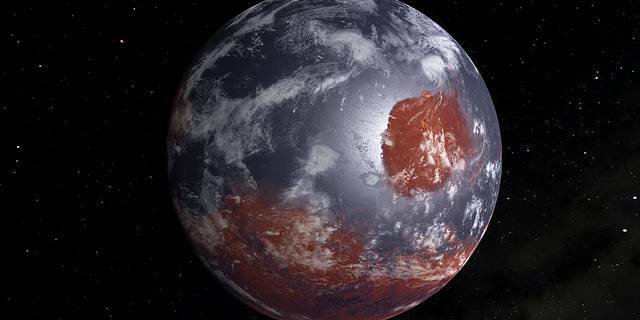 But discussion within the group revealed that it is very hard to offer any guarantees that a planet will end up habitable. One example of the resultant roulette game is the planet crust. The crust of Venus is a continuous lid and not series of fragmented plates as on Earth. Our plates allow a process known as plate tectonics, whereby nutrients are cycled through the Earth’s surface and mantle to help support life. Yet, it is not clear why the Earth formed this way but Venus did not.

One theory is that the warmer Venusian crust healed breaks rapidly, preventing the formation of separate plates. However, research done by Matt Weller at the University of Texas suggests that the formation of plate tectonics might be predominantly down to luck. Small, random fluctuations might send two otherwise identical planets down different evolutionary paths, with one developing plate tectonics and the other a stagnant lid. If true, even forming the Earth in exactly the same position could result in a tectonic-less planet. 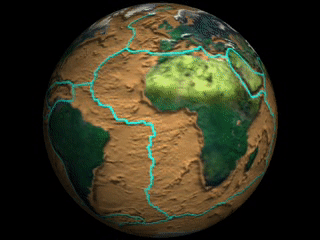 Venus’s warmer orbit may have shortened the time period in which plate tectonics could develop, but moving the planet to Mars’s orbit offers no guarantees of a nutrient-moving crust.

Yet whether plate tectonics is definitely needed for habitability is also not known. It was pointed out during the discussion that both Mars and Venus show signs of past volcanic activity, which might be enough action to produce a habitable surface under the right conditions.

Of course, moving a planet’s orbit is beyond our technological abilities. There are other techniques that could be tried, such as an idea by Jim Green, the NASA chief scientist and Dong involving artificially shielding Mars’s atmosphere from the solar wind.

“We reached the opposite conclusion to Bruce’s paper,” Dong noted cheerfully. “That is might be possible to use technology to give Mars an atmosphere. But it is fun to hear different voices and this is the reason why science is so interesting!”