About Image
This artist’s impression shows how Mars may have looked about four billion years ago. The young planet Mars would have had enough water to cover its entire surface in a liquid layer about 140-meters deep. But it is more likely that the liquid would have pooled to form an ocean occupying almost half of Mars’s northern hemisphere, and in some regions reaching depths greater than 1.6 kilometres.ESO/M. Kornmesser
The dark, narrow streaks flowing downhill on Mars at sites such as this portion of Horowitz Crater could be formed by seasonal flow of water on modern-day Mars. The streaks are roughly the length of a football field. The imaging and topographical information in this processed view come from the High Resolution Imaging Science Experiment (HiRISE) camera on NASA's Mars Reconnaissance Orbiter.Credit: NASA/JPL-Caltech/Univ. of Arizona
NASA scientists have determined that a primitive ocean on Mars held more water than Earth's Arctic Ocean and that the Red Planet has lost 87 percent of that water to space.NASA/GSFC
An orbital view of the north polar region of Mars.NASA/JPL-Caltech/MSSS
Oct. 14, 2016
Feature Story

Water on Mars: The Story So Far

About one-fifth of Mars was once underwater, raising the prospects for life.

Although the surface of Mars is presently cold and dry, plenty of evidence suggests that the red planet was once partly covered with water. Researchers have theorized that life might have evolved on Mars when it was wet, and life could even be there now, hidden in subterranean aquifers.

“On Earth, water means life,” said Alberto Fairen, an astrobiologist at the Center of Astrobiology in Spain and Cornell University in Ithaca, New York. “The surface of Mars today is extremely dry, but there are lots of clues pointing to a much wetter past. Evidence for past water may be the clue to follow to find extinct life on Mars and if some of that water still persists on Mars today, then for sure the prospects to find extant life go up.”

Water on Mars also has important implications for research areas at NASA beyond the work of the NASA Astrobiology Program. Even if life no longer lives on Mars, or never existed in the first place, water could still prove vital to future life on Mars in the form of human colonies on the red planet. Water is useful not only for drinking, but also to shield against radiation, and as fuel when it is split into hydrogen and oxygen. The prospects of past, present and future life on Mars means that much research at NASA concerning the red planet concentrates on its water. 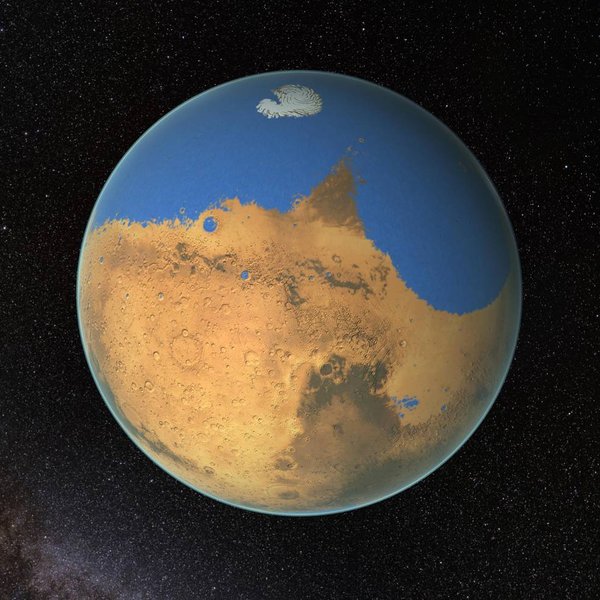 NASA scientists have determined that a primitive ocean on Mars held more water than Earth's Arctic Ocean and that the red planet has lost 87 percent of that water to space. Credit: NASA/GSFC

For decades, abundant research has suggested that rivers, lakes and seas once covered Mars billions of years ago. For example, in 2015, maps of water in the martian atmosphere suggested that Mars might once have had enough water to cover up to a fifth of the planet. In addition, in a different 2015 study, researchers noted that the shape of some martian pebbles suggests they once rolled dozens of miles down a river, hinting that ancient martian waterways were stable and not merely fleeting streams.

Analysis of layers of martian rock suggest that earlier, deeper layers were likely created when Mars had abundant, fresher water, while later layers closer to the surface suggest “an arid planet with just pools of brines, and finally the hyper-arid desert we see today,” Fairen said.

Most of the water on Mars today is likely frozen away in its polar caps. If all this water ice were to melt, estimates suggest that a sphere the size of the red planet might be covered in about 100 feet (30 meters) of water, said Suniti Karunatillake, a planetary scientist at Louisiana State University in Baton Rouge.

Frozen water may not just exist at high latitudes at the martian poles, but also at mid-latitudes. For example, in 2015, scientists discovered that a giant slab of ice as big as California and Texas combined is buried just beneath the surface of Mars between its equator and north pole and covered in protective layers of dust. 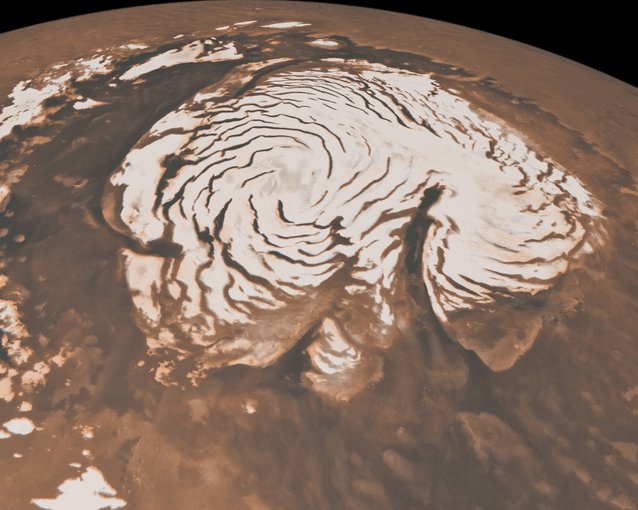 An orbital view of the north polar region of Mars. Credit: NASA/JPL-Caltech/MSSS

There are several types of hydrated minerals on Mars from clays and carbonates to a great diversity of sulfates and chlorides, Fairen said.

“Clays and carbonates may suggest the presence of significant amounts of water, and this water could have been good for biology as it shouldn’t have been too acidic or too salty,” he said. “Clays and carbonates usually appear associated with impact craters, canyons and faults, suggesting that they are very ancient and maybe formed by underground processes and were eventually exposed on the surface by erosion.”

In contrast, sulfates and chlorides only required “minor amounts of water for their formation, generally salty and acidic,” Fairen said. Still, although sulfates and chlorides therefore might not suggest an abundance of water, “microorganisms on Earth can also thrive in such environments — what we call ‘extremophiles.’”

“The big surprise in the past 15 years of exploration is that the inventory of water on Mars is much greater than we had thought,” said Michael Meyer, an astrobiologist and lead scientist of NASA’s Mars Exploration Program. “We have it at the poles and we’re seeing it at mid-latitudes.”

Right now, the surface of Mars is now extremely arid because the air is too thin for liquid water to last for long. The red planet’s atmospheric pressure is just roughly 1/100th of Earth’s and in such thin air water easily boils. However, dark, narrow lines on martian slopes hint that water could run down these formations regularly. 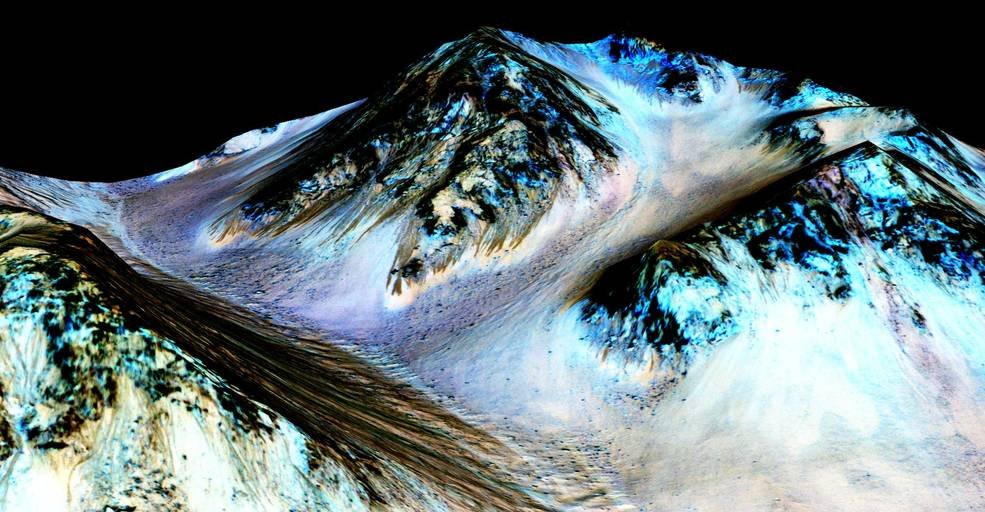 These dark streaks — known as recurring slope lineae, or RSL — favor steep slopes in nearly dust-free regions of Mars, said Alfred McEwen, a planetary scientist at the University of Arizona in Tucson. He noted that RSL are abundant in northern sites such as Valles Marineris, although southern hemisphere sites also host them.

A 2016 paper suggested that RSL are driven by tiny amounts of brines, or salty water, mixed with soil, Karunatillake said. Salt lowers the boiling temperature of water, helping it stay liquid even on Mars.

However, these recent findings also suggested that less water is needed to create RSL than previously assumed. Moreover, this water may be very short-lived, and therefore not an ideal environment for any microorganisms that may exist on Mars. 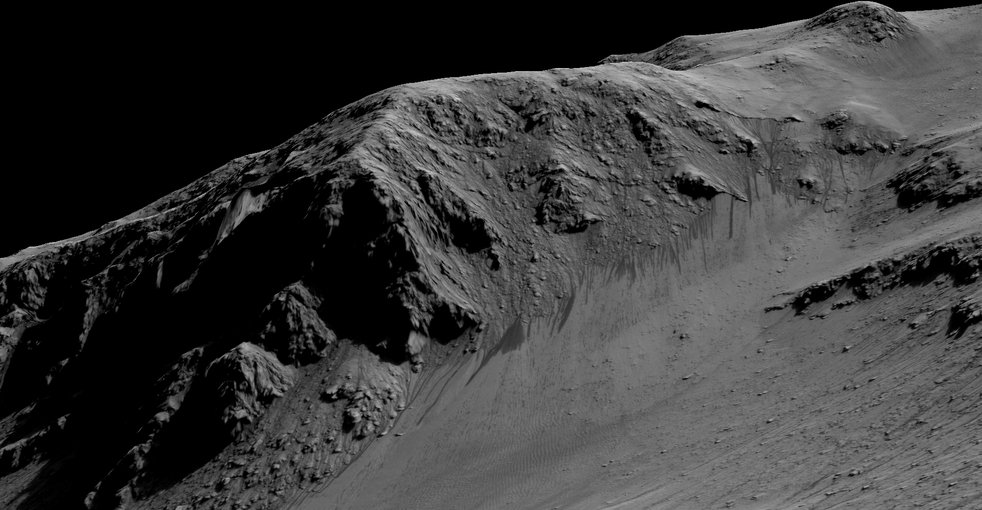 The dark, narrow streaks flowing downhill on Mars at sites such as this portion of Horowitz Crater could be formed by seasonal flow of water on modern-day Mars. The streaks are roughly the length of a football field. The imaging and topographical information in this processed view come from the High Resolution Imaging Science Experiment (HiRISE) camera on NASA's Mars Reconnaissance Orbiter. Credit: NASA/JPL-Caltech/Univ. of Arizona

Instead, the best place to find significant amounts of water on Mars may be in subterranean aquifers. Analysis of martian meteorites such as NWA7034 — martian rocks that landed on Earth after they were blasted off the red planet by cosmic impacts — hint at aquifers in the martian crust, Karunatillake said.

“The obvious place of choice on Mars is the subsurface, if one is at all interested in liquid water,” Meyer said. “In theory, deep down, Mars is warm enough to keep water liquid, and water will naturally flow down there and collect.”

Since Mars has a surface gravity of a little more than one-third Earth’s, its crust is less dense and more porous than that of Earth. Previous research suggested that this means that more water can leak underground. “I consider it likely that there are deep pockets of water in the martian crust not yet detected,” McEwen said.

However, “these are not shallow aquifers,” McEwen said. Karunatillake concurred, noting that these subterranean aquifers may reside miles below the surface. Volcanic outgassing of water vapor from the martian mantle may intermittently replenish these aquifers, Karunatillake said.

Lava tubes, which are natural tunnels within solidified lava, might host subterranean aquifers, Karunatillake said. For instance, there may be lava tubes at or near the volcano Arsia Mons on the Tharsis bulge near the equator of the planet Mars. “Given how deeply lava tubes may go, they might be analogous in a distant sense to the kind of aquifers we see in Hawaii,” Karunatillake said. “Lava tube environments might also have geothermal heat sources that could drive temperatures high enough to keep water liquid.” 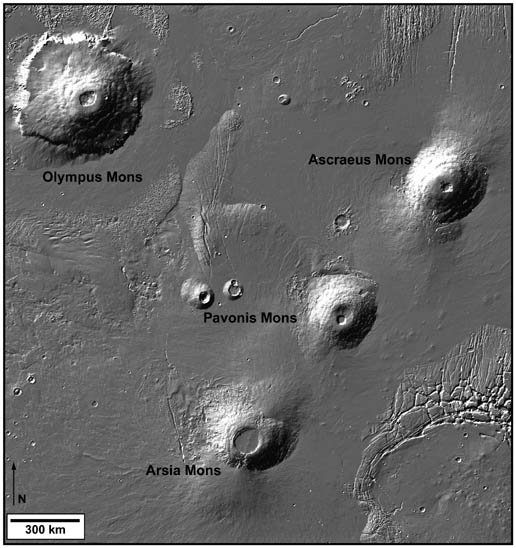 Deep cave systems might also host subterranean aquifers, Karunatillake said. Valles Marineris, a system of canyons that runs along the martian surface east of the Tharsis bulge, possesses a variety of sulfates like some areas on Earth that host cave systems do. “These caves might have trapped liquid water,” Karunatillake said. “They could create a stable environment that could help life evolve, if it was present.”

If subterranean aquifers of liquid water do exist on Mars, Karunatillake recommends ground-penetrating radar campaigns focusing on areas where there is evidence for ancient water-bearing aquifer-driven floods. Such targets may include sites where previous research suggested there is subterranean ice, “given how thick ice layers can cap liquid beneath them in the presence of geothermal energy,” Karunatillake said.

“Although our assets in orbit around Mars haven’t found any subterranean aquifers, there’s a sneaking suspicion we’re only seeing the upper kilometer or so, because radar’s a challenge,” Meyer said.

Ultimately, shedding light on the evolution of water on Mars could yield insights into Earth and other planets, Karunatillake said. Plate tectonics and other fundamental geological activity on Earth are linked with its oceans and on chemically-bound water in the mantle, and understanding the history of water on Mars could help reveal how it influenced the red planet’s geology. “This has a deep relevance to whether a biosphere could ever arise on Mars, or whether Earth-like life would be limited to isolated pockets, if at all,” Karunatillake said.

“Mars and Earth were once more like each other,” Meyer said. “We can look at Mars to test if we understand similar processes on Earth as much as we think we do. You can ask questions like, ‘Did life get started there, and if it did, what was it like, and if it didn’t, what was missing.’ The problem with answering those questions on Earth is that a lot of the early record of life on Earth has been erased, so Mars might be the key to helping answer those questions.”