About Image
The night side of Venus in thermal infrared. This false-color image uses data from the Japanese Akatsuki’s IR2 camera in two wavelengths, 1.74 and 2.26 microns. Darker regions denote thicker clouds. Changes in color can denote differences in cloud particle size or composition from place to place.JAXA / ISAS / DARTS / Damia Bouic
In 1970, Venera 7 made the first soft landing on Venus and returned 23 minutes of data. Image from Issue #3 of Astrobiology: The Story of our Search for Life in the Universe. The Astrobiology Graphic Histories are available at: https://astrobiology.nasa.gov/resources/graphic-histories/NASA Astrobiology Program
Strategic Program: Exoplanets. This artist's concept shows a Super Venus planet on the left, and a Super Earth on the right.NASA/JPL-Caltech/Ames
Feb. 8, 2018
Feature Story

“You can feel what it’s like on Venus here on Earth,” said Kevin McGouldrick from the Laboratory for Atmospheric and Space Physics at the University of Colorado, Boulder. “Heat a hot plate until it glows red, place your palm on its surface and then run over that hand with a truck.”

The surface of Venus is a hellish place. Suffocated by a thick atmosphere, pressure on the Venusian surface is 92 times greater than on the surface of Earth. Temperatures sit at a staggering 863°F (462°C), which is sufficient to melt lead.

The longest a spacecraft has survived in these conditions is a mere 127 minutes; a record set by the Russian Venera 13 mission over 35 years ago.

As the brightest planet in the night sky, Venus allured ancient astronomers into naming the world after the Roman mythological goddess of love and beauty. This now seems an ironic choice, but the contrast between distant observation and surface conditions produces an apt juxtaposition for exoplanets.

The comparison has led to an article in Nature Geoscience by McGouldrick and a nine author white paper advising on astrobiology strategy for the National Science Foundation. The conclusion of both publications echoes the irony of Venus’s name: we need to return to the inferno of Venus to understand habitable worlds. 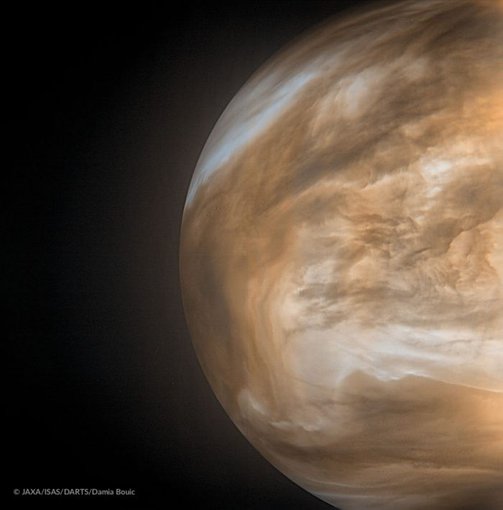 In the last 25 years, scientists have discovered over 3,500 extrasolar planets. The vast majority of these worlds have not been imaged directly, but are detected by tiny influences on their host star. These observations provide a measurement of the planet’s size and the average energy received from the star, but no details of the conditions at the planet surface. This leaves modern astronomers as blind to exoplanets as the ancient Romans were to the worlds of our solar system.

While we cannot visit the surface of exoplanets, our knowledge may be about to take a major leap forward. New instruments such as NASA’s James Webb Space Telescope (launch date 2019) and ESA’s Ariel mission (launch 2026) are aiming to detect the atmospheres of these distant worlds. The enveloping gases are a product of the planet’s geology, chemistry and biology, producing a direct indication of what is occurring on the surface.

However, this signature is hard to measure for terrestrial worlds with thin atmospheres, requiring a large number of precious observing hours. This means we need to select our telescope targets carefully. An ideal choice would be a planet writhing with geological and biological activity that is imprinting its presence in the atmosphere. 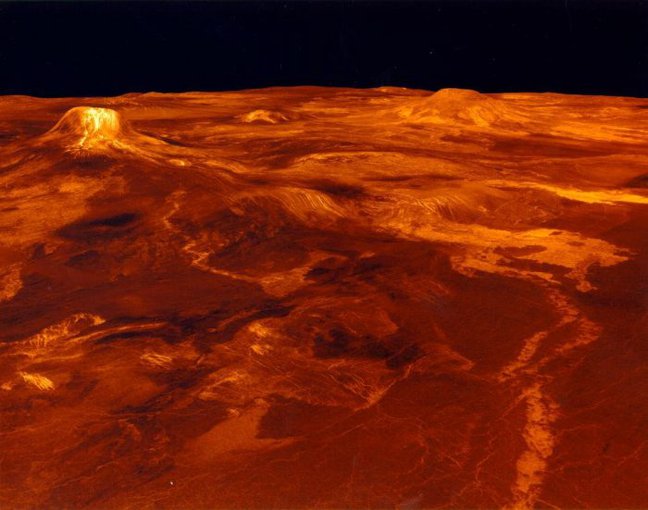 A portion of western Eistla Regio is displayed in this three-dimensional perspective view of the surface of Venus. Synthetic aperture radar data from the spacecraft Magellan is combined with radar altimetry to develop a three-dimensional map of the surface. Rays cast in a computer intersect the surface to create a three-dimensional perspective view. The simulated hues are based on color images recorded by the Soviet Venera 13 and 14 spacecraft. The image, a frame from a video released in 1991, was produced at NASA’s JPL Multimission Image Processing Laboratory.Image credit: NASA JPL Multimission Image Processing Laboratory.

At first glance, a tantalizingly simple way to distinguish these two planets is the circumstellar habitable zone. Broadly defined, this is the region around a star where the radiation levels are right to support liquid water on a planet’s surface. At the inner edge of the habitable zone, water evaporates and is rapidly lost from the planet in a process known as ‘runaway greenhouse’. At the outer edge, carbon dioxide condenses into clouds and is unable to trap sufficient heat to prevent global freezing.

With a thick atmosphere lacking in water, Venus shows signs of having undergone a runaway greenhouse phenomenon that would seem to support the habitable zone edges. But digging a little deeper reveals more complex story. The habitable zone edges are traditionally calculated via climate models for the Earth. Yet, there is evidence that Venus was never that similar to the home planet we know.

While the Earth’s crust is broken into plates, Venus is thought to have a ‘stagnant lid’; a non-mobile crust that does not cycle material and nutrients up from the planet’s interior. Possibly linked with that —or maybe not— Venus has no magnetic field and would likely have suffered a similar fate to Mars and lost most of its atmosphere if it did not have such a thick reservoir of gases. There are almost certainly other differences; we don’t know because we haven’t been back to the Venusian surface since the 1980s.

What this means is that the path that led Venus to be an unimaginable inferno likely started a long time before a runaway greenhouse could occur.

If the deviation from Earth were initially driven by geodynamics, formation or other non-climate differences (such as the failure to form crustal plates, or poor internal heat circulation preventing a magnetic field) then the boundary between Earth and Venus is likely unrelated to the climate-based habitable zone. Without understanding the history of this second Earth-sized planet in our own system, we have no hope of differentiating between a Venus or Earth around another star.

In 1970, Venera 7 made the first soft landing on Venus and returned 23 minutes of data. Image from Issue #3 of Astrobiology: The Story of our Search for Life in the Universe. The Astrobiology Graphic Histories are available at: https://astrobiology.nasa.gov/resources/graphic-histories/Image credit: NASA Astrobiology Program.

But is this concern unnecessary? While an exo-Venus would not be an interesting place to hunt for signatures of life, we might learn about the formation of our two worlds by exploring the atmosphere of similar planets around other stars.

And this is where we hit a second problem; we don’t understand the atmosphere of Venus.

Models predict that planets that have undergone a runaway greenhouse should have an oxygen rich atmosphere. This is from evaporated water molecules that are broken apart by the ultraviolet radiation from the Sun, causing the constituent hydrogen atoms to escape the planet’s gravity while the heavier oxygen is left behind. Venus’s atmosphere isn’t oxygen rich. It’s full of carbon dioxide and clouds of sulphuric acid.

This leaves us trying to understand the distant signature of alien atmospheres without a good comprehension of the examples we have in our own Solar System.

These arguments present a compelling case for Venus. Yet although three out of twelve proposals for NASA’s New Frontiers Program were for Venus missions, none were selected as finalists last December. The same was true for the last call for the Discovery Program; two out of five finalists for this lower cost mission category were for Venus, but neither were selected despite Discovery proposals being typically more focussed on the inner Solar System. 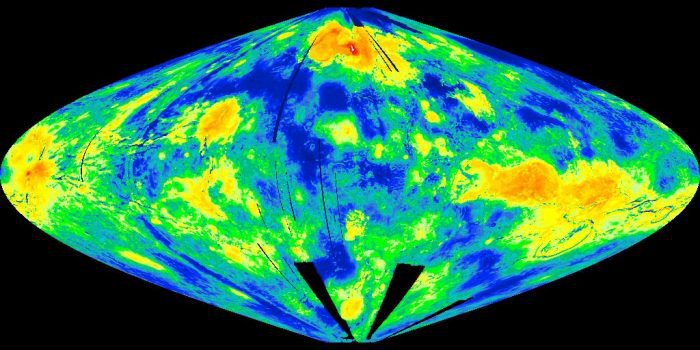 A topographic map of Venus, with sinusoidal projection, based on data from the Magellan spacecraft, which was one of the few missions launched from the space shuttle. It left for Venus in 1989 and mapped the planet until 1994.Image credit: NASA.

Is there a reluctance to go to Venus?

Undoubtedly, planet surface conditions that can melt a spacecraft curbs enthusiasm. The insulation required to protect a probe on the Venusian surface or conduct a short mission will drive costs skyward and may seem a poor return compared to other projects.

Missions to study the Venusian atmosphere would be substantially less risky. The only mission currently operating around Venus is Japan’s Akatsuki orbiter, which last year returned data suggesting mountainous terrain on Venus was sufficient to drive waves through the huge weather system.

In his Nature Geoscience article, McGouldrick proposes that detailed monitoring of Venus’s atmosphere is needed to understand the planet’s history. “To find out why Venus is how it is now, we need to know how it used to be,” he pointed out. 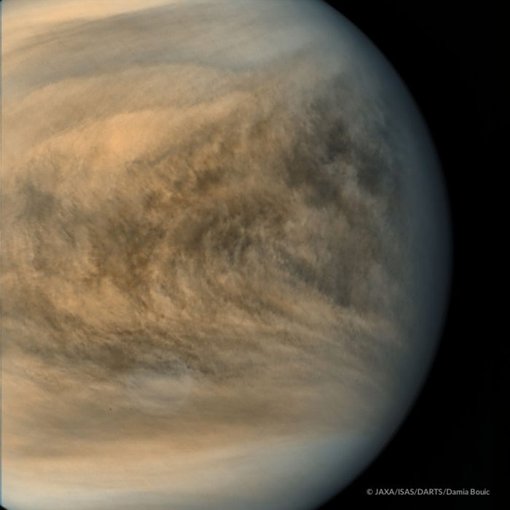 This image of the equatorial region of Venus taken by the Japanese Akatsuki probe provides striking detail of the equatorial, tropical, and extra-tropical clouds of the planet. Color changes indicate local variations in the amounts of a little-understood ultraviolet absorber and sulfur dioxide in the atmosphere.Image credit: JAXA / ISAS / DARTS / Damia Bouic.

This information could be found in the abundances and isotopes (different variations of the same element) of the noble gases on Venus. These unreactive elements are acquired during planet formation, so changes in their quantities indicate losses in Venus’s past of strippable quantities such as atmosphere and water. Comparison with Earth can also indicate if the two planets formed from similar materials, or if part of the dichotomy between these Earth-sized worlds can be laid at the door of compositional differences.

But another orbiter loses out on basic appeal. NASA planetary exploration typically follows the pattern of fly-by spacecraft, orbiters, landers and rovers and then missions to return samples to Earth. Mars exploration is following this list, with the planned Mars 2020 mission collecting samples for possible later collection. Missions to Europa and Mercury are doing the same, albeit at an earlier stage.

But the hellish surface conditions of Venus make this pattern difficult, and the prospect of repeating the orbiter step with better instruments is significantly less enticing.

The solution might be a combined orbiter and lander mission, with data from the orbiter mitigating the risk associated with the lander. Alternatively, an aeroplane or balloon that travels through the upper parts of the Venusian atmosphere might combine originality with data that cannot be achieved in orbit. Designs like these have been proposed for a Russia-led mission with a contribution from NASA, known as Venera-D, but funding remains uncertain.

While a Venus mission did not make into the finalists for the New Frontiers program, funding was given to develop a camera that could measure the mineralogy and composition of Venus’s rocks. This demonstrates a continual interest by mission experts in Venus, but publications by the community suggest this needs to be higher up the priority list.

The bottom line is that visiting our neighbor may present one of the biggest challenges in the Solar System. But exoplanet research may be lost without it.