Meteorite Points to 2 Billion Years of Volcanic Activity on Mars 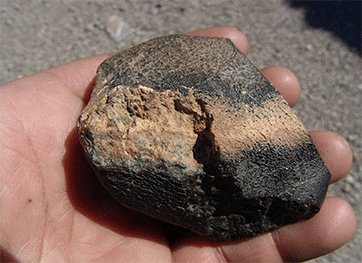 Scientists have confirmed the long-lived nature of volcanoes on Mars, finding meteoric evidence that a Martian volcano or volcanic system was active for over 2 billion years.

A Mars meteorite, a shergottite rock called Northwest Africa (NWA) 7635 originally discovered in Algiers in 2012, was analyzed by Tom Lapen, a geology professor at the University of Houston, with members of the NASA Astrobiology Institute team based at the University of Wisconsin. NWA 7635 is one of eleven Martian shergottites that have been discovered on Earth, sharing similar chemical composition which points to a similar location of origin and time of ejection from Mars’ surface following a large impact. NWA 7635 dates back at least 1.8 million years further than previously analyzed meteorites, providing evidence that Mars may be home to one of the the longest-lived volcanic centers in the Solar System.

The paper, “Two billion years of magmatism recorded from a single Mars meteorite ejection site,” is published in the journal Science Advances.

A press release is available through the University of Houston.

The work was supported by NASA Mars Fundamental Research, NASA Cosmochemistry, and the NASA Astrobiology Institute.