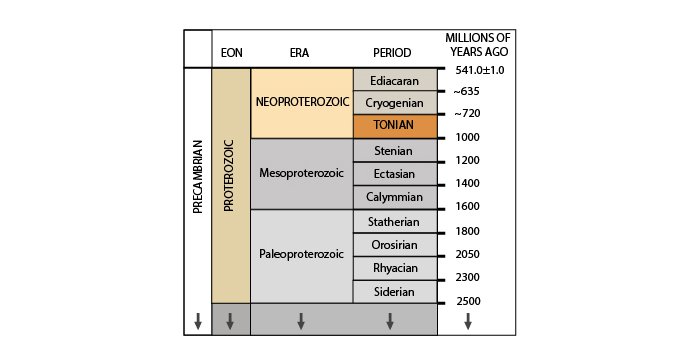 A recent study supported in part by the NASA Astrobiology Program has provided new details about marine ecosystems in the mid-Neoproterozoic. The team studied lipid biomarkers preserved in sedimentary rocks from roughly 780–729 million years ago. The samples are primarily from the Tonian Period, which sits just before the Sturtian glaciation when the planet experienced multiple large-scale glaciation events.

The team of scientists was able to reconstruct details about the environment and types of organisms that emerged in marine communities during the Tonian. The results support the idea that the Tonian was a key interval in life’s history, and represents a time when the marine biosphere transitioned from being dominated by bacteria to an ecosystem where eukaryotes thrived.

The study, “Free and kerogen‐bound biomarkers from late Tonian sedimentary rocks record abundant eukaryotes in mid‐Neoproterozoic marine communities,” was published in the journal >Geobiology. The work was supported by NASA Astrobiology through the Exobiology Program. This newly-revealed science is also a critical part of NASA’s work to understand the Universe, advance human exploration, and inspire the next generation. As NASA’s Artemis program moves forward with human exploration of the Moon, the search for life on other worlds remains a top priority for the agency.