The Search for Organic Compounds on Mars Is Getting Results

Sedimentary rocks of the Kimberley Formation in Gale Crater, as photographed in 2015. The crater contains thick deposits of finely-laminated mudstone from fine-grained sediments deposited in a standing body of water that persisted for a long period of time. Scientists have now reported several detections of organic compounds — the building blocks of life in Gale Crater samples. (NASA/JPL-Caltech/MSSS)

One of the primary goals of the Curiosity mission to Mars has been to search for and hopefully identify organic compounds — the carbon-based molecules that on Earth are the building blocks of life.

No previous mission had quite the instruments and capacity needed to detect the precious organics, nor did they have the knowledge about Martian chemistry that the Curiosity team had at launch.

Nonetheless, finding organics with Curiosity was no sure things. Not only is the Martian surface bombarded with ultraviolet radiation that breaks molecules apart and destroys organics, but also a particular compound now known to be common in the soil will interfere with the essential oven-heating process used by NASA to detect organics.

So when Jennifer Eigenbrode, a biochemist and geologist at the Goddard Space Flight Center and a member of the Curiosity organics-searching team, asked her colleagues gathered for Curiosity’s 2012 touch-down whether they thought organics would be found, the answer was not pretty.

“I did a quick survey across the the team and I was convinced that a majority in the room were very doubtful that we would ever detect organics on Mars, and certainly not in the top five centimeters or the surface.”

Yet at a recent National Academies of Sciences workshop on “Searching for Life Across Space and Time,” Eigenbrode gave this quite striking update:

“At this point, I can clearly say that I am convinced, and I hope you will be too, that organics are all over Mars, all over the surface, and probably through the rock record. What does that mean? We’ll have to talk about it.” 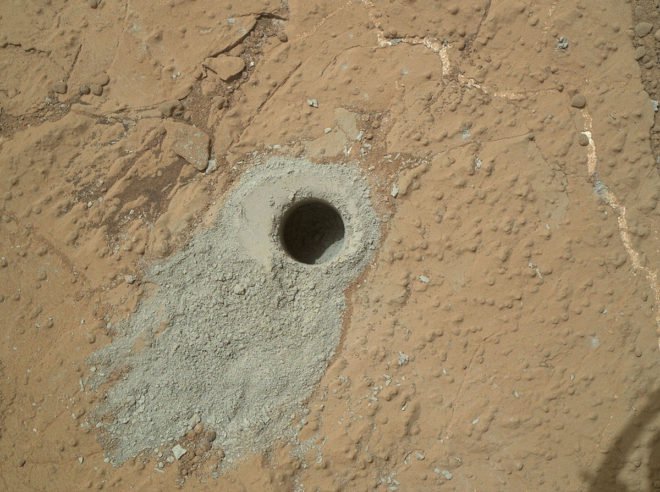 The hole drilled into this rock target, called “Cumberland,” was made by NASA’s Mars rover Curiosity on May 19, 2013. (NASA/JPL-Caltech/MSSS)

This is not, it should be said, the first time that a member of the Curiosity “Sample Analysis on Mars” (SAM) team has reported the discovery of organic material. The simple, but very important organic gas methane was detected in Gale Crater, as were chlorinated hydrocarbons and some nonchlorinated organics. Papers by Sushil Atreya, Daniel Glavin and Carol Freissinet, along with other team members from the Goddard SAM team, have been published on all these finds.

But Eigenbrode’s findings and comments — which acknowledged the essential work of SAM colleagues — move the organics story substantially further.