The Ever More Puzzling and Intriguing “Tabby’s Star” 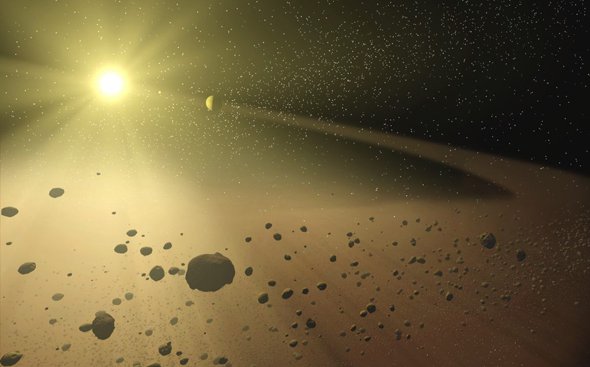 Did Tabby’s star go through periodic and deep dimming because of dust and debris clouds that passed between it and the mirror of the Kepler Space Telescope? That was an earlier explanation for the highly unusual behavior of the star, but new research makes that answer seem less likely. Artist drawing by NASA/JPL-Caltech/T. Pyle

Substantial, sun-like stars are not supposed to dim. They start with gravity- and pressure-induced nuclear reactions, and then they burn brighter and brighter until they either explode (go supernova) or burn all their fuel and become small, enormously dense, and not very bright “white dwarfs.”

Of course, the transit technique of searching for exoplanets looks precisely for dimmings of stars caused by the passage of an exoplanet. But those are tiny reductions in the star’s brightness and are short-lived. So if a star is dimming significantly over a much longer period of time, something unusual is going on.

And that is apparently exactly what is happening with the current poster child for mysterious stars—KIC 8462852 or “Tabby’s star,” named after Tabetha Boyajian, the Yale University postdoc who discovered it with the help of citizen scientists.

First written up last fall, the big news was data from the Kepler Space Telescope showing that the star had experienced two major and dissimilar dips in brightness—a highly unusual and perplexing phenomenon. The dips appeared much too large to represent the passage of an exoplanet, so explanations tended towards the baroque — a swarm of comets, a vast dust cloud, even an alien megastructure (proposed as a last possible explanation). The observation was first identified by citizen planet hunters working with Boyajian, making it an even more compelling finding.