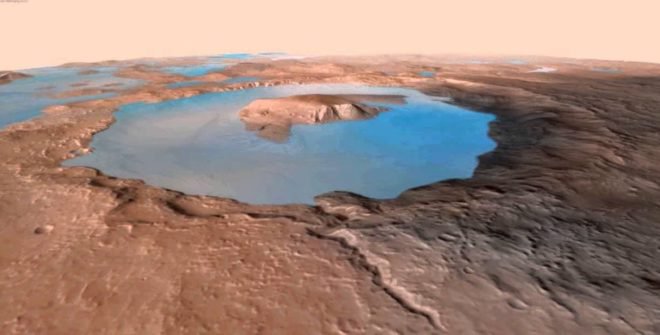 Rendering of Gale Lake some 3.5 billion years ago, when Mars was warmer and much wetter. The Curiosity mission is finding that rocke in Gale Crater changed by water everywhere. (Evan Williams, with data from the Mars Reconnaissance Orbiter HIRISE project)

Before the Curiosity rover landed on Mars, NASA’s “follow the water”maxim had already delivered results that suggested a watery past and just maybe some water not far below the surface today that would periodically break through on sun-facing slopes.

While tantalizing — after all, the potential presence of liquid water on a planet’s surface is central to concluding that it is, or once was, habitable — it was far from complete and never confirmed via essential ground-truthing.

Curiosity famously provided that confirmation early on with the discovery of pebbles that had clearly been shaped in the presence of flowing surface water, followed by the months in Yellowknife Bay which proved geologically, geochemically and morphologically the long-ago presence of substantial amounts of early Martian water.

Some of the earliest drilling was into mudstone that looked very much like a dried up basin or marsh, and that was exactly what Curiosity scientists determined it was, at a minimum. It took many months for Curiosity leaders to ever use the word “lake” to describe what had once existed on the site, but now it is a consensus description.

Since the presence of a fossil lake was confirmed and announced, the water story has taken something of a backseat as the rover made its challenging and revelatory way across the lowlands of Gale Crater, through some dune fields and onto the Murray formation — a large geological unit that is connected to the base of Mount Sharp itself. And all along the path of the rover’s traverse mudstone and sandstone were present, a clear indication of ever larger amounts of water.