About Image
Cross section of the varying layers of the Earth.NASA (Adapted from Goddard Media Studios)
Jan. 27, 2020
Program News

Tales From the Deep Earth

When especially interesting new planets are discovered in the cosmos, scientists around the world begin the process of identifying their characteristics — their orbit, their mass and density, their composition, their thermal properties and much more. It’s all part of a drive that seems to be innate in humans to learn about the workings of the world (or worlds) around us.

This began millennia ago when our distant ancestors started to learn about the make-up and processes of Earth. We now know enormous amounts about our planet, but I was recently introduced to a domain where our knowledge has some substantial holes. The area of the Earth least well understood is, not surprisingly, what lies deep below us, in the mantle — the inner 2,900 kilometers (2000 miles) of the planet between the outer crust and the iron core. 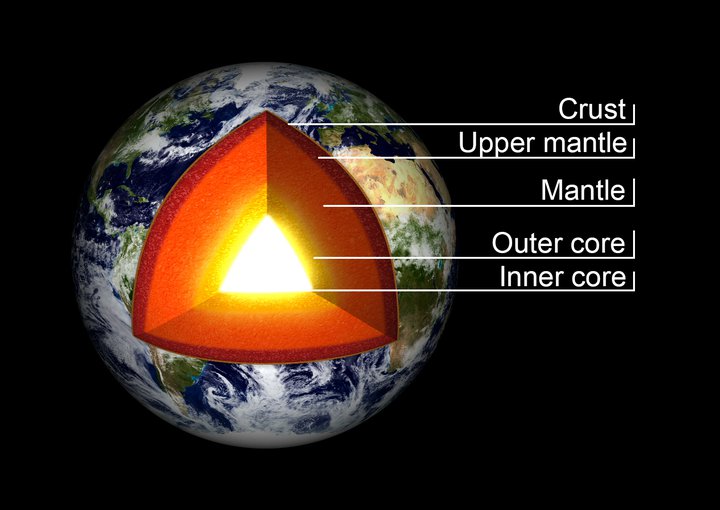 Cross section of the varying layers of the Earth.Image credit: NASA (Adapted from Goddard Media Studios).

The on-going exploration of this vast region — made up substances including some which cannot remain intact on the Earth’s surface — struck me as in some ways comparable to the study of exoplanets. It’s also a realm where scientific observation is limited, but what knowledge is gained then leads through induction, deduction, modeling and exacting lab work to a gradual expansion back of our knowledge.

And in the case of some high-temperature, high-pressure minerals, this has led to a most unusual technique for identifying and naming key components of our inner planet. Unable to reach or preserve some of the most important components of the mantle, geochemists and other deep Earth scientists go to incoming meteorites to learn about what’s beneath (deeply beneath, that is) our feet.

With this in mind, here is a look at the discovery and recent naming of the mineral hiroseite, an unusual but quite widespread component of the very deep Earth. 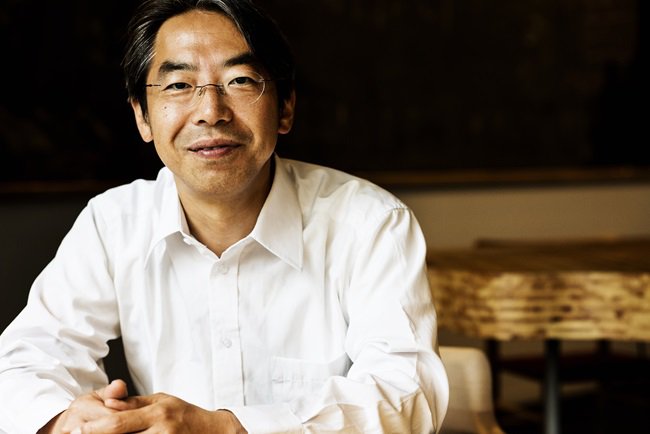 ELSI director Kei Hirose has been honored for his pioneering work in identifying and describing components of the Earth’s lower mantle. In recognition of his work, a newly identified lower mantle mineral has been given the name of hiroseite.Image credit: Nerissa Escanlar.

It was two decades ago when Kei Hirose – a Japanese geochemist expert in high-pressure, deep-Earth phenomena, then at the Tokyo Institute of Technology – began researching a long-standing problem in understanding the working of the lower depths of our planet’s enormous mantle: the last 300 kilomiles above the boundary with the scalding iron core.

Much of the mantle – which makes up an impressive 60 percent of the volume of the Earth – consists of a mineral that few have heard. This most common mineral on Earth is called bridgmanite (MgSiO3), ordered in a particular crystal structure.

The inferred presence of bridgmanite was well established for some decades, but it was only named in 2014 for reasons explained below. There was also an anomaly that kept on appearing when seismologists examined the mantle’s lower depths or “D” layer, some 2,600 to 2,900 kms from the surface. But since bridgmanite in its high-pressure (or “perovskite”) crystal structure was considered to be one of the most stable materials on Earth, many were content to explain the anomaly as being of limited importance.

Hirose – also the director of the Earth-Life Science Institute (ELSI) in Tokyo – instead theorized that the bottom layer contained materials similar to bridgmanite, but with crystal structures changed by the high pressures. And in 2002, he and his lab showed that when the material that is bridgmanite was under enormous pressure, it experienced a phase change into a modified substance. It was given the name post-perovskite because it had a crystal structure that was related to perovskite structure, but was also significantly different.

This discovery led to numerous other advances in understanding how heat from the core is transferred into the mantle and ultimately to the surface, and also how the presence of different deep subsurface materials and conditions result in surface changes, such as in the rate of volcanic activity in a region.

Skip forward now to the summer of 2019. Italian geologist and meteorite analyst Luca Bindi of the University of Florence was studying a meteor that had fallen in 1986 and had been collected outside the Chinese city of Suizhou, in Hubei province in the middle of the country.

Among the tests that Bindi performed over a four year period was one to see what very high-pressure minerals might have been formed along the veins of the meteorite. The shock experienced by meteorites, generally when they collide in deep space, can change the composition and crystal structures of component minerals just as they change under pressure in the deep Earth. But sometimes this occurs in ways that allow the incoming mineral to remain intact on Earth.

Bindi had already made a number of other discoveries from his sample of the Suizhou meteorite and then he found – rather by accident – the mineral FeSiO3, formed with the distinctive perovskite crystal structure.

Bindi knew of the theorized existence of such a mineral – a super-high-pressure iron-rich form of bridgmanite – and understood that it had never been identified in nature before.

What’s more, he said, the physical alterations that form hiroseite provide unique direct evidence of a process some think is responsible for establishing the oxidation state of the Earth’s mantle, and the original formation of the metallic core. So, it could be quite a significant mineral. 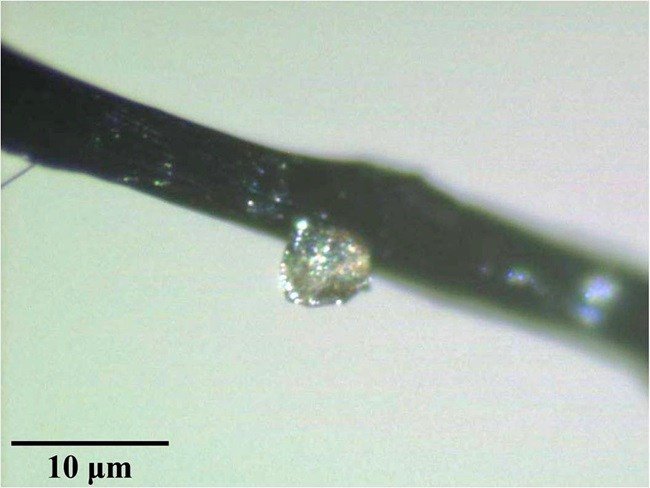 A small hiroseite crystal handpicked from a section of the Suizhou meteorite and used for the X-ray single-crystal diffraction study, which allowed for an understanding of the structural details. The black rod is a carbon fiber which, in turn, is attached to a glass rod that is not visible in the image.Image credit: Luca Bindi.

Hirose and other researchers with him use diamond anvil cell devices and lasers to conduct experiments in order to reproduce the very high pressures and temperatures that act on minerals deep in the Earth.

It turned out that Hirose had also been studying the material that Bindi identified and had been trying to synthesize in his lab, but without success. That, however, is not why Bindi selected hiroseite as the name of the mineral.

As Bindi wrote in an email, “when you discover a mineral which could be so important for the interior of our planet, you have to think seriously about the name you want to assign it. After careful thinking, I decided on ‘hiroseite,’ to honor Kei Hirose, a specialist of perovskite/post-perovskite phases.”

In an article this month in the journal Science Advances, he further wrote that he selected Hirose “for his fundamental contributions to the discovery of the post-perovskite phase in particular, and to the mineralogy of mantle perovskite in general.”

Hirose received an email from Bindi in July informing him that he was going to propose the name hiroseite for the mineral when it went for approval before the International Mineralogical Association. And in August, the iron-rich bridgmanite mineral with the perovskite crystal structure was indeed approved by the association and given a name that would acknowledge the work of Hirose. 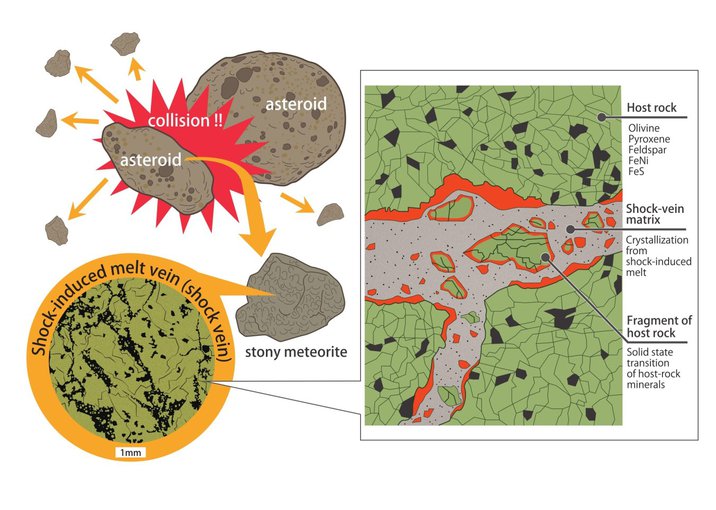 A variety of dense of crystalline elements, oxides and silicates have been found since the 1990s by laboratory high-pressure experiments. In nature, shocked meteorites are the most important sources of high-pressure minerals in addition to impact crater rocks, inclusions in diamond, mantle igneous rock, and ultrahigh-pressure metamorphic rocks. Some specimens can only be computationally inferred because they cannot remain intact under surface conditions.Image credit: N. Tomioka, Jamstec/M.Miyahara. Hiroshima University.

There is a tradition in mineralogy of naming minerals after important scientists in the field. The name bridgmanite, for instance, was given in 2014 and is an appreciation of the work of American physicist Percy Williams Bridgman, who won the Nobel Prize in 1946 for his work in the physics of high pressure.

Because minerals formed under high pressure and high temperatures deep in the Earth’s mantle are not stable on the surface, they cannot be found there. This means mineralogists such as Bindi regularly look to meteorites to find new varieties of high-pressure minerals. The meteorites experience shock and very high temperatures when they collide with each other in deep space, and those conditions can form the high-pressure minerals otherwise present only in the deep subsurface on Earth.

Indeed, the only way to formally identify a high-pressure mineral is from a meteorite. This is because for a mineral to be named, a specimen of it must first be found in nature. And while minerals such as bridgmanite and now hiroseite make up a substantial part of the Earth, they are only stable thousands of kilometers beneath the planet’s surface and, at times, in the veins of meteorites.

The most abundant mineral on Earth, bridgmanite, was named in 2014 after Percy W. Bridgman, recipient of the 1946 Nobel Prize in Physics.Image credit: Public domain.

While bridgmanite is the most common mineral on Earth (by far), hiroseite is significantly less widespread below the Earth’s surface. Nonetheless, Hirose estimated that about 4 percent of the Earth’s matter by volume is hiroseite. This includes both the mineral itself and the mineral as it exists as an iron-rich component of bridgmanite.

There are about 3,800 named minerals on Earth, and some 40 to 50 new ones are formally accepted and named each year.

A major distinction between bridgmanite and hiroseite is that the latter has much more iron, while the former has more magnesium.

Because of the physical properties of iron, hiroseite is significantly different from bridgmanite, Hirose said. Hiroseite can introduce more electrical currents and conductivity into the mantle, and the color and density of the mantle will depend on how much iron is present in the minerals.

And because iron is a heavy element, the hiroseite with increased iron will be found in the lower depths of the mantle, even in the boundary area that touches the liquid portion of the iron core.

For bridgmanite, the peak shock conditions needed to create the mineral in its crystal form are greater than 24 gigapascals (considerably more pressure than that needed to form a diamond) and more than 1,427 degrees Celsius/2,600 degrees Fahrenheit.

Remarkably, the peak shock conditions for hiroseite are 60 gigapascals, dramatically more external pressure than that needed to form bridgmanite. 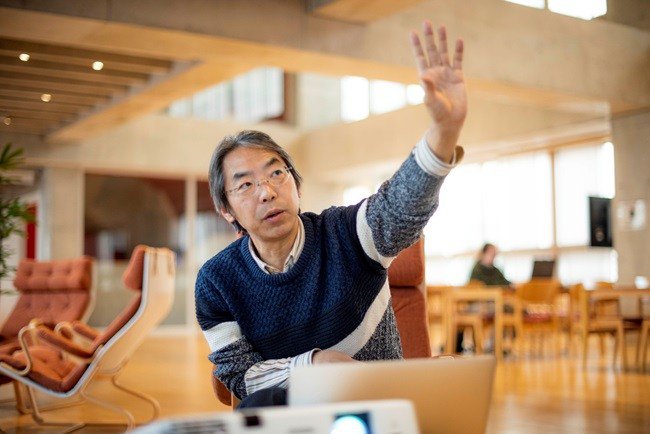 “Finding this mineral in the meteorite is very welcome and more results could come from it,” Hirose said. “We now have a mineral that we had identified computationally but not in a lab.”

Hirose, who has won numerous awards, including the Japan Academy Prize, said it was a “special honor” to have the mineral, or mineral component, named after him. And it was a special honor in part because, he said, it is probably the last high-pressure, deep-Earth mineral that will be named.

That’s because the basic mineral components of the mantle have now been named. What remains unnamed is the minerals with a post-perovskite crystal structure, the ones in the last 300 kilometers of the lower mantle.

They will never get named because they cannot exist anywhere except deep in the mantle, Hirose said. So, after hiroseite, the naming of high-pressure mantle minerals is over.

The next frontier, it would seem, is the minerals and other compounds awaiting discovery on planets and moons in our solar system and beyond.

(This column was adapted from an article that first appeared on the website of the Earth-Life Science Institute (ELSI) in Japan.)