Sulfur is one of the six most common elements found in biomolecules on Earth, and is thought to be essential for life as we know it. Understanding the distribution of sulfur in space can help astrobiologists understand how it might become available for the origin and evolution of life on planets. 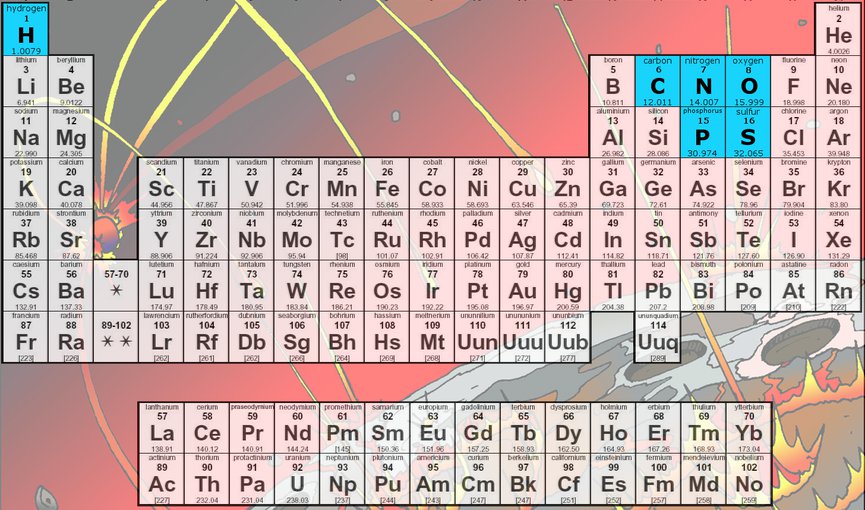 There are more than 25 elements used in biomolecules on Earth, but the most common are carbon, hydrogen, nitrogen, oxygen, phosphorous, and sulfur (CHNOPS).Image credit: NASA Astrobiology.

A recent study sheds light on sulfur chemistry in young stellar objects (YSOs). Researchers used the Stratospheric Observatory for Infrared Astronomy (SOFIA) to examine sulfur dioxide (SO2) gas near a massive YSO known as MonR2 IRS3. The team determined a lower limit for the abundance of SO2 and drew comparisons to the cosmic sulfur budget. SO2 gas was located in a relatively inactive region near MonR2 IRS3, which is presumed to be the hot core. Sublimation of ices in this region would unlock volatile sulfur, allowing for the formation of SO2 gas.

The study, “High-resolution SOFIA/EXES Spectroscopy of SO2 Gas in the Massive Young Stellar Object MonR2 IRS3: Implications for the Sulfur Budget,” was published in the Astrophysical Journal Letters. This work was supported by the Emerging Worlds Program. The NASA Astrobiology Program provides resources for Emerging Worlds and other Research and Analysis programs within the NASA Science Mission Directorate (SMD) that solicit proposals relevant to astrobiology research.