New study looks at the potential for studying the atmospheres of exoplanets in the TOI-270 system. 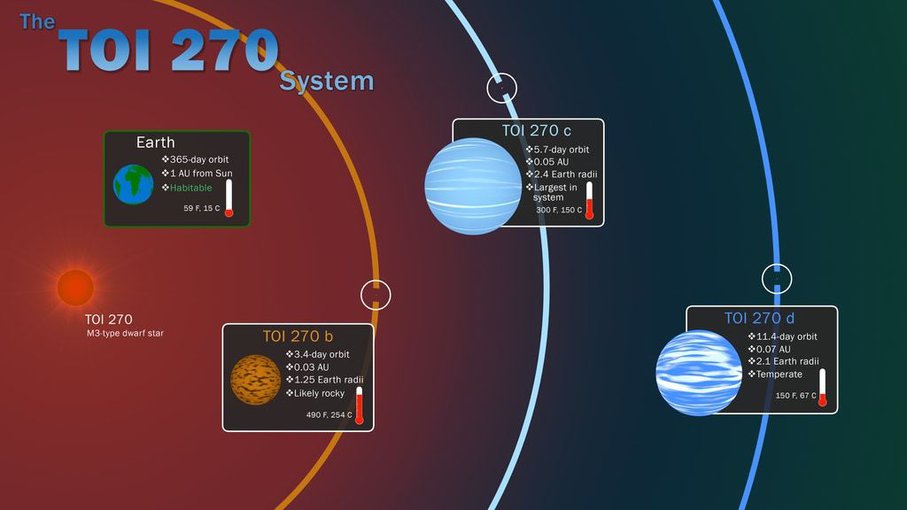 This infographic illustrates key features of the TOI 270 system, located about 73 light-years away in the southern constellation Pictor. The three known planets were discovered by NASA’s Transiting Exoplanet Survey Satellite through periodic dips in starlight caused by each orbiting world. Insets show information about the planets, including their relative sizes, and how they compare to Earth. Temperatures given for TOI 270’s planets are equilibrium temperatures, calculated without the warming effects of any possible atmospheres.Image credit: NASA’s Goddard Space Flight Center/Scott Wiessinger.

A new report from researchers supported by the NASA Astrobiology Program outlines the potential for using the upcoming James Webb Space Telescope (JWST) to characterize the atmospheres of exoplanets in the TOI-270 system. In 2019, three planets were discovered in this system using the Transiting Exoplanet Survey Satellite (TESS).

At 22.5 parsecs (roughly 73 light years) away, TOI-270 is one of the nearest and brightest M-type dwarf stars known to host planets. TESS data was used to identify one super-Earth (TOI-270 b) and two sub-Neptune-sized planets (TOI-270 c and TOI-270 d). The discovery was announced in a 2019 paper in the journal Nature Astronomy.

The recent study focuses on the sub-Neptune planets. The team of scientists modeled theoretical atmospheres for TOI-270 c and TOI-270 d using three different atmospheric compositions (two dominated by hydrogen, and one dominated by water). Infrared transmission spectra were then generated for each atmosphere type in order to simulate what JWST could see as the planets transit their host star.

The study indicates that JWST could indeed detect atmospheres around TOI-270 c and d, and as little as one transit might be required if the atmospheres are rich in hydrogen. Fewer than three transit observations could even provide details of molecular features. If the planets have atmospheres dominated by water, more transits would be required.

The study, “Properties of Sub-Neptune Atmospheres: TOI-270 System,” was published in the Monthly Notices of the Royal Astronomical Society. The work was supported by the Nexus for Exoplanet System Science (NExSS).  NExSS is a NASA  research coordination network supported in part by the  NASA Astrobiology Program. This program element is shared between NASA’s Planetary Science Division (PSD) and the Astrophysics Division. This research is a critical part of NASA’s work to understand the Universe, advance human exploration, and inspire the next generation. As NASA’s Artemis program moves forward with human exploration of the Moon, the search for life on other worlds remains a top priority for the agency.