Scientists from a wide range of fields gathered recently to build a deeper understanding of life and its origin.

Around 80 scientists from a wide range of fields met in November of 2015 for a weeklong conference at the Carnegie Institution for Science in Washington, DC to explore ways to build a deeper understanding of life and its origin.

“We’re hoping for new patterns to emerge from this room,” said Sara Walker, a theoretical physicist at Arizona State University and organizer of the meeting, to an audience of chemists, physicists, geologists, biologists, and complex systems researchers. “The goal is to actually re-envision an entire field of science.”

The setting could not have been more fitting. In the newly renovated auditorium where the lectures where given, a hand-painted mural wrapped around the room depicting heroic scientists and explorers from the past. 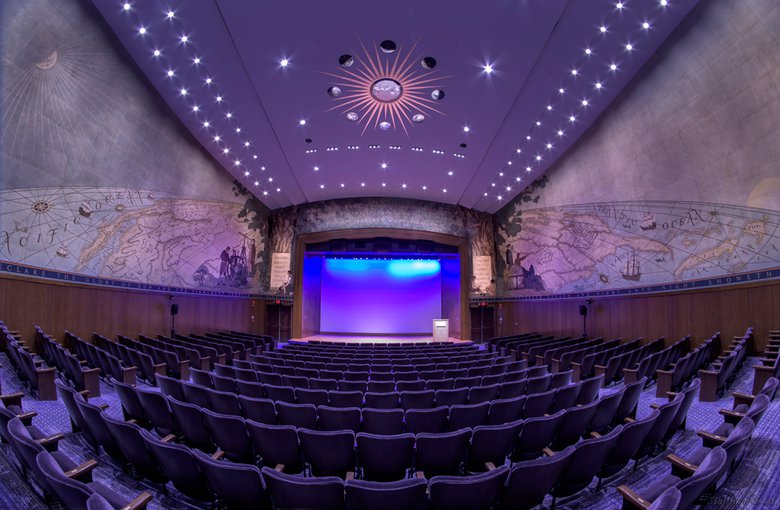 Sixty years have gone by since the famous Miller-Urey experiment jumpstarted the scientific quest for life’s origin. But even though Stanley Miller and others have since shown that life’s building blocks are fairly easy to recreate, chemists have yet to demonstrate how these small molecules then joined to form the first living organisms.

“There’s still a huge gap between the chemistry and the biology,” said George Cody, a geochemist at the Carnegie Institution who also helped organize the meeting. “There is value in figuring out how to make certain molecules, but that doesn’t solve the core questions.”

And so the impetus for the conference was to seek new insight beyond traditional approaches, and to explore more abstract—and perhaps universal—principles that drove the emergence and evolution of living matter. The event was sponsored by the NASA Astrobiology Program, the National Science Foundation, and the Carnegie Institution for Science.

The effort was an outgrowth of a grassroots movement called “Modeling Origins of Life,” MOL for short, which grew from a series of informal workshops organized by the astrophysicist Piet Hut in the US and in Japan in 2014. See this white paper draft for more details. 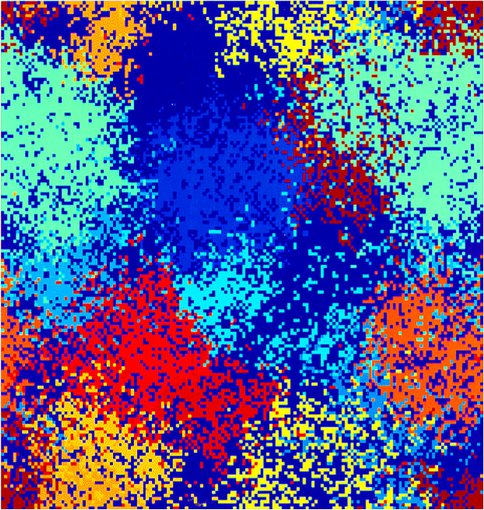 The concept of information allows computational scientists to explore the rules of evolution using “artificial life” programs, as in the Avida software developed by Chris Adami.Image credit: Adami Lab.

“Can we say something about life that’s independent of the chemistry? Yes, we can,” began Chris Adami, a computational biologist at Michigan State University, in the opening lecture titled “Information: What is it, and what is it to Life?”

Adami defines life as “information that can copy itself.” The concept allows computational scientists like him and others to explore the rules of evolution using “artificial life” programs.

One goal is to uncover rules that might allow for “open-ended evolution,” or the ability to generate an infinite amount of complexity—which may be the key to understanding the difference between life and non-life.

In another keynote presentation, Walker proposed the idea that life may actually represent an entire domain of physics we don’t yet understand. What defines life, she argued, is that information affects and controls the world of matter. And so new laws of physics might be needed to unify the concepts of “information” and “matter.”

A related line of thoughts suggests that life could, in fact, be a separate phase of matter, explained the theoretical physicist Eric Smith in a talk titled “Phase transitions in the origin of the biosphere.” Just as matter can be a solid, a liquid, or a gas depending on its thermodynamic properties, matter could in theory be living or non-living depending on its information properties.

The value of viewing life through the lenses of information is that it could potentially be quantified. “The difference between this community and what’s been done before is that we’re trying to transition into a quantitative science,” Walker said.

And being able to measure “aliveness” on an abstract level could provide scientists with tools for detecting potential life forms beyond Earth, which could be built on different substrates than ours. “The concept of information is key to understanding life in the Universe,” Adami said. 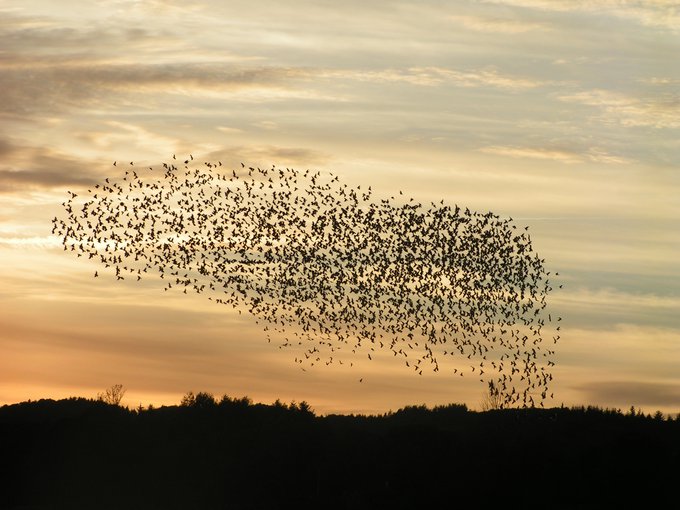 The origin of life may share certain characteristics with the self-organizing swarming behavior of birds.Image credit: Wikipedia.

Life as a Network

Another framework discussed at the meeting was that life’s origin might be best understood as a self-organizing network or as an emergent phenomenon.

Takashi Ikegami, a complex system researcher at the University of Tokyo, described how large groups of molecules before life could have shared similarities with the swarming behavior of birds. In particular, when a flock reaches a critical number, individuals no longer control the behavior of the group from the “bottom-up,” but instead begin acting as a single entity controlled from the “top-down.”

Simon Dedeo, a cognitive scientist at Indiana University who studies the interaction between human minds and societies, offered related insights from the edit patterns of Wikipedia pages. While social scientists can’t predict behavior at the level of individuals, he explained, some highly predictable patterns of competition and cooperation nonetheless emerge. “Maybe this is what the origin of life looked like,” he said. “What if we had behaviors we couldn’t predict at the level of each molecule, and yet have emerging patterns of interaction at higher levels?”

John Baross is a microbiologist at the University of Washington who studies organisms that grow near hydrothermal vents, one popular theorized location for life’s origin. Interestingly, he is currently investigating the idea that the first living thing may have been a large biochemical film, or a “ribofilm,” rather than a small and encapsulated entity.

In a talk titled “The public goods hypothesis for the evolution of life on the planet,” James McInerney, an evolutionary biologist at the University of Manchester, made the case that life should be viewed as a network rather than a tree. The term “public goods,” which he borrows from economics, illustrates the idea that many genes were readily swapped in the beginning, and thus belonged to no organism in particular. Evolutionary history, he said, is as much about merger and integration as it is about Darwinian evolution and competition.

In the end, many ideas converged toward a picture of life’s origin as a diverse community of molecules that became integrated, rather than a lone replicator that began to “selfishly” copy itself. 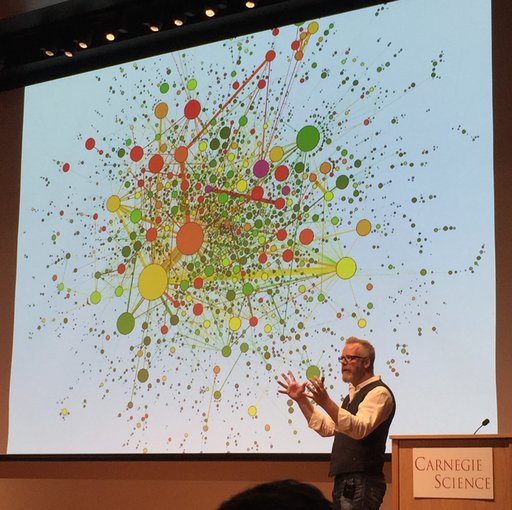 The evolution of life on Earth is a "network" rather than a "tree", argues the evolutionary biologist James McInerney.Image credit: Johnny Bontemps.

From Fruit Salad to Smoothie

But the greatest insight from the meeting may have to do with the behavior of the scientists themselves—namely, that they will need to forge stronger collaborations and integrate their perspectives, if they’re to solve the problem of life’s origin.

For the past 60 years, scientists from various fields have been looking across the fence at each other, one participant noted. And yet, the topic requires the cross-disciplinary integration of knowledge from theorists and experimenters, chemists and physicists, geologists and biologists.

But to achieve this, the community will need to develop a common language, most agreed. Indeed, it wasn’t rare in between lectures to hear chemists admitting that they struggled to understand the talks given by physicists, and vice-versa.

By the end of the week, computational scientists and experimental chemists were indeed planning new projects and collaborations.

“The thing that’s really fascinating about this meeting is the level of collaborative thinking,” Walker said. “There’s a real consensus that we need each other to solve the problem. I don’t think I’ve seen that before.”
For the solution to emerge, in the end, scientists working to solve life’s origin might well have to emulate the very process they are studying.