Science Strategies Chart Course for Detecting Life on Other Worlds

The American Institute of Physics has published an article discussing the recent science strategy releases from the National Academies. The Exoplanet Science Strategy was released on September 5, 2018, followed by The Astrobiology Science Strategy for the Search for Life in the Universe on October 10, 2018.

Read the full article from the American Institute of Physics at: https://www.aip.org/fyi/2018/science-strategies-chart-course-detecting-life-other-worlds

From the American Institute of Physics:

The National Academies has completed a pair of science strategies that Congress required through the NASA Transition Authorization Act of 2017.

An astrobiology science strategy released on Oct. 10 outlines scientific challenges bearing on the search for “biosignatures,” or signs of life, within and beyond the Solar System. The strategy was developed by a committee chaired by University of Toronto geochemist Barbara Sherwood Lollar. Conscious that NASA completed its last astrobiology strategy in 2015, the committee focused on recent developments, particularly on progress toward establishing a “comprehensive framework” for biosignature identification.

A separate but overlapping strategy for exoplanet research released on Sept. 5 was developed by a committee co-chaired by Harvard University astronomer David Charbonneau and Ohio State University astronomer Scott Gaudi. That strategy identifies research on planetary system evolution and the search for habitable worlds as the major goals of exoplanet research, and it spotlights major facilities and research directions it regards as important for advancing the field.

Both strategies are intended to guide the development of NASA’s and the National Science Foundation’s science portfolios. They will do so primarily by informing the upcoming National Academies astronomy and astrophysics decadal survey, and in the case of the astrobiology strategy, the planetary science decadal survey that will follow.

The exoplanet strategy reports that, since the detection of the first exoplanets in the late 1980s and 1990s, astronomers have identified thousands of such objects using several different methods and concluded that “most, if not all, stars host planets.” Moreover, astronomers have characterized a wide variety of exoplanets and discovered unexpected planetary system configurations. They have also successfully obtained information about the atmospheres of some exoplanets and made direct observations of young, luminous gas giants.

Although exoplanet research has made large and rapid strides, the strategy stresses that significant gaps in observational capability and scientific understanding remain, and that a more thorough census of planetary types, including protoplanetary disks, is needed. The strategy also identifies two “overarching goals” for future work: understanding the formation and evolution of planetary systems and learning enough about exoplanet properties to identify potentially habitable environments and ascertain their prevalence in the universe.

In the exoplanet strategy’s estimation, detecting and directly imaging Earth-like planets orbiting within the habitable zone of Sun-like stars should be a priority. Accordingly, it recommends NASA lead the development of a large strategic space telescope capable of performing the task. It does not express a preference between the two mission concepts being prepared for the next decadal survey that could do so: the highly ambitious Large UV/Optical/IR Surveyor (LUVOIR) or the more specialized Habitable Exoplanet Observatory (HabEx). 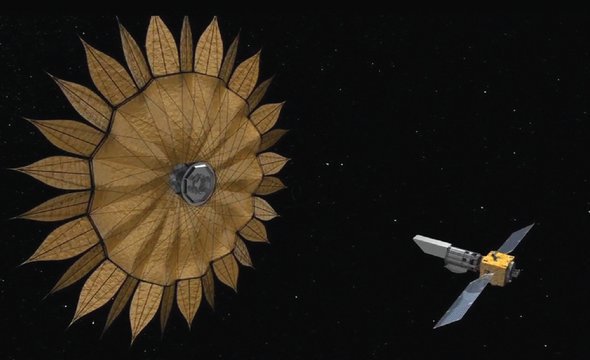 An artistic depiction of the Habitable Exoplanet Observatory and an accompanying starshade.Image credit: NASA / JPL-Caltech.

The exoplanet strategy also recommends NSF invest in construction of both the Giant Magellan Telescope (GMT) in Chile and the Thirty Meter Telescope (TMT) in Hawaii as ground-based tools for exoplanet research.

The astrobiology strategy similarly surveys the capabilities of proposed space-based and ground-based telescopes and instruments, but it makes no formal recommendations in favor of specific projects. It does recommend NASA “implement high-contrast starlight suppression technologies in near-term space- and ground-based direct imaging missions.” These technologies include starshades, which would orbit at a distance from space telescopes to block out stars’ light but not light from their planets, and coronagraphs, which perform a similar function but are integrated into the apparatus of telescopes that can be based on the ground or in space.

NASA’s Wide Field Infrared Space Telescope (WFIRST), which is targeted for launch in the mid-2020s, is slated to include a coronagraph with relatively limited capabilities as a technology demonstration. WFIRST’s funding is currently under pressure from the Trump administration, which has proposed cancelling it, and from cost overruns on the James Webb Space Telescope. The exoplanet strategy recommends the mission proceed and retain its coronagraph to help pave the way for more advanced coronagraphs on missions such as LUVOIR or HabEx that would likely launch in the 2030s.

The astrobiology strategy notes that, equipped with a coronagraph, GMT or TMT would be able to image Proxima Centauri b, an Earth-like planet only four light years away, potentially as early as the mid-2020s. However, it observes that those projects are “struggling” to obtain construction funding and suggests NASA could “hasten progress” by partnering with NSF to support “at least one” of them, “particularly if adaptive optics and a coronagraph are included to permit the detection and characterization of nearby Earth-like worlds.”

The astrobiology strategy makes no recommendations concerning what planetary science missions NASA should prioritize. Concentrating instead on technology requirements for biosignature detection, it recommends the agency “accelerate the development and validation, in relevant environments, of mission-ready, life detection technologies.”

The strategy finds that NASA’s current mission selection processes “emphasize a need for low risk in technological readiness level, which is tied to spacecraft engineering as opposed to science,” and it asserts that that approach “inhibits development and selection of potentially game-changing life detection technologies.” Observing that few fully mature instruments are suitable for life detection in environments such as Mars, Saturn’s moon Titan, or Jupiter’s moon Europa, it urges a shift toward developing “instruments with high science potential even in the face of high development risk.”

Addressing specific technologies, the strategy notes the “absence of a single, mature, flight-ready instrument capable of making in situ measurements of elemental, mineralogical, and organic composition.” It points to the promise of new instrumentation, for example in Raman spectroscopy and optical microscopy, and to the need for instrument suites and sample-handling technologies tailored to the requirements of astrobiology.

The strategy also asserts that the geological sciences have had a strong and persistent influence on the scientific programs of planetary exploration missions, and it suggests that astrobiology be granted a more explicit role. More broadly, it recommends NASA incorporate astrobiological expertise in all phases of its mission planning, from inception and conceptualization through to operations. 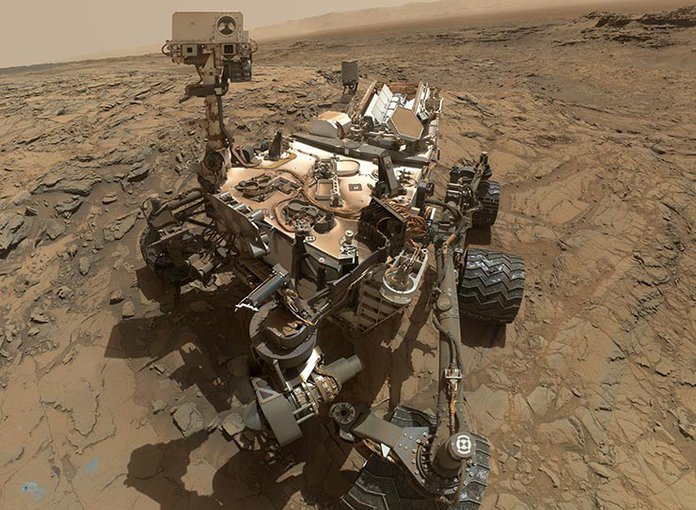 The detection of life elsewhere in the Solar System could depend on the availability of an instrumentation suite that can conduct appropriate in situ scientific analyses. In this image, composed of dozens of photographs, the Mars Curiosity rover is pictured next to a drill hole it has made in the martian surface, seen in the lower left-hand corner.Image credit: NASA / JPL-Caltech / MSSS.

In advocating a comprehensive framework for accurately identifying biosignatures, the astrobiology strategy spotlights a series of questions that have recently been under consideration but still require answers. For instance, it stresses the need to define biosignatures that would be “agnostic to life’s molecular makeup or metabolism” as well as what signatures might offer false positive or false negative indications of the presence of life.

The strategy suggests approaches for addressing such problems, such as further considering how biosignatures might reflect the coevolution of a planetary environment and the life found within it. It also urges attention to “abiosignatures” arising from non-biological processes in a variety of environments, pointing to the difficulties that can attend the interpretation of signatures in Earth’s own stratigraphic record.

Given that the variety of manifestations of life on Earth could hold clues to identifying life elsewhere, the strategy also recommends further study of the early history of life on Earth and of biological processes found in ephemeral and extreme environments, such as deep in the continental subsurface.

In general, the strategy stresses that astrobiology needs to be understood as a “transdisciplinary” field that requires “systems-level thinking.” It recommends NASA and other agencies actively foster interdisciplinary and cross-divisional collaboration to deepen connections between fields such as astronomy, geology, and biology, and more fully integrate the study of exoplanets, the Solar System, and life on Earth.