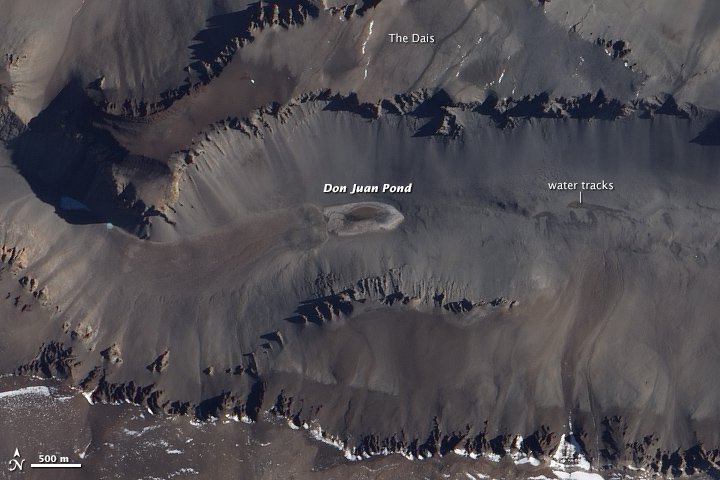 Don Juan Pond is an ankle-deep pond in the lowest part of Upper Wright Valley of Antarctica, and is so salty that its calcium-chloride rich waters rarely freeze. (Image by the Advanced Land Imager (ALI) on NASA’s Earth Observing-1 (EO-1) satellite).Image credit: NASA/JPL-Caltech.

A shallow, briny pond located in what is often considered one of the most Mars-like regions on Earth is probably being fed by groundwater seeping up, rather than moisture seeping down from the atmosphere, providing clues as to what stores of liquid water, if they exist, might look like on Mars.

The Don Juan Pond, found in Wright Valley among the McMurdo Dry Valleys in Antarctica, is one of the saltiest pools of water on the planet, even more so than the Dead Sea. Covering an area 100 by 300 meters (328 by 984 feet) but just 10 centimeters (~four-inches) deep, the pond contains enough salt for the water to remain liquid even at –50 degrees Celsius (–58 degrees Fahrenheit), typical of temperatures on Mars.

In 2013, researchers suggested that the pond received its salty water from snowmelt and moisture condensing out of the atmosphere, with the water trickling downhill and leaving dark tracks. These tracks are reminiscent of the Recurrent Slope Lineae seen on Martian hills and which are thought to be formed by seasonal flows of salty water, although no such flows have ever been witnessed on Mars.

Putting this theory to the test, researchers led by Jonathan Toner, who is a geochemist and assistant professor at the University of Washington, ran two simulations, one where the pond forms from a deep groundwater aquifer, and the other where moisture from the atmosphere seeps into the lake from above. Toner’s team found that the distinct chemistry, rich in calcium chloride, is best produced by an extensive groundwater aquifer. The calcium chloride forms when briny films percolate into the frozen soil and interact with minerals. 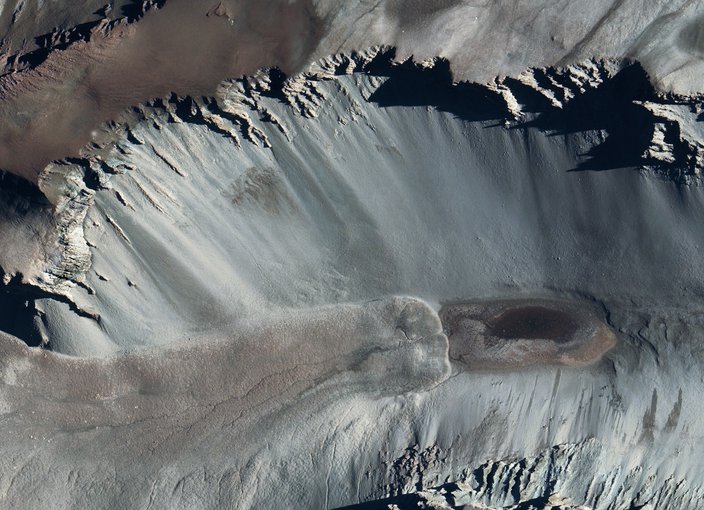 The dark streaks, which the 2013 research suggested was snowmelt trickling downhill, are also enriched in calcium chloride, suggesting they are also produced by the aquifer.

“Where else do you have salt-rich, cold soils? The entire planet of Mars!” Toner tells Astrobiology Magazine. “We think that similar calcium chloride plumes could underlie much of Mars’ surface and, as in the Dry Valleys, upwelling groundwaters on Mars could form Recurring Slope Lineae.”

Toner says that the jury is still out on whether Don Juan Pond’s salt levels are too extreme for life, but nearby lakes that are presumably fed by the same aquifer do have life. By extension, it leaves the door open for life existing in similar environments on Mars.

In December, Toner will embark on a NASA/NSF-sponsored expedition to Don Juan Pond to measure its chemistry, take soil samples and determine how the pond changes over time, putting his model to the test.

The research, published in Earth and Planetary Science Letters, was supported through NASA’s Habitable Worlds Program. NASA Astrobiology provides resources for Habitable Worlds and other Research and Analysis programs within the NASA Science Mission Directorate (SMD) that solicit proposals relevant to astrobiology research.