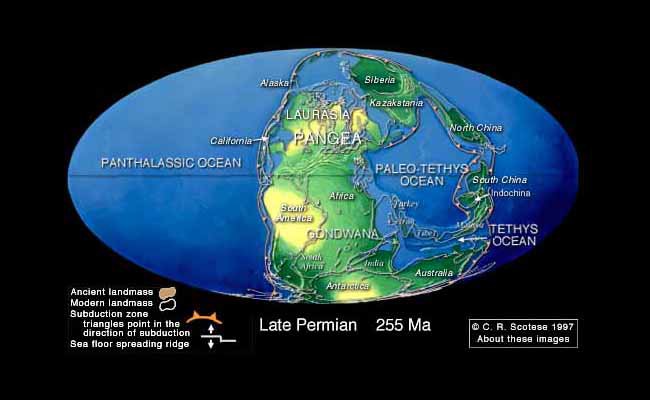 An artist representation of what the supercontinent Pangaea may have looked like 255 million years ago in the late Permian.Image credit: USGS.

New research in the lowlands of south central Kansas is refining astrobiologists’ understanding of the Pangaea supercontinent during the middle Permian. The study was supported in part by the Exobiology program and focuses on a geological unit known as the Permian Hutchinson Salt Member.

The results challenge the idea that the Hutchinson Salt Member was formed through deposition in a marine environment. The lack of marine fossils and the absence of certain marine minerals indicate that the Hutchinson Salt Member was “most likely deposited in an arid continental setting.” The researchers outline how the lithologies could have formed from mudflats and surface brines that were periodically flooded. In these conditions, salts would have been left by evapoconcentration and desiccation.

Interpreting the ancient geology of the Earth can help astrobiologists better understand the environmental conditions that have helped shaped the evolution of the Earth’s biosphere, and ultimately the planet’s habitability. The Permian period is of particular interest because it ended with the Permian–Triassic extinction, the largest mass extinction event yet known in our planet’s history.

The study, “Using sedimentology to address the marine or continental origin of the Permian Hutchinson Salt Member of Kansas,” was published in the journal Sedimentology. The work was supported by NASA Astrobiology through the Exobiology Program. This newly-revealed science is also a critical part of NASA’s work to understand the Universe, advance human exploration, and inspire the next generation. As NASA’s Artemis program moves forward with human exploration of the Moon, the search for life on other worlds remains a top priority for the agency.