Red Dwarf Stars and the Planets Around Them 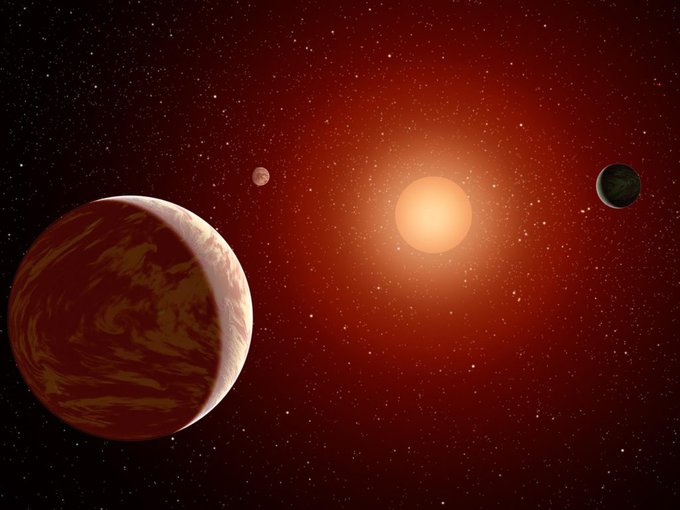 Artist rendering of a red dwarf or M star, with three exoplanets orbiting. About 75 percent of all stars in the sky are the cooler, smaller red dwarfs. (NASA)

It’s tempting to look for habitable planets around red dwarf stars, which put out far less luminosity and so are less blinding. But is it wise?

That question has been near the top of the list for many exoplanet scientists, especially those involved in the search for habitable worlds.

Red dwarfs are plentiful (about three-quarters of all the stars out there) and the planets orbiting them are easier to observe because the stars are so small compared to our Sun and so an Earth-sized planet blocks a greater fraction of starlight. Because planets orbiting red dwarfs are much closer in to their host stars, the observing geometry favors detecting more transits.

A potentially rich target, but with some drawbacks that have become better understood in recent years. Not only are most planets orbiting these red dwarf stars tidally locked, with one side always facing the sun and the other in darkness, but the life history of red dwarfs is problematic. They start out with powerful flares that many scientists say would sterilize the close-in planets forever.

Also, they are theorized to be prone to losing whatever water remains even if the stellar flares don’t do it. Originally, it was thought that this would happen because of a “runaway greenhouse,” where a warming planet under a brightening star would evaporate enough water from its oceans to create a thick blanket of H2O vapor at high altitudes and block the escape of radiation, leading to further warming and the eventual loss of all the planet’s water.

The parching CO2 greenhouse of a planet like Venus may be the result of that. Later it was realized that on many planets, another mechanism called the “moist greenhouse” might create a similar thick blanket of water vapor at high altitudes long before a planet ever got to the runaway greenhouse stage.

Finally now has come some better news about red dwarf exoplanets. Using 3-D models that characterize atmospheres going back, forward and to the sides, researchers found atmospheric conditions quite different from those predicted by 1-D models that capture changes only going from the surface straight up.

One paper found that using some pretty simple observations and calculations, scientists could determine the bottom line likelihood of whether or not the planet would be undone by a moist greenhouse effect. The other found that these red dwarf exoplanets could have atmospheres that are always heavily clouded, but could still have surface temperatures that are moderate.

The new studies also enlarge the size of the habitable zones in which exoplanets could be orbiting a red dwarf or other “cool” star, making more of them potentially habitable.